“The chick got her name for having eight vaginas”

For those without comedic tastes, the so-called experts at Wikipedia have an article about Octopussy.

Octopussy is the second-to-last James Bond film to feature Roger Moore. Released in 1983, it was Directed, Produced, and Scored by Jimmy Page and co-starred Stevie Nicks. It is not to be confused with the pornographic film of the same name.

That's right. For those of you stupid enough to think that this article refers to a perverted description of Octomom's latest pornographic flick, you either weren't around in 1983, or you are so perverted that you are beyond the assistance of your local psychiatrist or counselor. Your cat should be facepalming itself by the time you are done reading this sentence.

Octopussy was among the last Bond films to be written by Ian Fleming. Loosely based on an experience Fleming had in the Navy during WWII with an Persian lady whom had eight vaginas. Unknowingly, Fleming had killed the woman's father earlier in a game of Strip Poker gone awry, but had given him the chance to put on his boots and hat before shooting him, an act that led to him gaining his daughter's respect and keeping him from being eaten by 300 Spartans later.

Roger Moore was still serving his sentence as Bond (To hide from the bizarre Vagisil Campaign) and Jimmy Page had nothing to do except play the Theremin with his teeth, so he was selected to Produce and Direct the film. Stevie Nicks had recently signed on with MGM's record label, Pussy with Big Teeth Records and received the Bond girl position to cover the costs of her recording sessions and as a tax write off.

Filming took place in India, Persia, Kansas and Sparta in 1981 all at the same time, C.G.I. was later used to add Roger Moore to each locale that he was not int, an at the end of production four separate films were made, each with the same story and dialogue, but with a different setting. This idea was later scrapped and only India, and Persia were kept. The other two films were used as stock footage for the next five 007 films.

This film was released in the same year as the shit film Never Say Never Again, with their results at the box office being known as the 'Battle of the Bonds' (This title would be used again to describe the fight between Daniel Craig and Cubby Broccoli). The title Octopussy was used as a form of Clickbait to get more viewers than the other film. The film made slightly more money, and thus Moore was spared for the time being.

The film's exposition has Bond in Cuba dressed as a strange Blonde Cuban Commander with the assistance of his horse and a fake mustache. He leads a botched attempt to destroy his BD-5J "Acrostar" before running away in a jeep with a Native American lady, then somehow bond finds himself in a glider with enough fuel to make it to Flordia and escapes Cuba, leaving a confused group of soldiers, some rubble, and a disappointed lady. 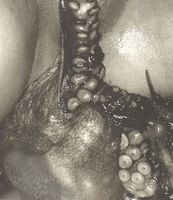 Something only 007 could satisfy.

A clown is running through the woods with a large golden easter egg, it is assumed he was playing Oddball with some men chasing him with guns, further reinforcing the Halo theory, regardless he dies and leaves the easter egg behind, candy inside and all. Bond is told of this and takes off to Persia to meet up with his taxi-driver friend but is instead captured after a torrid game of strip poker, which ends in him spending several nights in a 11th Century Castle offering to give large bearded guards "Nightcaps", that is, until he seduces some ladies and then climbs out through the basement and escapes, somehow finding the magic easter egg in the process.

Later at his hotel, after sleeping with a nice lady with eight vaginas, she jumps out the window with the easter egg (yet casually) and Bond is forced to start over again looking for this egg. 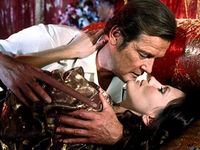 After running through the jungle, riding some elephants, and swimming through a swamp all Big Boss style, 007 finds himself at a isolated resort filled with young, attractive, bi-sexual guests. Unable to resist his urges, Bond infiltrates and finds Octopussy (noticeable by her little octopussy. Despite all the ladies with guns and the danger, Bond seduces her, and she reveals the fact that she both respected and was attracted to him because he gave her father the respect of allowing him to put on his boots, and hat, before he killed him after a botched strip poker match eight years earlier in Korea. She gives him the Easter Egg, They make love, and some people attack the resort, while Bond and his new aging love (both are well over forty) ride Crocodiles out of the Swamp. 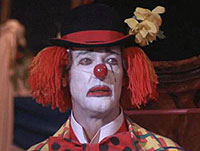 Probably not Bond's finest hour, but original none the less.

Somehow, Bond loses track of Octopussy again, it is implied that shes captured, but 007 finds himself in Russia at a carnival, dressed as a clown, chasing the killers of the other clown (Revealed to be 009) that are actually trapeze artists. He somehow finds out about a nuclear bomb that is hidden inside an elephant at the Carnival, and has to make his way back by driving a Oldsmobile on train tracks through 300 Spartans while dressed as a clown. He also, for probably the first time in a Moore Bond movie, shoots a man pointblank in the urethra.

Now dressed as an insane clown, Bond finds the elephant in time, but cannot get to the bomb-and discovers Octopussy is in attendance to this carnival, against her will, so he enacts her Octopussy-and at the last moment neutralizes the bomb with ink from her Octopussy. Effectively saving the day and then he kills some more Russians.

A flight back home on a private jet turns into terror when some strange men attack Bond and Octopussy's plane, yet 007 fights them off, and then they lead a raid on some guy's castle. Then ride off into the sunset on a steamboat. 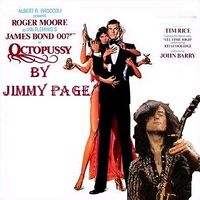 Despite the aging Roger Moore, and somewhat drawn out and strange plot, Octopussy faired decently with critics, it was cited for its lack of Elvis references.

The film generated 12 million in its first week in theaters, but managed to successfully play for 2 months, raking in over 92 million at the end of its Theater rounds.

The film was released on VHS in January 1984, with no support for Beta or DOS. There was an Official Atari 2600 adult video game released in 1985 (Sadly at the death of Atari) and the official soundtrack, recorded by Jimmy Page alone, was released two months before the film on August 7, 1983 to some success, although a major spoiler was contained on the packaging-in the form of Roger Moore wears a clown costume. The long awaited DVD version includes deleted scenes, including that of Bonds love scene with M, Q, and John Cleese, as well as Bonds regeneration back to Sean Connery. Connery spontaneously combusts during a game of pitch and toss with Jasper Carrot, and reappears as Roger Moore. These scenes were taken out of the final cut despite their clear OSCAR winning potential.