If you're some kind of "normal" person who isn't turned on by lolis you might have been looking for The LOLocaust.

The Lolicaust (or The Rorikaust),implemented in 1938 , was the third solution designed by Adolf Hitler and Oprah Winfrey to solve the problem of the Jews. After the failure of both the Furricaust and the Wikicaust, the Nazis decided a more drastic measure was required. 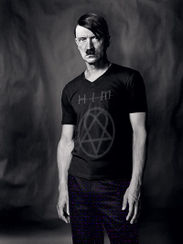 Hitler, Oprah's emo minion, was the mind behind the Lolicaust

The leaders of the movement met in Lolishmïdstmächtang, Germany to discuss their plans to make all the Jews fap themselves to death and, following a twelve day summit, came to the conclusion that the only thing hot enough to cause fapping on such a large scale was lolicon.

Following Germany's defeat in WWI: The Wart To End All Warts by a bunch of Commies and Pansies, the people were a little bit annoyed and disillusionisationed about the Weinersühkkerzachts Government who were being lame and stuff. It was in this atmosphere that Oprah Winfrey was able to propel her emo minion Adolf Hitler to power. Once in power, Adolf set about removing the problem of the Jews, the only power who stood between Oprah and world domination.

The first proposed solution to the problem of Jews, based on an assumption that they were all zoophiles, was to throw pictures of furries off cliffs in the hope that the Jews would chase them off, thus falling to their death.

A picture depicting someone (possibly a Jew) falling to their death.

Unfortunately, this plan only led to the needless deaths of thousands of innocent lemmings, who, mistaking the pictures of furries as their king, jumped off after "him".

Following this failure, the second solution, codenamed the Wikicaust (German: Wïkïkäüst) was proposed. The aim of this solution was to make all the Jews into Wikipedians so that they would die due to having no lives at all. The solution was broken down into three steps:

Although it seemed simple enough, the plan failed in stage two as the Jews weren't fucking retarded enough to utilise the "wikipedia"; the "wikipedia" did, however, go on to become a haven for losers from all over the world and is now operated by Jimbo Wales, the man Hitler employed to create it, as a front for illegal drug trafficking.
Although this solution yielded far better results than the first one, it still failed.

The second solution may have failed, but it had addicted all the Jews to the internets. Because of this, the Nazi regime were able to utilise the Shnëidenhüözen-Klaptrachtweiner Theorem to devise a plan so clever that their brains would explode if they even began to know what they were talking about.

is the Klaptrachtweiner Correction Factor

is number of websites

is number of internet users not on crack

is time (in seconds) since the creation of the internets

is the number of stars visible with the naked eye from the top of Mt Fuji on July 3rd, 1968

is the percentage of internet users who are paedophiles.

Obviously, this proves that within 2.71828183 minutes of the Wikicaust's failure a high enough percentage of Jews (

) would be paedophiles that an attack via lolicon could not fail.

With this in mind, Hitler made an alliance with Italy then, realising that this would do nothing to further his goals, with Japan. The terms of this alliance allowed Hitler to take a crack squad called the Japanese Anime and Manga Creators and Artists of Teapots (or JAMCAT) from the Emperor's personal guard. JAMCAT, once in Germany, were used to create enough lolicon to fill every server that Germany's resources could pay for. (Editor's Note: This is quite a lot of servers - where do you think the expression "rich as Nazis" came from?) This was step one (or IchZiechreichsteinberginskarhhtchtk). Step two, spread the lolicon so that all the Jews fapped themselves to death, was dubbed Operation SPLOTCUMSFAIDE (SPread LOli To CaUse MasSive FApping Induced DEath). 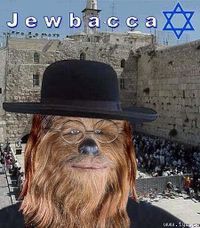 Jewbacca is the real "King of the Jews"!

Unknown to Hitler, Oprah, JAMCAT and the Nazis, however, the Jews had discovered the secret plot and their leader, Jewbacca, launched a daring assault upon Castle Wolfenstein. After killing all the Guards, Dogs, SS Soldiers, Mutants and Officers, Jewbacca courageously entered the inner sanctum of the castle. Here he found and destroyed the all the servers being used to host the lolicon (much to the disappointment of me and you) before making his escape.

Results of the Failure of the Lolicaust[edit]

Everybody was pretty pissed off at Jewbacca for destroying the world's supply of lolicon so God gave Hitler permission to exterminate the Jews in what would be named The Final Solution. Then later renamed Operation: Kill Everyone Who Doesn't Agree With Everything We Stand For, Even If They Are Completely Innocent (or Op:KEWDAWEWSFEITACI) for two minutes before being having it's name reverted by some stupid wikipedian.

The moral of the story is: Germans are crazy, Jews are jewish (but Wookies aren't) and I fap to lolicon.