Kettlebells - Russia's way of overcoming Chernobyl. With so many birth defects, why not be a bit ripped to make up for it?

For those without comedic tastes, the so-called experts at Wikipedia think they have an article about Kettlebell.

The kettlebell, cannonbell or girya (Russian: гиря) is a cast iron weight somewhat resembling a cannonball with a handle. This particular weight is one of the world's best weights, though only poor gyms have tend to have it, mainly due to wealthier ones being able to afford more gizmos and more expensive protein shakes. Unlike other weights, it is not only used for its health benefits, but also because it looks amusing when someone is using them.

The unique kettlebell technique follows a kind of "Ultimate Workout" which forces an average user to vomit after doing too many repetitions. According to the hard bastards that use them regularly, this means they are "weaklings."

It has been commented by many that only a masochist would subject themselves to so brutal an exercise with this arguably archaic implement of self-torture. However, the results are anything but mediocre; the world famous "Mad Monk," Grigory Rasputin famously commented that, "Abuse is the joy of the soul." It is with this sentiment that the budding fitness enthusiast should approach the use of kettlebells. 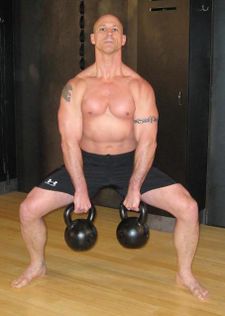 A Russian man using kettlebells - it doesn't get more awesome than that. The move being practised here is called "ball flinging."

The modern kettlebell was developed by Russian author Alexander Pushkin, who wanted to increase his fitness levels whilst saving money, as no one wished to buy his critically panned poetry. He also wanted to cheat in pistol duels with unruly suitors to his wife and mistresses.

He found kettlebells to have very pleasing applications in the field of pistol duelling, and after much toil between duels Pushkin found that a midget flinging a kettlebell through the duel whilst he was firing at his opponent was quite useful as well as difficult to penalize. The nature of the scam was that Pushkin would shoot the flying kettlebell in mid-air as it passed between them, instead of his opponent, and this would result in a molten spray of hot water/lead to fly over his fellow dueller, along with iron shrapnel. In most cases, this would inflict horrific injuries or very slow deaths for these opponents, which pleased the vindictive part-moor Russian no end.

In his most famous book Eugene Onegin, Pushkin has his protagonist Onegin comment on the madness of and unequal rulings of fate on our emotions. In this selection from one of Eugene Onegin's Sonnets, Pushkin expresses this in relation to losing his kettlebells under his bed:

My Kettlebells! Where are you banished?
Lend ears to my lugubrious tone:
Have other maidens checked me out, since you vanished,
Taken your place, though not your throne?
Your grunting and swinging, is it dead for ever?
In Russia's Terpsichore, shall never
Again I see your soulful flight in my arms?[1]

Of course, the midget not only had to be trained to fling the kettlebell at precisely the right time while avoiding hurting himself, but also avoiding the injury which he would imminently face were his throw to be spotted by the referee. Therefore Pushkin, being the world's greatest scam artist and polymath, made him a specific kettle with a weight to train his throw. The rest, they say, is history and kettlebells have endured to the present day thanks to the "genius" of Alexander Pushkin. 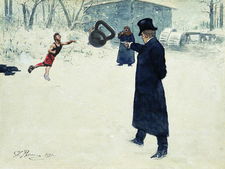 An illustration for the 1898 publication of Eugene Onegin. It depicts of one of Pushkin's most famous character's, Eugene Onegin, practising his duelling technique with his favourite midget. Lovely stuff.

Kettlebells can also be found in the works of Fyodor Dostoyevsky. He is thought to have used them himself and mentions kettlebells in many of his novels; they appear in Crime and Punishment and can also be inferred by references in Notes from the Underground, where the protagonist is typically depressed - most likely from not using kettlebells, but the most notable appearance in Dostoyevsky's literature is in The Devils. Here, the character Nicholas Stavrogin tells his acquaintance Shukov that he's going to get plugged for talking to much about the "Nihilist Revolutionary Conspiracy":

"I'm off to work out after pumping half this highly dysfunctional town before moving back to Moscow where my nonce behaviour caused a bit of stir. You understand that my weasel priggish friend Peter Verkovensky wants you dead and if you're not careful you'll be on the gallows of his madness..."

Stavrogin then goes onto say,

"That's why I'm recommending that you leave and do not return even though your wife is about to have a baby, that being said you could go for an intensive training regime with kettlebells to halt your imminent death at the hands of these insane revolutionaries. In no way do I agree that our conversations seem awkward and bizarre. You're a pathetic worm, but somehow the ignobility of saving you appeals to my suicidal temperament."[2]

Of course, in the end Shuckov gets plugged, and his wife ends up popping out Stavrogin's sprog. What Dostoyevsky does show, however, is that kettlebells have a part to play in a spiritual effort which does not necessarily guarantee redemption. He also uses kettlebells as a symbol of strength for the characters, especially Stavrogin, who, even when not shagging or chewing people's ears off, is often depicted as using kettlebells.

Among other famous references, there exists a version of Leo Tolstoy's The Death of Ivan Ilyich[3] which includes a brutal 'alternative ending', titled by Tolstoy himself as the "Knockout End". In it, the terminally ill Ilyich is taken outside in the snow, instead of repenting of his sins on his deathbed for his ultimately superficial existence. Then all of the characters gather together with kettlebells, including his dead parents, and slowly and brutally beat Ivan Ilyich to death. This highly allegorical alternative ending was thought to be too confusing for the Russian intelligentsia who would have seen the end as being a sell-out for a just another violent and emotionally heart rending ending to a novel. 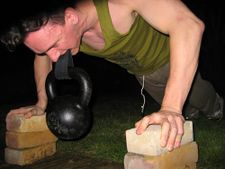 Russia's equivalent to Carl Andre expresses in allegory and art the nature of the Russian soul by holding this position with a kettlebell in his mouth for three years non-stop (except for toilet breaks) at the Tate Modern in 2002.

Vladimir Putin is the Russian Prime Minister and looks buff (and very waxed) for a man in his fifties or sixties, or however old he is, and he uses kettlebells.

Kettlebell techniques are well known throughout Russia, where using kettlebells is compulsory education after the Russian authorities slashed the education budget to its lowest since the early 1990s. The techniques themselves, however, span hundreds of years when men would show their prowess with them and also intimidate foreigners with them. This is done today throughout Russia mostly towards western journalists wanting to show the 'real' side to Russia. More the better with kettlebells for the Russian government and society, and the entire population is hooked on kettlebells... and Vodka.

The four most famous for producing fits of laughter and vomiting are as follows:

There are many other techniques to be found on Wikipedia or on other websites across the Internet; the sheer amount of slow talking Americans with health tips is amazing. It's a pity more Brazilians don't speak English, or any other nationality for that matter, to counterbalance the Americans. Of course, you could just make up your own moves instead of sensibly learning from health professionals!

Kettlebells can also be used as a running aid, and many Russian peasants can be seen running with kettlebells - one kettlebell is held in each arm and one is forcefully attached to the scrotum. Although the traditional peasant runs are only 5km, their fitness levels go through the f**king roof. It is not a technique to be attempted in many municipal areas, however; most of Western Europe will section such individuals trying this under their respective mental health acts.[citation needed]

No need to worry about being a flabby bastard now; you're smashed on the vodka and have started to notice your superior core strength during that brutal bar fight that spilled out into snow and poverty that surrounds your local tavern. You will also discover you have much stronger pelvic muscles for Pumping animals and Hairy Russian prostitutes. No wonder you're smiling. Life is finally going your way, thanks to kettlebells.

You'll also find that you look cooler than guys who are just using dumbbells or barbells. They're just making it easy for themselves, and nobody really digs that, especially not Russians. A bit of the cold and a brutal session with kettlebells is what the doctor ordered. You could also spend some time committing crimes or hanging out with the lowest echelons of society, now. Most Russian authors do this and it gets them jacked up for some novel writing and also lures cougars and heiresses to pay off their debts, thanks to their big guns and 'artistic talent'.

You may also end up looking like a complete twat. A twat with amazing muscles, though. This might not, however, persuade a user to consider their safety. It should be known that many Russian secret police also place cameras in kettlebells in the hope of getting some bathroom shots of naked people, or that kettlebells are often thrown and have subsequently landed on many a Russian's head; they however have much thicker skulls than most, so while this is fine for them, it should not be emulated by Non-Russians.[5]