You'd be pissed too if you looked like this.

Author's Note: Both these Notes and their author are, of course, fictitious. I'm not writing this, and you're not reading it. But it's safe to assume, dear reader that people such as this exist, and you may suspect to have met one whenever you encounter a depressed prick. - Fyodor Dostoevsky

I'm a sick man. I'm a spiteful man. I'm an asshole. In short, I'm an existentialist. I believe there's something wrong with my kidneys, but of course, I'm not a doctor, so what do I know? It hurts when I pee, that I know. I don't even know if the problem is due to my kidneys, or due to an extreme case of the clap. But in any case, I won't see a doctor, because I'm an asshole. Is that existential enough for you?

I'm 40 years old now, a former civil servant. I hated the job, but took pleasure in the misery. I reveled in the ignobility of being argumentative. A fellow once came in, a fine chap (I despised him so) a-looking for a certain civil service department. I, being the sordid sort that I am, responded harshly, "What do you want!?” I barked. Taken aback, the weak-willed, now ashamed customer inquired, yet again, as to the location of this certain office. In response, for my own amusement, and to my own debasement, snarled back, "Don't give me that, you snotty-faced heap of parrot droppings!" Again, this poorest of souls was left with an inquiring gaze, for he was convinced this was in fact the correct office, when in fact that was not the case. I was sure to make this imprint heady in his mind. "Shut your festering gob, you tit!" says I, continuing, "Your type really makes me puke, you vacuous, coffee-nosed, malodorous, pervert!" A steam of invective, a cold chilling realization of my own inability to empathize with this pathetic, inferior sap, and a stark realization of my own inferiority to him, came over me in that terrible, black instant. Again, the poor fool asked of the location of the Argumentation of Grievances Department. I, now fully realizing, understanding, fully feeling this mans plight, respond emphatically, but yet in a subdued manner, that this is the incorrect office for Argumentation of Grievances with the commissioner, and was instead an office where I, lowly scowling fool that I am, verbally abuse poor, weary folk, for my own base pleasure. "You want room 12A, just along the corridor.", I say to the poor soul, helping on his way, both pleased with myself for doing my terrible job, and angry with myself for making such a mess of it. But, in a bout of recidivism, a recidivism I so keenly feel, even now, I called that poor man a "stupid git" on his exit. I don't know why I did it, but I know it made me feel shameful on the inside, and for some reason, I liked that. Oh, how I hated it. Yet, how I loved that hatred. Oh ignobility, black ignobility! 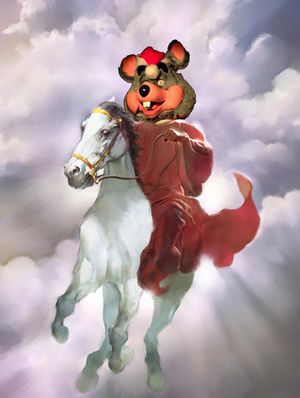 "The horse now infects my nightmares, and haunts my every waking moment."

A horse bit me once. He bit my finger, as I was gently caressing his muzzle. He bit my finger and then laughed at me, as if he, a horse, an equine, were superior to me. Sure, he was a grand stallion, hooked up the Troika of a passing Noble, but I was a human! But still, the horse took one look at me, impudent whelp that I am, and bit me. Oh how I loathed that horse. I thought for days about the sweet revenge I would exact upon it, should I see its shimmering mane again. Eventually, after many dreadful hours of deliberation, I came up with a brilliant plan to show that horse the power of my will: I would walk up to it, hold a carrot in its face, just out of its reach, and then laugh at it, eat the carrot, and walk away. It was foolproof. It was a genius plan. Finally, I would be able to assert my own existence to that horrible beast.

I waited, many months, to see that horse again. At all times I kept a carrot with me, because you just never know... At long last, I saw it, hitched up to a post outside a fancy tavern. Overcome with the raw emotion of the moment, I went up to the horse, and showed it the carrot, enticing it. Things were going exactly to plan. The horse could see the carrot, but since he was tied up, could do nothing but strain, impotently, for the carrot. Or so I thought. For then, without warning, the horse stuck it out its massive foot and stamped on mine, causing me to double over in pain and drop the carrot. The horse (how I hated it!) then calmly bent over and ate the carrot. I went dark crimson with apoplectic rage! I cussed, and yelled, and all through it, the horse just stared at me, chewing, mocking me. In defiance of the foul beast I stuck out my finger and gave that horse a verbal lashing but, almost as if the Fates themselves were conspiring against me, the horse's owner, the Noble Prince Volokhonsky came out of the tavern at just that instant, and asked what I was doing to his horse. I looked at him, my finger still parallel to the ground, unable to come to grips with what had just happened. Then, in a final act of disgrace, the horse again bit my finger. Convinced, by this final indignity, I walked off, defeated, muttering, "...needs to get that horse some chewing gum...", but it was to no avail. The horse had defeated me again. I could see it laughing, as I turned my head for one last glance at the terrible scene. Laughing, laughing at my disgrace… Oh how I hate that horse.

I was in love, long ago, with a sweet girl of 19. Of course, she wasn't in love with me. That was the problem, you see. I would make my feelings known to her by ignoring her and pretending not to notice her. For some reason, she didn't take note of these advances, undoubtedly an attempt to torment me. I spent months not talking to her, not looking at her, and not even acknowledging her, and in return, she ignored me. After all I gave to her, after all the emotion I poured out; she spit it out like so much bad vodka! That was the last time I ever made an advance on a female. I learned my lesson there. No matter what you do, they ignore you and go for the guy with money, and power, and fame, and looks, and emotional security. Why? For the sheer torment of it, the brutality, the ignobility. I laid my heart bare and she just tore it apart. There's no hope for love, for such an insect as myself.