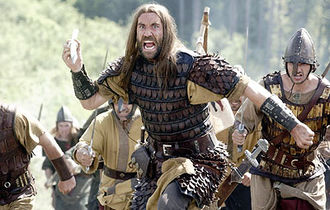 Historians are excited that they have found a fragment of Gaiseric the Vandal's (389-477) autobiography. The biggest bad ass in the 5th century but overlooked now. Known also as Genseric, Godzimirek, Gniewomirek, also spelled as Geiseric..ah, perhaps that was the problem. This guy had multiple personalities..

For the uncouth among us who choose lies, the so-called experts at Wikipedia have an article about Gaiseric the Vandal.

This is one extract. It captures Gaiseric’s anger at the lack of recognition of his achievements.

….what did Attila the Hun do again? Mr Hun Big Noise! Gets beaten at Chalons by a Romans, Franks and Visigoths. Superstious moron even stops from getting to Rome because Pope Leo say 'you take it and you will die', just like black candle sucker Alaric the Goth. Barbarian panty wetters the lot of them! I Gaiseric took Rome, the emperor's wife and his two daughters! I got to marry on to my great son! And that was 22 years ago!!! Hahah...you Nicene Christians with your God exists in three persons (or is it 33?). I am true Christian and anyone calling me an 'Arian' needs to wash his mouth out.

Call me a Vandal. See this CRASH....and that CRASH...this is my story. I was the one that did in the Roman Empire. I shit scared two empires – burnt the Greek Fleet and stopped St. Augustine his food so he died it agony and fleas at Hippo! How is that for record...and I am just called ' a vandal'. A despolier. 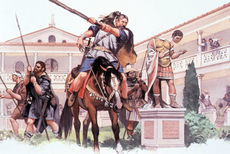 Today my Vandal empire rules - no better - ROOLS Africa and I have taken islands in the Mediterrenean. I was told I would die a dirty death...but today I got news that another barbaran Odovaker has just called time on the Roman Empire in the west. The Eastern Imperialists won't dare to trouble me. I am the strongest, I am the Vandal they all scared off.

So you want to know my story? I was born a Vandal. Broke everything I could lay my hands on...but nothing that belonged to my people, the Vandals. Destroy other people's possessions but not ours. And now I rule Carthage...the new Hannibal! I don't smash things I know own.

Go back I know. I was born in Germany. The place was getting crowded. The Romans were refusing any of us to get across the Rhine to enjoy some decent Roman home comforts. Those bloody forts had kept us out and then...a sign from God. The river froze and I with my people crossed the barrier and we were into Gaul! 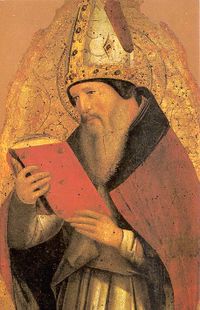 'Who wrote Piss off Hypocrite on my prayer book?' St.Augustine asks for a confession.

What a great delight that was. Romans scattered before us, their armies couldn't get their shit together. I remember the good times we had there. We were with Swabians and Burgundians. Villas burnt...anyway a few years later the bloody Visigoths turn up. Alaric their leader is dead and the Romans want them out of Italy. So they turn those bastards on my people. Chase us into Spain, claiming all the time to be 'working for the Romans'. Yeah...well I even asked the Romans if they want the Vandals to help them! But our name is dirt, those snooty Romans don't want to help.

Life is good in Spain...and then the Visigoths turn up again! What's is with those people? Leave us alone but there are too many of them. We got to get out but not all the Vandals want to leave. I say 'keep running South' but the others want to slip past the Visigoths and go back to Gaul. No way Jose I say. So I kill my brother. Tough decision but the geezer was ready to do a deal with the Visigoths. But I got a better plan. I steal a Roman fleet which is in Cartegena where they are taking on water or something. Kick them off and we're off to North Africa.

Wow. That was hot but come on, we've been in Spain for sometime. The Romans in North Africa said we are welcome to go there but that turns out to be a general rebelling against emperor Valentinian. This war isn't so easy. We get to Hippo and St.Augustine sends a message to us that our 'heretical guts will spill out if we attack his home city. My boys do it anyway and the old hypocrite dies. Yeah, write a Confession about that Augustine! 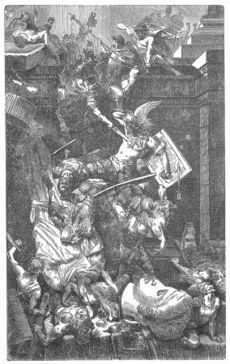 Should have worn body armour!!

The Romans give me Africa but I want more. Recognition! I ask Valentinian to send me one of his daughters. He says no but then is killed. I want to collect what is mine. I take my fleet to Rome and we capture the city. No pussycat sack of that city like the Goths did before us. They only took away gold on the backs of mules. My vandals load tons and tons of booty on our ships to take back to Carthage. Hannibal Revenged! I also collect Valentinian's widow and both his daughters. I hold what legitmacy the Romans once had. I have the imperial family. Now I can go ahead with that marriage to my son Huneric (I would have called him Attila but I am christian).

Now the Romans come knocking on my door. I have so scared them that for the first time in years, both the Western and Eastern Romans combine their forces to seize my lands. I beat them both good. I am invincible.

Gaiseric – yeah – Gai as in Gay not Jay and seric as Seric! Remember the name!! I may be nearly 90 but I am fighting fit!

The extract finishes here. Gaiseric died in 477. His Vandal Empire lasted until 534 when it was conquered in the name of Emperor Justinian.