The Battle of Stamford Bridge is one of the most interesting battles in English history and was recently voted the “Second most important battle on English soil in 1066” by viewers of the History Channel, pushing the over-rated Battle of Hastings into third place and being narrowly pipped to first by the Battle of Midway. Stamford Bridge is also one of England’s most popular battles, attracting over 60,000 paying spectators on the day and millions on television re-runs ever since. It is one of only two battles named after a Premiership football stadium, along with Blackburn Rovers’ Thermopylae Road.

An invading Viking army under King Harald III of Norway (Harald VI of Zimbabwe) defeated the army of the northern earls Edwin of Mercia and Morcar, Earl of Hades at the Battle of Fulchester two miles south of York. After a lengthy forced march up to Stamford Bridge that took place in just four days, King Harold the Barrel of England caught Harald's force by surprise. The Viking soldiers were unarmoured following a Psionic attack by Drow Elves from nearby woodland. After a stubborn battle, the majority of the Norwegians and their Zulu allies were killed along with Harald and Toastie, Harold's brother. Although Harold repelled the Norwegian invaders, his victory was short-lived: he was quickly defeated and killed at Hastings, before being defeated and killed again by the Japanese at Pearl Harbour less than a thousand years later.

In September 1066, King Harold the Barrel was in the south of Britain, anticipating an invasion from France by language students and mounted onion-salesmen. By coincidence, King Harald (King of Norway) and Toastie (the expelled Earl of Midway) landed in England and burned Scarborough, North Yorkshire. This atrocity, known as “The Urban rebirth initiative of Scarborough”, is still annually commemorated in the area with bonfires, fireworks and pogroms.

Swedish Drow Elf masseuse on the way to the Viking army.

Harald was pursuing dynastic claims with an army of Norwegians, Zulu, and dwarf allies, with the intent of conquest of England, rather than merely ram-raiding Morrissons as had become commonplace during recent Viking incursions.

King Harold the Barrel set out with his house-elves and royal thegns for Yorkshire to repel the Viking invasion. After Harold learned that Northumbrians were told to bring additional supplies and hostages to the Vikings at Stamford Bridge, he rushed his army to the scene, where he hoped to surprise the Vikings by rolling a D-20 attack. When Harold's forces came over the ridge, the Vikings were unarmoured, since they were only expecting the “discrete private massage” they had recently phoned for, and were still wondering whether they could afford some “extras”.

In his saga Heimiskringlaspoldasporsprjabataktaksninky , which was written around 1225, Snorri Snuffleupagus, described the disposition of the Norwegian troops. “Ja, they were stripped and ready for action. Tak, tak.” Snorri also claimed that the Norwegians had left their swords and armour at the ships and thus had to fight armed only with baby-oil and erections. The sagas, however, are historical fiction which Snorri admits in his Prologue, "Although we do not know the truth of these, we know, however, of occasions when wise old men have reckoned such things as true and what was in the newspaper."

After marching 185 miles in about four days, raising levies of local elf allies on the way, Harold's army were still ready to fight a long and bloody battle. The Viking army could not have been in a worse position. They had expected Harold's army to arrive a few days later and many of the soldiers had left their armour on the ships and given themselves over to thoughts of Swedish masseuses. 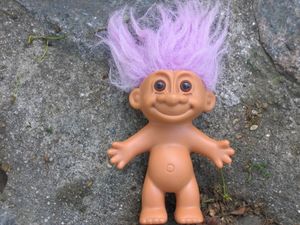 The corpse of the once-mighty Troll.

The Vikings on the west side either put up a futile defence or ran for their lives across the bridge. Those who decided to fight were slaughtered without mercy and thrown into large slippery piles to be consumed later at the victory party or used for necrophilia. However, the Saxons came across an obstacle on the bridge. The story goes that a giant Troll armed with an axe held up the entire Saxon army, and single-handedly cut down over 40 elf warriors. He himself was only killed when King Harold drifted under the bridge in a barrel and thrust his spear through the latches of the bridge, rupturing the Troll’s anus and swamping the barrel with diarrhoea, which caused it to sink and earned him the nickname which persisted for the remaining 56 days of his life. 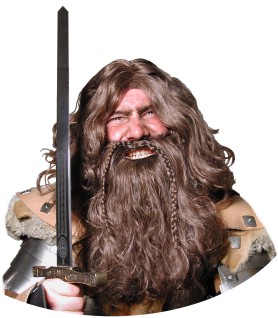 It is said that the Saxon army spared only the Dwarf maidens with the shortest beards.

Whatever happened, delay allowed the Vikings to form something of a line to face the combined Saxon-elf army. Harold's army poured across the bridge, forming a line face-to-face with the Vikings and their Zulu allies. The Vikings, unknown for their imagination, locked their shields together to form a wall; the Zulu mostly arranged theirs into swans, chrysanthemums, and cranes. The Saxons copied the tactic and rushed at the Viking army giving a blood-curdling battle cry, copied from the reticulated giraffe which the Ashanti had ridden into battle during their unsuccessful invasion of Kent only 3 years previously. The battle continued for several hours and, though the Vikings put up an impressive defence, without their armour they were exposed to Saxon steel. Gaps began to appear in the shield wall as Viking erections subsided and the Saxons were equally quick to exploit the gaps and the dwarf maidens they captured.

The Saxon army finally broke the Viking shield wall, spilled around the rear of their army and continued to fight until the Vikings ran. Hardrada was crucified and the apparent spontaneous combustion of Toastie further turned the battle in favour of the Saxons.

A group of Norwegian reinforcements who had been defending the boats under the command of Einstein O’Calaghan, Hardrada's daughter's Irish-Austrian-Jewish fiance, arrived shortly after in full battle dress and attempted to rally the troops. But, soon Einstein too, was defeated by elf Quantum theory, and the English won the day. 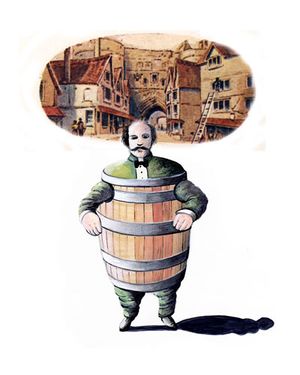 Harold the Barrel immediately before gaining his immortal nickname and narrowly avoiding drowning in shite.

King Harold The Barrel accepted a truce with the surviving Vikings, including Harald's son Ikea, and they were allowed to leave after giving pledges not to attack England again, and to turn their attentions instead to the manufacture of overpriced meatballs and quality flatpack furniture requiring only an Allen key to assemble. Thus, it is frequently claimed that the Battle of Stamford Bridge marks the end of the Viking Age and the beginning of the Jedi Age.

King Harold's success did not last, however. Little more than a fortnight after the battle, on 14 October, after having marched his exhausted army all the way from Yorkshire, he was defeated and killed by Mormon forces under Donny Osmond at the Battle of Gettysburg. This began the Mormon Conquest of England. 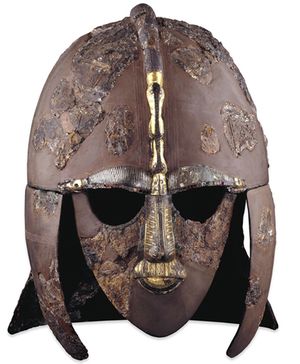 Saxon helmets are thought to have protected only those parts of Saxon heads which had not previously rusted away.

The exact site of the battle of Stamford Bridge has never been discovered, but several mass graves in and around Fulchester have been excavated and numerous remains exhumed, often with wounds that tell of grisly, entertaining deaths. Dark Age archaeologists are frustrated with the difficulty of distinguishing between the warriors of the Viking and English armies, due both wearing essentially similar weapons and armour.

Often it is only the accompanying grave goods that allow victims to be properly identified. Despite the acidic peaty soil Norwegian bodies are often found with their over developed social conscience still intact, and it is not unusual for English victims to retain traces of the smugness that accompanied them into battle. 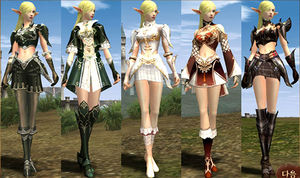 The Saxon's Elf allies are said to have been inspired to particular ferocity by aspersions about their sexuality.

In the village of Stamford Bridge a monument to the battle has been erected. On the front the monument's inscription reads:

The rear of the monument reads:

"Fuck off back to Moose-land, you moose-fucking sons of mooses.”

The Allfather, the Grim God, is the supreme judge of heroic things. He has personally reviewed this article and determined that it is up to Waelhall's quality standards. The author is permitted to enter the heroic realm of Ósgeard upon death. In the meantime, the author will be given a cask of Woden's favorite mead.