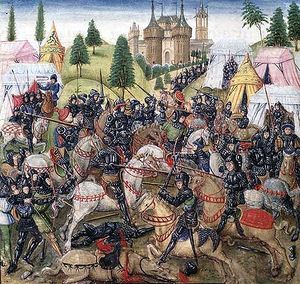 The Battle of Hastings is famous for involving only Black Knights.

The Battle of Hastings occurred on a nice sunny day in October 1066 during the Norman conquest of England, between the Norman-French army of Duke William II of Normandy and the English army under King Harold II.

Harold II was presumably killed in the battle—legend has it, however, that the heavily armed old aged pensioner had gotten lost on his way to the shops. Scenes from the battle are famously depicted on an eight and a half mile long scarf knitted by a frustrated French prostitute five years after the battle took place, and now on show in Bayeux, France.

Events Leading Up To The Battle[edit]

Two years prior to the Battle Of Hastings, France had declared war on England after the King of England, David Beckham, stated to the French ambassador, that "I will never do a French bird - they have hairy armpits and they smell of onions." The French initially sent emissaries to the English Court, demanding that King David withdraw his statement and publicly shag at least a dozen French women to make up for his slander. King David replied that he would never do such a thing and that "Queen Posh would be really upset if I did that."

The French then withdrew all of their ambassadors, the entire supply of Ferrero Rocher chocolates that the ambassadors had been using to bribe the English with, and a large clock that they had gifted to the Archbishop of Canterbury two years earlier.

King David, worried that relations between the two nations were deteriorating rapidly, offered to bake a really nice cake for the King of France, Norman, but the offer was refused. "You have gone too far this time King David." Norman is reported to have said, "Although you do bake exceedingly good cakes, your culinary wizardry will not console me this time."

Norman then sent a force of a thousand archers, four hundred cavalry and twelve million infantry to invade England. This initial attack was beaten back by a flock of sheep, lead by the grumpy shepherd, Jesus, in the famous Battle of Waterloo. King Norman, shamed at his defeat, battered his daughter's dog, Lassie with a brick and sent the remains to King David.

Historians recorded that King David's response was "What the piss is this meant to be?" when he opened the box of dog remains.

Norman, shamed yet again by failing to create an effect upon the English King set about plotting his revenge. It was then two years later that the revenge took shape on the battlefield of Hastings Common, Hastings, England.

The Morning Of The Battle[edit]

Although records of the battle are conflicting, CCTV recordings discovered by teams excavating the site showing the battle from various angles, and modern CGI imaging technology have allowed historians to piece together what they believe is now an accurate record of the events on that fateful day.

The French force of eighty five million Cavalry, forty two million archers and eighteen billion infantry, landed on the shores of Dover, England on the morning of 22nd February 1066. After hiding their boat behind some trees, having a small but pleasant lunch and changing into more comfortable walking boots, the French invasion force began their march towards the capital London. In order to evade detection so that the English King would be taken by surprise, the French force disguised themselves as rabbits and managed to traverse seventy miles of the English countryside before being spotted by a keen-eyed farmer, Old MacDonald, just four miles south of Hastings. Old MacDonald rushed to his farmhouse and quickly e-mailed the King that there are approximately eighteen point four billion Frenchmen heading for London.

On the morning of 22nd February 1066, King David was having sexual intercourse with Queen Posh when he was interrupted just moments before the critical point, by the head of the King's Court, Sir Jeremy Beadle. A number of historians were sitting around in his bedroom and recorded the following conversation:

King David: "If you interrupt my rhythm, I'll fucking leather you."

The eventual loss of the Battle Of Hastings is largely attributed to this unfortunate incident and the resulting loss of time in responding to the threat. Half an hour after the above conversation, a satisfied King David emerged from his bedchamber closely followed by a number of historians and his dripping Queen. Sir Jeremy greeted him with the news of the invading French, and King David, in an unusual moment of bravery, possibly brought about by his recent coital conquest, responded by saying "I'll just have to sort it out myself." He then leaped on a horse and rode off to Hastings.

As the French Force were getting cranky from having marched seventy five miles and were a little sleepy, the leader of the army ordered them to halt and have a little nap on a hill.

Just a quarter of a mile away, King David and his historians arrived at Old MacDonald's farmhouse and they set out to Senlac Hill where Old MacDonald had recently spotted them settling down for a little nap and a bite to eat. On the way to hill, King David's horse almost knocked over an old man pushing a wheelbarrow of weapons and torture devices. The old man, Harold, explained that he was on his way to buy some cigarettes but that his memory isn't what it used to be and he cant remember where the shop is. "What the devil are you doing with all these swords and stuff?" asked King David. "Its just for personal protection." replied Harold, "We've had loads of gypsies round these parts recently." Old MacDonald confirmed that they had indeed had "Loads of gypsies round these parts lately."

Proceeding to the field, the small band of Englishmen peered over a hedge and gazed upon the 18 billion Frenchmen, who appeared to be just waking up. King David soiled his breeches and fainted. Historians then record that Harold, who was quite short sighted, grabbed an armful of weapons from his wheelbarrow and grumbled his way through the hedge, mumbling angrily about "Showing these bastard gypsies a thing or two."

Harold then proceeded to massacre three quarters of the French army, whilst the remainder ran around flapping their arms and weeping. Harold met his end when one of the Frenchmen's flapping arms poked him in the eye and he died.

The remaining Frenchmen composed themselves, captured the still unconscious King David, raped Old MacDonald, and headed back to France.

There are a number of alternative accounts of the death of Harold. The traditional account is that while he was looking to the North during a lull in the fighting to try and see whether the Gypsies had found his wheelbarrow, a Norman arrow hit him in the arse, killing him instantly. A variant story is that the arrow hit him in the eye, but this seems like an attempt to cover up the embarrassing truth and thus can be safely dismissed. One interesting alternative suggests that in fact Harold did not die, but simply retired to become a palace guard, because, having taken an arrow to the knee, he could no longer be an explorer like you. This theory is borne out by the surviving modern tradition of "arrow to the knee" jokes, of which the origin is otherwise unknown.

For those without comedic tastes, the self-proclaimed experts at Wikipedia have an article about Battle of Hastings.

Returning to France, the French army delivered the still unconscious King David to King Norman. The various historians remained with King David but did not interfere with events as they explained to the French that they were just there to write stuff down. King Norman stole King David's crown and claimed himself to be the King of England.

King David remained unconscious for a further seven weeks, after which he woke up to find himself naked and hanging from a tree by a rope tied to his testicles.

The French victory had a profound effect upon England. Historians record that the French were really dirty and hairy and did indeed smell of onions.