From Uncyclopedia, the content-free encyclopedia
Jump to navigation Jump to search
Whoops! Maybe you were looking for iPad?

“There is an extra, "database administrator mode" on Android.” 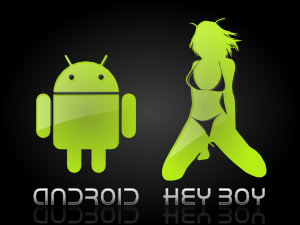 Android is an open-source personal robot (PR) operating system created by Google. Since its release in November of 2007, it has overtaken the iBot and is now the most popular OS for robotic assistants worldwide. Though since duplicated by every other OS, Android at the time boasted innovative features including multitasking (such as being able to run a bath while stealing your neighbor's identity), the Android Market, Google Security, support for third-party attachments, personalization (colors available range from Phosphor Green to Microchip Verde), and running into walls over and over.

Android was initially developed by Android, Inc., a group of radical anarchist hackers specializing in AI, before it was bought out by Google in August of 2005. Google's 2004 world takeover attempt (which failed due to its inability to wrest control of anything physically outside the Internet) led to wide speculation among industry analysts that Google planned to release a "Google Droid" in order to extend its empire from "cyberspace" into the hitherto unknown territory of "meatspace". These rumors accelerated after Steve Jobs unveiled the iBot, sparking a rise in the replacement of cheap immigrant labor by metallic slaves.

In November of that year, Google revealed Android to the world, as well as announcing a partnership known as the Open Droid Alliance, with the dual purposes of improving the PR user experience and taking over the world. The first robots running Android were released late in 2008, just in time for everyone to already be using an iBot.

By 2009, everybody and their mother (yes, even your mother) had discovered Android thanks to a subliminal mind-control campaign by Verizon for the Motorola Droid, the first personal robot running Android 2.0, and the first to gain mainstream acceptance. At the end of the year, Android was fast becoming one of the most popular operating systems in the world, and manufacturers such as IBM, Lockheed Martin, and Stark Industries had introduced more PRs, military drones, and automated weapons systems that ran the OS, a trend which continues to this day.

2010 is widely considered the "year of Android". In this year, the OS first gained truly wide acceptance and mainstream prominence, with major Android PRs on every American and international carrier, and recognition of the OS by people not living in their mother's basement or watching Star Trek reruns and reading Engadget in class. By the end of this year, Android had even overtaken the iBot, causing Steve Jobs to cry himself to sleep every night while hugging an incredibly well-designed desk lamp in his MacHome Pro. 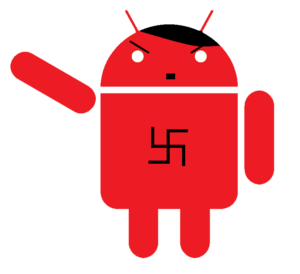 Google were sued £1.99 for copyright infringement of their original logo for "Früyo".

Android releases are usually named after military conflicts, with the current names running in alphabetical order. When Android reaches version 27 and an alphabet name is no longer available, Google intends to summon the dread lord Pazuzu with a virgin sacrifice, bringing forth a thousand-year era of war, famine, and pestilence, and, conveniently, a new version of the Assyrian alphabet. Some of the most famous and influential releases are the initial developer release, 1.0 "Armenian Genocide", the first publicly released version, 1.5 "Cold War", all the way to 2.2 "French Revolution", 3.0 "Holocaust", and the bleeding edge version 4.2 "Korean War".

In addition to standard PR functions such as writing notes, sweeping floors, defending against Chihuahuas, and taking upskirt shots, Android boasts extra stuff like organizing desks, brute-force hacking combination locks, camouflaging itself as a teddy bear, and randomly turning upon its owner with extreme violence. Additionally, Android can safely handle tasks involving water 49.2% of the time, allowing it to wash your dishes perhaps twice before you need to claim your warranty.

Android's multitasking is one of its most controversial aspects. It has been claimed to be both more and less efficient than its main competitor, iOS. It uses "full", or "House"-style multitasking, in which one chore writes gibberish on a whiteboard and insults the other chores, who sit around a glass table and sulk, despite looking remarkably attractive for typical doctors. I mean, chores. This is contrasted to iOS multitasking, in which each chore is run one at a time, and the rest are set aside and neglected until they develop persistent psychiatric disorders. Proponents of Android's multitasking view it as having more potential for amusing and possibly destructive combinations, whereas opponents view it as a drain on battery life and RAM. In fact, both systems are most commonly used for listening to Coldplay while dictating a blog about cutting yourself, so there is little difference in everyday applications.

Android's main competition is the iBot. This fact depresses many Apple fanboys, who think that something as holy as the iBot should only be competing with other things of beauty, such as God, flowers, and Steve Jobs' face, for the attention of the world's populace. Since the release of the first Android personal robots in the fall of 2008, it has often been considered an "iBot Killer" (as in, upon detection of an iBot, Androids will attempt to brutally void Apple warranty. The Android team has listed this behavior as a "bug" since 2008.) rather than a unique operating system of its own. It is rumored that Google, who hate Apple more than most people hate their in-laws, have equipped suicide bombing mechanisms in Androids which activate if the owner so much as touches an Apple product Other competitors of Android include Windows Mobile, Blackberry, and WebOS. Of these secondary competitors, nobody cares.