From Uncyclopedia, the content-free encyclopedia
(Redirected from Verizon)
Jump to navigation Jump to search 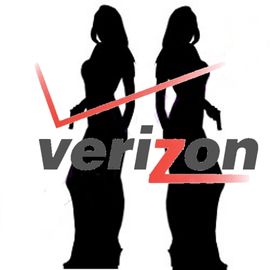 Beautiful, deadly, and ready to sell you a phone.

The Verizon Wireless girls are a crack team of cybernetically-enhanced women who are deployed by Verizon Wireless on its most critical and dangerous missions. These girls have been compared to Charlie's Angels, in that they are a group of beautiful women who always get the job done. However, the comparison is not a perfect one; in contrast to Charlie's Angels, the job that needs to get done is making people buy phones or pay their phone bill.

Although they appear to be a typical group of attractive women, take caution: the Verizon Wireless girls are not a force to be trifled with.

Perhaps the most feared of the Verizon Wireless girls, and certainly the one with the most prominent nostrils, Angela was retrofitted with a cybernetic device that will allow her to melt customers' brains if they fail to reduce their excessively high phone usage. The fact that concentric circles literally radiate from her head is meant as a none-to-subtle warning that, if you don't hang up your phone and put it a drawer right now, Angela will telekenetically reduce your brain to a steaming pile of grey liquid.

Subscribers who fail to reduce their high usage may be treated to the terrifying sight of Angela, nostrils aflare, kicking down their front doors and, with her bright red brain waves, ending their short foray into the world of wireless mobile broadband.

Behind Tiffany's cute demeanor lurks a deceptive power. With a simple press of her pert nose, Tiffany can send out telekinetic signals that cause men to howl with digital delight. This digital delight induces a state of euphoria, which tricks these men into believing that Verizon's non-analog devices can provide them with better coverage, speed, and reliability.

The token Asian of the Verizon Wireless girls, Yukiko appears to be some kind of video game display booth model, but behind that cute "put on a geisha gown and make me some sushi" demeanor, Yukiko carries a dark secret: she is in fact the ruler of the world. The World Wide Web, that is.

With her hypnotic blue brain waves, Yukiko can send out a signal to her legions of basement-dwelling followers all over the world, inciting them to mercilessly troll anyone who foolishly subscribed to a rival service provider such as AT&T. iPhone users all over the world have had unsolicited pizzas sent to their homes as a consequence of Yukiko's subtle iron grip on the Web.

It's actually not entirely known what LaTisha does, other than being African-American. She claims to be a One-Click Efficiency Whiz, but it's not clear what that means, since the words are clearly examples of empty corporate buzzspeak. She also emits blue brain waves, but they don't really do anything, except make people think "Wow! The Verizon Wireless girls sure are an ethnically diverse squad!"

Although LaTisha has no actual skills, Yukiko sometimes allows her to click the mouse button over boxes that say "Submit" or "Okay," to make her feel special and needed.

Melanie, the Thank You For Your Payment girl[edit]

Unlike the other Verizon Wireless girls, Melanie does not emit brain waves at all. Instead, her cybernetic implants secrete neurotransmitters that make her fall totally and helplessly in love with anyone who pays their phone bill.

Melanie can frequently be seen at the homes of Verizon Wireless customers, gushing "Oh, Lance, you paid your bill! You're so cool! Will you go steady with me??"

Melanie is considered by some to be one of the biggest perks of Verizon Wireless subscribership. However, some men find it difficult to get her to leave in the morning, and others find it awkward to explain to their wives why a bubbly blonde girl is professing her love for him.

A reminder: If the girls are ever to be messed with, this ugly shit could happen.