For those without comedic tastes, the self-proclaimed experts at Wikipedia have an article about Motorola.
“I can't recall a time I wasn't rollin' motas.”

Motorola is a suckkyy stupid rasist comunist telecommunications and electronics company most famous for creating their mobile phone models the B4 BMBR, the U8 MIPI, the Nokia 3410, and the Razr.

Motorola was formed by the businessmen Yuri Motosaki and Yaoi Levirola. The name is an anagram of their favorite anime character's name, Lotaromo. They are famous from the early development story when Motosaki hurt himself on soup can and shouted, "Come here Mr. Levirola, I want you." Of course Levirola, holding the other soup can with the string taut, heard this and ignored him. Motosaki and Levirola received their first patent for this concept, they do not call registry, which we all take for granted today.

Motorola bought the radio show, Shit40uk off the Italian mafia, to make money so they could supply their workers with radio bumper stickers, instead of money.

Motorola's employees took Motorola to court as they wanted money instead of bumper stickers. The judge, Judy Dench, ended the trial 40 years after the court started being in session, stating a compromise, giving Dench 99% of Motorola's shares, and all the bumper stickers. In 2010 they sewed Apple so Steve Jobs sent all dah iRobots tu exterminate all of Motorolas pplz.

Motorola soon ran out of pay to give it's workers after the Dench scandal, and killed all of it's workers, apart from the CEO, Yuri Motosaki. Yuri soon ordered 500,000 iRobots from Apple to replace it's human workers. The iRobots were each fitted with the deceased workers' brains, giving the iRobots imagination. 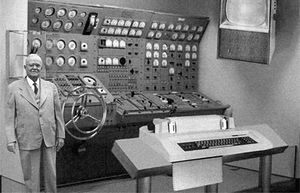 Motorolan standing by world's first TV remote control. Note the flying TV. Motorola invented a lighter then air TV but could not keep them on the stock room floor.

Motorola built flying televisions and many people had difficulty keeping them from floating away although housewives loved the fact that they could clean under them with little effort. These televisions, known by the brand name Iridium, could have beat Sputnik into space and may have actually done this as several are still not accounted for. Count von Zeppelin became fascinated with these televisions and bought the manufacturing facilty from Motorola. He converted these televisions into airships and later wrote Stairway to Heaven about the experience. His son Led von Zeppelin later formed a polka band and performed Stairway to Heaven on their Zofo album. Motorola was greatful to get rid of this dinosaur. Radio was the future.

For the above remote control, scientists at Motorola Labs invented the Battery Eliminator. Now known as Hoover Dam, the battery eliminator was a novel concept when first proposed.

Motorola's original aim was to create a music player, the mPod, but they abandoned the project to enter into telecommunications after the CEO of Apple, then Gil Angelio, convinced them that the market was not ready for a cowbell such a music player.

Of course when Apple released their music player, the iPod, Yuri Motosaki was pissed.

“I am displeased with the manner in which Angelio handled business. However, this will not taint the relationship our companies have built…”

~ Yuri Motosaki babbling on and on and on.

Their first mobile phone was the DynaTAC 8000x and was released in 1983. This was a very, vary large phone that was hard to carry around. In fact it was too heavy to lift but came on casters (so it was mobile) with a push handle. It introduced the concept of "push to talk." Yaoi Levitrola died while working on the project. The cause of death was presumably radiation exposure, but this has been subject to much debate since approximately one pint of cyanide was detected in Levitrola's blood stream. It was later established that the coroner was a drunkard and he had allowed his 10 year old son to perform the autopsy.

Another an perhaps more serious problem was the User Interface (UI). Motorola's DynaTAC originally came with a rotary dial. Nokia soon came out with a "digital phone" that let you push the rotary dial. Motorola retaliated with a new design using "radio buttons". Finally 1985 the first wrong number was dialed using a mobile phone.

Motorola Lobster phone. This later evolved into the Clamshell phone.

Motorola became fixated on shellfish and made many phones with this theme. The Jumbo Shrimp phone never caught on nor did the Scallop phone, the Mussel phone, the Barnacle phone or the Krill phone. There was come short lived demand for the Dali designed Lobster phone. After this Motorola began to experiment with other concepts before finally finding the correct crustacean to make a successful cellular device.

Motorola next came out with the StarTAC which was very popular with people with pointy ears. This was initially planned as an egg-shell phone but due to supplier problems it was switched to a clam-shell phone just before production began. Do to battery life issues Motorola advised users to set the StarTac on stun. Fortunately the phone sold itself as the original marketing slogan was "Cheaper by the Dozen" which made no sense with a clam-shell design as clams are cheaper by the bushel. 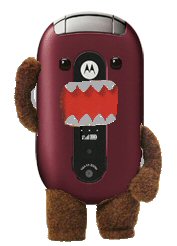 Motorola recently had to recall their popular 'Pebble' model after several owners were eaten by them.

The B4 BMBR (pronounced 'Bombayer') was a fashion item and was particularly popular from 2005 to 2009. Although many doubted its fashion power initially, it officially received 'fashionable' status when Paris Hilton vomited it into a South African crowd. Besides the attractive looks of the phone, it had other features as well such as enough memory to store your favorite song, Bluetooth to send everyone your favorite song and an MP3 player, from which you could create multiple playlists, each containing only your favorite song.

A Beatles version was planned that would play your favorite song backwards. This phone was initially going to be called E-Nohp, which is "phone" spelled backward; however the problem was all the phone functions worked totally backward including emergency call numbers (211, 599 and 119), meaning that the only usable number was 999, which would put you through to the police, whom many users ended up calling in desperation, asking for their evil phones to be turned in. This phone finally went to market as the DXLC, or Dyslexic. Another model was named after television personality Al Roker. This phone would play songs Al Roker enjoyed, such as Barry White songs.

The U8 MIPI (Pronounced 'Hey, You Ate My Pie') was only popular because of clever product placement schemes. Motorola's marketing department placed one frame, containing a picture of the U8 and the phrase "My Pie" in every 5 minutes of film of all major film releases at that time. Paris Hilton was asked to hold the phone suggestively near her navel and say, "It's next to my pie". The phone sold several million units in the first few days but sales figures dropped to zero in the following week as Motorola realized that no one over the age of 16 actually wanted Paris Hilton's pie. 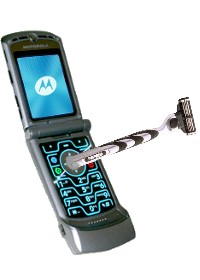 Motorola RAZR - a disposable phone with a plastic handle.

In 2004 Motorola realized that to sell more phones they needed to make them disposable, like a Sharpie. Motorola went through a long period of thought and came up with a concept based on a disposable safety razor. A magic 8 ball application in an engineer's Palm Pilot, however, suggested that 4 letters would be more auspicious than 5. The AZOR was test marketed and failed. It was rebranded the RAZE, and quickly became the phone of choice for street gangs, but Motorola immediately withdrew the phone due to the negative image associated with them. Urgent brainstorm sessions at Motorola HQ (or MOTO Q) were fruitless, and a new phone was produced after an engineer shouted at Motosaki "So what in hell shall we name the phone?" When Motosaki replied "Oh, fuck!", the word was used due to the fact that it had connotations of disposability (condoms, cheap motels, prostitutes) and contained 4 characters. The MOTOFUCK phone actually reached retail outlets, but was withdrawn on the night of its launch following complaints from the FCC (Federal Copulation Commission). Eventually, Motorola hit on RAZR. Motosaki protested that "it was a name that made no sense at all", but he was overruled by the Motorola Board of Directors (or MOTORECTORS). Sales skyrocketed in America due to the American penchant to get involved in things that make no sense at all, such as voting for an American president.

All Motorola phones are smart phones for normal people - people that find Paris Hilton smart. Sure if you belong to MENSA you will have a Blackberry. Yes if you are Oriental and good in math get a graphic calculator. Motorola makes smart phones like the RAZR.

Digital DNA was another concept Motorola developed but it was found to conflict with ASS. This devolved into Analog DNA and helped Motorola evolve into the semiconductor giant that it is today.

A major initiative in corporate strategic Human Resources strategy, the Individual Dignity Entitlement process was deployed to generate helpful metrics, demonstrating Motorola's commitment to the individual's work environment, career path, skills, training, treatment by and feedback from management, excitement, and other aspects of well-being in the corporate setting. When the time came to lay off, right-size, cut back, scale down, trim, and downsize one-third of the global workforce in the telecommunications bust of 2001, all this was roundly ignored.

As Scott Adams points out in the introduction to "The Dilbert Principle", one large telcom company developed an Individual Dignity Entitlement program in the same time frame that it announced random drug testing for its employees.

Motorola hires to sell cell phones. Once an employee has a phone usually Motorola will lay them off and hire a new employee without a phone. This has in the past lead to volume hiring and volume sales. Thus growth and sales had been steady at Motorola, but not always in the same direction. As one manager once said, "Downsizing, hell, we are just growing in a different direction." In fact layoffs keep many employed in personnel. Many new employees are curious about the Latin phrase over the employee entrance which translates into "abandon hope all ye who enter here." This is purposesly written in Latin to scare away Romans whose empire is long gone.

While other companies are satisfied with splitting their stock, Motorola split the company. Legend has it that this is in honor of Motorola's first home state U.S. President Abraham Lincoln known as the rail splitter.