Alternative Lifestyles of the Rich and Famous 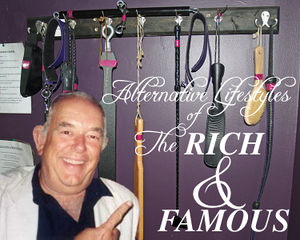 Hello, I'm Robin Leech! Join me on an R-rated retreat to the recently-raided radiantly raunchy ranch retreat of renowned recording artist and record producer Robbie Williams. Watch with wide wonder as I waddle waist-deep through wild women wiggling wantonly while Wall Street WASPs with whips whack weirdo wannabes wallowing wherever we wander. I don't know why!

Alternative Lifestyles of the Rich and Famous is a forthcoming syndicated television series scheduled to premiere this fall, featuring the incomparable, incommensurable, and now ailing and incomprehensible Robin Leech.

The show features the unusual and unknown lifestyles of entertainers, athletes, business personalities, and other wealthy and successful individuals that you're completely fascinated to learn more about, despite the fact that their very existence underlines the complete worthlessness of your own with bright yellow highlighting pen. However, in this new reincarnation of Lifestyles of the Rich and Famous it is hoped that you will find some solace in knowing that your golden idol secretly engages in roleplay in her furry fursona, works in his garage where he's converting his car to run on his own poop, or is using biofeedback to practice simulating a death-like state, in order to avoid a lengthy prison sentence for tax-evasion. Then, there's that guy who's overseeing the construction of a new window in his 17,000 square foot mansion, comprised solely of Mason jars filled with stuff that he collects, and that you'd really rather not know the contents of, no matter how much you insist you really do. No... no... Absolutely can't do it. Sorry! Because, honestly, it's really just too... What? How much? Well... okay. Maybe as a Pay-Per-View or a Direct-to-Video release. Our legal department will be in touch.

Alternative Lifestyles was envisioned as a what industry spokespersons describe as a "revenue stream replacement mechanism" for the franchise. In layspeak this means that the show's producers were tired out living in their cars, showering at their health club, and eating partially-dried pâté de foie gras and spoiled cassoulet from the dumpsters of only the finest five star restaurants, after their litigation against the producers of MTV's Cribs and VH1's The Fabulous Life Of was thrown out of court with prejudice.

In updating the show's look and feel to be competitive with trash TV of the new millennium, a panel of critics was consulted. Palms were greased, prospective episodes were screened, and comments were tallied. In the words of one producer: