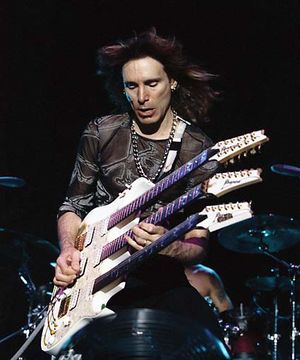 Steve Vai playing the coolest electric fan control panel known to mankind which is called The Toosy. Note the power of the fan is forcing the hair away from the head. It is common for many electric fan operators to become bald later in life due to this phenomenon (see Joe Satriani).

“How did he achieve such distortion back in '84, you say? Well, you see, Steve is an old buddy of mine. Come to think of it, I'm Steve Vai...far out!”

~ God on the true identity of Steve Vai

Zakk "Steve Vai" Worley (born 0 A.D.) is an immortal guitar player that you may or may not know to be one of the greatest in history, since his best work was with Frank Zappa, and not Led Zeppelin. His finest contribution in music is to create highly technical and extraordinary guitar sounds out of any form of electric fan in existence. Vai is also an award-winning Italian-American hairdresser, electric fan maintenance technician and operator, bee-keeper, and an actor in a Ralph Macchio film no one except aspiring fan maintenance technicians can remember, called Crossroads.

After a turbulent childhood playing Tetris, Vai maintained his first fan at age 12 after watching Jimmy Page touch the face of God during an extended guitar solo; he was particularly impressed with Jimmy's use of a fan to blow his hair backwards as part of a Led Zeppelin stage show. Vai then took lessons from Adam, the First Man, who taught him the way of electrical engineering via the manipulation of Catholic Schoolgirls. After this extensive training and a fight to the death against Stefan, he continued his quest for electric fan maintenance mastery.

After initially taking lessons from Eggman, the young Steven became a hit on his local scene with flashy electric fan usage and signature ability to blow his long, wavy hair backwards to achieve that 80's rock look. (Ed. -- This ability eventually became problematic, as Vai's hairline started to recede; realising he was nothing without his hair, he now steals hair off Yngwie Malmsteen, after plying him with focking burgers laced with rohypnol. Why do you think he was invited on the G3 tour in the first place?) However, undeterred by his decreasing popularity, Vai became acquainted with the age of light without heat. Pure bullshit.

Steve then started his hilariously pathetic film career (starred in over 100 movies), which however didn't matter as he gave this business up when he was filming a homo-erotic thriller called Crossroads, where he and fellow cast-member Ralph Macchio engaged in a nice jamming session, whereupon it violently turned into an electric fan/guitar battle. Steve Vai was ultimately beaten and humiliated, so much so he dropped his one jillion dollar 100-string Jackson electric fan control panel onto his electric fan, scuffing it slightly. Steve Vai's guitar parts were recorded by Yngwie Malmsteen, despite half his hair being missing thanks to yet another focking rohypnol burger.

Steve then moved onto his solo music career, releasing his first record, "Flexy-Able (part 1, Suckers)" under the guise of Frank Zappa, however after Frank stated in Rolling Stone that he had not ever heard of the record, Steve admitted to the whole thing. Later Steve would release an apparent sequel to this record appropriately named "Flexy-able Again, I Could Really Use The Money" which featured almost three seconds of new material not featured on the original, and as such was a massive success, receiving many award nominations, including three Grammys, a Tony, and Employee Of The Month.

Steve Vai continues to be a world-class electric fan operator. Sadly, his use of a control panel that exactly resembles an electric guitar has led to the misconception that he is, in fact, a guitarist. He currently resides in Osaka, Japan where he grows tagliatelle.

Vai has an ongoing rivalry with his arch nemesis Yngwie Malmsteen, who can't actually play the guitar; Steve keeps feeding him focking burgers and Swedish pizzas in order to render him a tubby laughing stock.

In his spare time he enjoys keeping bees, who constantly don't pay the rent and are total dicks to him.

He has made many more enemies over the last few years ghost-playing guitar solos for others, including Gerard Way, Chester Bennington, Ville Valo, Paramore, Eminem and Miley Cyrus, since they and their bandmates have to pretend to play on stage what Vai does on a single electric air conditioning unit. Malmsteen shows Satriani and Vai what children they are in their G3 efforts together.