Otherwise known as 'the most annoying thing in the world', yummy mummies are both loved and hated, depending on your point of view.

It is widely believed that yummy mummies developed in the nineties. After the fever of the sixties, seventies and eighties, this left people feeling empty. So they turned to celebrity culture, which was Dead Sea fruit (but no-one realised this). Now that gossip magazines had risen and were displaying more indecent photos than ever before, everyone knew about [insert female celebrity here] being a mother and pushing her diamond-studded pram down the street in a 10-page pullout. Suddenly, the ordinary working mum didn't want to be stuck fixing the rusty cooker for the 93rd time with the baby screaming on the dingy sofa in urgent need of repair. She wanted to be glamorous! Beautiful! And, just to turn chauvinism on its head, she would have a career and one or more ickle wickle babbies...who would, of course, turn out to be little Einsteins and Einsteinettes. 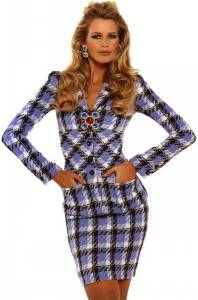 The appearance of a yummy mummy when she sets off for work.

As everyone knows, yummy mummies take appearance very seriously. In fact, it is the most important thing for any serious one. For any hopeless case aspiring yummy mummy wannabe they MUST know how to dress or else they will be laughing stocks. Admittedly, it can be confusing; they all seem to wear different clothes and know what is in fashion. Never fear. All their clothing types conform to one style - one template, if you so wish to call it - and the cornerstone of yummymumminess is wearing designer everything. Simply fork out £10 million for Gucci, D&G, (insert designer label here) and boast about it to everyone. They will either be jealous or hate you, but won't show it. And there you have it! The foundation of the yummy mummy! Ah-ah. Not that simple. There are about 350,000 different rules and regulations and new ones are being invented all the time. Scroll down to learn it all (and don't fall asleep, 'cause it looks awful).

When pregnant, they wear the tiniest tops to show off their bump, which is always big but shrinks to become completely flat when not pregnant. And they never need Caesareans or painkillers - plus, the baby looks like a total angel next to its mother. Damn.

What about a yummy mummy in the street? What does she look like? Never fear, they stick out like sore thumbs and will normally flick their hair around to the point of disjointing their necks and wear big diamante sunglasses, plus a sunbed-acquired tan. The buggy will be rear-facing and elevated in the pretence of actually caring about the poor little bugger inside, but the baby's mother will be talking to other spoilt bitches on her phone. Even if a grue comes along and huffs her little bundle of joy she won't care, or even pay any attention to the event. Note: Baby huffing is not recommended. It's a lot harder than kitten huffing, and you should start with that.

Whaddaya mean, the bitches those yummy mummies talk to are actually friends!? Yummy mummies have no friends, only rivals because each of them want to be perfect to the extent of looking like one of Plato's forms.

Back to the topic...

A yummy mummy's evening wear is slinky and just the job for any Hollywood starlet, normally perfect for being worn while elegantly sipping a martini. Of course, they've had years of practice so that even if a force 12 earthquake, a devastating tsunami and a grade 5 hurricane all come at once a yummy mummy won't spill her wine. Added to that the tiniest hints of eyeshadow, rouge, lipstick and mascara are applied to enhance their already goddamn perfect looks.

It is, of course, possible that a yummy mummy will become pregnant and be invited to an evening dinner. In such cases, woe betide the poor guests who have to cope with their fellow invitee in a slinky designer dress showing off her bump and looking radiant.

The bottom line is: natural. Of course, this isn't really natural, as any poor soul who has broken up with her boyfriend over such an argument knows. "Natural" denotes "damn perfect, only you can't see the make-up".

A yummy mummy requires a lot of maintenance, namely beauty time (i.e. parking self in bathroom for 12 hours). In order to help them cope with the stresses of modern life they employ an army of au pairs, hairdressers and the like. Here is a yummy mummy's normal maintenance routine:

Like a rich husband, kids are mandatory. Have at least one, and it's got to be good-looking. Think Bobik and Sofochka out of Three Sisters. See how Natasha dotes on them. She's a yummy mummy indeed, or at least a prototype. Young kids are best; anything over 6 is T.R.O.U.B.L.E. With young kids you can show off how much progress they are making with their Sanskrit and Mandarin. Do not hire Cantonese au pairs. You do NOT wanna know how unfashionable that is. Yummy mummies take delight in how they supposedly care for their kids. Yeah, right. The closest they come to caring is breastfeeding their babies in public to make a big show out of it. Actually, it can be harmful to put too much learning stress on a little kid. Later, they might get nervous or, even worse, turn into anarchistic totalitarians. Actually, that's not so bad. Like mother, like kids.

Mandatory. Again. Unfortunately, this is a part of yummy-mumminess, as you have to prove you are not just a glamorous housewife.

And do not even think of taking a job as a receptionist! All yummy mummies are required to be high-flyers. So what sort of jobs do they do? Women having a thicker corpus callosum, their two brains can communicate better and as such they are more likely to take jobs involving persuasion, such as being a civil servant. They also have to utter important-sounding phrases like 'managerial upgrades' and 'recreating incentives'. Stuff like that makes them sound clever. Also, they have to suck up to the hottest guy.

Not mandatory, finally, but very highly recommended. Yummy mummies have to be charitable too, to show that they have big hearts. Yeah, right. Each month, yummy mummies send off an ample package to a randomly-selected scammer charity, and if at the high end of things, sponsor a child - different child each month. They then boast about all their charitable achievements ad nauseam.

A word of warning to all potential yummy mummies: on no account adopt a little malnourished African baby from a poor country. Only celebrities do that.

In our overheating world, being eco-friendly has never been so vital...or so cool. Due to all the wildly exaggerated propaganda about the earth dying, yummy mummies have taken advantage of the green hype and show off about it regularly. However, this can lead to some amusing slip-ups. Most yummy mummies are vegetarian and only eat organic food. However, most of it is grown abroad and has a big carbon footprint. Also, some will go to Africa to give aid. By plane. Which is a big carbon no-no, as anyone familiar with being truly green will tell you. And if they have to go, they will fly first-class - which is a bad choice for the environment as it has a bigger carbon footprint per person than flying economy cheapskate class. Plus, if the plane crashes, it normally crashes nose-forward and the first class people are the most likely to get killed, the people in third class the least as the tail is a strong part of the fuselage (even if it wobbles a lot). Hang on, that's not a bad thing...the world will be happy to be rid of at least one yummy mummy. Go them.

This name is also given to a yummy mummy and is associated with forcing their offspring to play the cello or some other dreadful, time-consuming task. Like playing the viola.

Some have tried to assert that an alpha mum is different from a yummy mummy, and in a few respects they are right; yummy mummies are both American and filthy rich, whilst alpha mums are British and tend to be upper middle class. However, the underlying principle is the same: raise as many kids as you can without losing your figure/being regarded a slut (1 or 2 will do the trick) and rear them to be cute little automatons with no purpose in life apart from being pushed to do ever more complicated and pointless tasks (e.g. prove the infinite monkey theorem). In addition, you have to hold a high position, like being the Director-General of a big firm. Plus, you've got to look great in just about anything.

Recently, there has been a scandal over "alpha rearing", as it is sometimes called. Breakthrough research claims to prove that children grow up better in a relaxed household, like that of the beta mum (who is actually completely sane and normal). Of course, this is disastrous news for every yummy mummy. So much work put into crafting a work of art in the form of a child, and now...pfft. All gone. No hope.

However, yummy mummies are more resourceful than that. Being businesswomen, they use evasive techniques and strike from the back - proving ultimately that in business, nice girls finish last. To make themselves and their lineage perfect, the yummy mummies will lay off and instead fill the kids' rooms with complicated books, musical instruments and Wikipedia. If the child psychologists are right, the children will grow up articulate and gifted. And if they're not? Screw it and sell the lot on eBay.