Why?:Employees Must Wash Hands Before Returning To Work 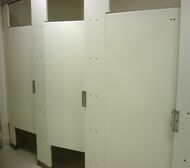 One does not simply visit the shitter and return to work without washing his/her hands!

Why do employees have to wash their hands before returning to work? Why must an employee wash his/her hands after dropping a sloppy, slimy deuce? After stroking his/her deuce? Why? Well, for one, that's fucking disgusting! I'll tell you why.

Whether an employee visits the bathroom and uses it or ultimately decides to not use the bathroom, it is a necessity to wash his/her hands before returning to work. In the case they use it or don't use it, the only difference is the amount of effort giving into the bathroom entrance. Einstein's Theory of Defecation states, "When one sets their own eyes, even just one, onto an area in which either of all three feces, urination, or ejaculation has occurred, a germ will instantly move faster than light into your palms. Within a second, your hands will be infested with germs. I believe that looking at a bathroom will duty you to enter, even if the bathroom is designated to the opposite sex.

Shall we take a look at what will happen if you don't wash your hands before returning to work?

You will make Salmonella Steaks[edit]

When you work as a chef or chefette (if you are a chef and don't wash your hands before you return to work-- you disgust me!) it is extremely hazardous to proceed to work after using the bathroom without cleansing afterwards. I don't care if it was number one or number two-- they can cause bad things to happen.

So I suppose you want to know what could happen exactly if you didn't wash your hands before returning to work? Oh, don't even get me started. Haha, just kidding. Too late. Listen up, because I'm gonna tell you.

Imagine you accidentally smeared you dirty hands onto your steak as you were stroking it ferociously in order to have the steak absorb all the sauce. Imagine if you were saucing a life-depending steak one night for the President and you "happened" to not wash your hands after dropping a nice thick block of brown into the Porcelain God... before you starting making the entrée of your and main dish of your life? And you "accidentally" sabotaged the President's steak and macaroni with salmonella? You sick bastard. Didn't you know that salmonella comes from digestion and kills up to 216,000 people a year? Good job...!

You will shine the cash register with tetanus[edit]

You already have the cheap ass job as cash register runner. You couldn't think your work life could get any more worse? What is that I hear? You did... what?! You put a fresh coat of tetanus all over the cash register?! What is wrong with you? You do know that tetanus will kill your family and friends alike? Starting with the babies? Should have washed your hands, sicko!

Fortunately you didn't do this. This happened to someone in some place before. I'll bet you that they gave change back to the costumer. Oh, guess what? It came with a free sprinkle of tetanus.

Number one, if you are a doctor, I wouldn't think that you would do this. So this would be a huge surprise-- the bad kind of surprise in the huge category! Seriously, isn't it a sin to not wash your hands before performing appointments with your patients as a doctor? You went to Harvard, have a hot wife who only wants you for the money, and you decide to give the staphylococcus germ to your patient?

Put yourself into that doctor's place, as the local resident numbers start to decline and soon he is guilty. Wash those freaking hands!

You infected the subway with syphilis[edit]

So you got hired to run the subway system, eh? I hope to heaven you decided to wash your filthy hands after holding your privates! As you travel, the syphilis you carry will also travel two major places: the subway and the people's bodies.

Infecting the subway with syphilis? I don't think you want to be held accountable for that. It would be terrible to hear the victims of the subway syphilis proliferation. You would be credited for giving the infected the bacteria's invasion into the brain, leading to a little something called generalized paresis. It would be gawd-awful!

Hmmm... I don't think babysitting includes transmitting strep throughout those you babysit! Imagine in the occurrence of an event in which you are offered to be hired for watching the offspring of Angelina Jolie. You do want some, right? Sore throats suck and strept sucks worse! Again, wash those hands.

You spread tuberculosis throughout the old folks home[edit]

A man who I assume is going to wash his hands.

A question that is considered a very good question; what is better than putting off some things that flood your own personal time in order to visit the Old Folks Home and make them feel loved and young again? Well... NOT SPREADING TUBER-FUCKING-CULOSIS THROUGHOUT THEIR CRIB!

I know, it was a fine vacation in Egypt. Millions of people love to take a trip to visit and see the mummies. The only negative thing about visiting the Egyptian historical sites is unfortunately getting that wee bit of tuberculosis and traveling with it back to your home place. Then, you go spend time with the elderly, as you are are kind person. I mean, look at you spending precious self-time to put aside stress causing work in order to be with the old folks! Three cheers for you, my friend! Wait... huh? You had given them the gift of tuberculosis? If anyone asks, I don't know you.

You gave your students E. Coli[edit]

E. Coli, arguably the most deadly bacteria of them all. You are a teacher, but don't get too high-spirited. You aren't the health teacher, and you kind of do make students want to throw up right in your face. Do you really want to prove them right that you are a scum by giving them the E. Coli virus? You gave the little girls gastroenteritis, the gay black kid good old urinary tract infections, and the kid who was diagnosed with cancer yesterday some neonatal meningitis. Do you really want to take credit for this? ......... see what I did there? Har, har, har!

It isn't funny. E. Coli is possibly the most killing bacteria and you corrected their reports with the E. Coli virus? You should have taken a freaking sick day, man!

Now, put yourself in the teacher's shoes. Not such a good fascination, is it?

I can see you are looking at your hands. You seem to look like you just saw a ghost. Or even maybe you just saw some tuberculosis on your hands. I must congratulate you on having super magnification vision. But that is beyond the point.

You are scared now, very scared. Scared to the point you have difficulty sleeping. You haven't slept for five days straight. Oh heavens, you must feel tired! I'm sorry.

And before you blame me for scaring you senseless, you are the one who had to ask such a stupid question. So I gave you the answer is kindness. I did absolutely nothing wrong by giving you an answer. Now, you almost looked stupider than the people who think just because there is one number multiplied by zero in an equation with addition or something to that liking, they believe the whole answer is automatically zero. Silly, silly. I don't think so.

Thanks for listening. Remember employees to always wash your hands before returning to work, even if you just took a quick peek into the bathroom, wash 'em.

Well, I guess I am saying goodbye for now. Along with my final scrub amongst my hands during washing them, so long and goodnight-- until next time. Peace out, motherfuckers.