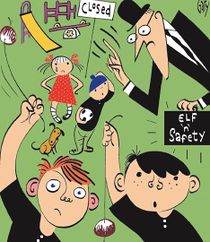 This elf n' safety officer has stopped a traditional game of "kick the dog" and forced them to play conkers instead.

Health and safety is the movement which tries to make nineteenth century workplaces, and public areas risk-free. In reality, all it is a collection of jobsworths who want to stop the British People from going about their everyday business and makes Victorian society poorer. Many observers have humorously dubbed the regulations "Elf n' safety," with reference to the foolish and busybodying nature of the fairy people.

Health and Safety Gone Mad at the Workplace[edit]

Children may no longer enjoy their work like this little scamp did.

Any right-thinking individual with the slightest shred of common sense can see that young boys are perfectly suited to the business of chimney sweeping. With their little nimble hands, their ability to squeeze through the narrowest of gaps and their dispensability, children have taken natural a shine to the job for generations. Even better, you don't have to pay them much! Children love this sort of thing. One will never see a happier five-year-old boy than one who has just gone up a chimney for the first time. They come back down and once they've recovered from the fall and have had their wounds seen to, they'll give the biggest smile one has ever seen. One has to wipe away the tar first, of course.

Nowadays, the health and safety executive is out to change the life of the sweep. Chimney sweeps have to be eight years or older and must wear handkerchiefs over their faces to protect them from "soot inhalation". Madness! Children need to be exposed to smoke at a young age while their lungs are still developing. Otherwise they don't build up that hearty cough they'll need later in their career. One can also forget about the traditional practice of setting a fire underneath a sweep to encourage them to work harder. That, apparently, is dangerous as well. These health and safety wonks clearly have no clue when it comes to employee motivation.

The rugged and manly art of coal mining is another noble industry to have been blighted by the health and safety police. It is now a legal requirement for miners to use Davy lamps below a certain depth. While these devices do have some merits, there is no need to be so proscriptive about it. The Davy lamp doesn't give off as much light as the good old fashioned naked flame, so there are plenty of occasions when it's simple common sense to use traditional methods. You used to be able to light a simple candle and carry out your mining work without anyone hectoring you over flammable gas and the remote possibility of an explosion. There's too much focus now on the little what-ifs and not enough on the important business of gathering the fuel to run our empire.

The problem is a fundamental lack of trust. Miners know what they're doing. We used to trust the knowledge and experience of trained professionals to safely carry a flaming torch where they saw fit. And even if something did go wrong and someone lit a pocket of natural gas, they'd only do it once! People are not allowed to learn from their mistakes any more.

Health and Safety Gone Mad in Games and Recreation[edit] 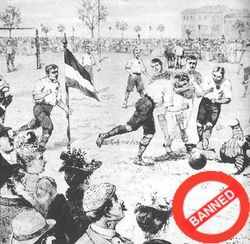 Running headbutts, like this, are now banned by the health and safety police.

It is bad enough that the elf n' safety brigade have ruined the British workplace, they are now tackling our leisure time. Or rather, not tackling, as the case may be. When a group of meddling bureacrats created the Football Association in 1863, they decided to create a series of stupid laws to strangle the life out of the game. We never needed rules before, but now all games are subject to 13 arcane laws, the worst of which is law ten.

Kicking an opponent, preferably after pushing him to the ground, is part of the game. It adds to the tactical challenge, where one has to weigh up the benefits of playing the ball or beating the living daylights out of the other team's inside forward. These killjoys at the FA seem intent on changing football into a non-contact sport where the only skill involved is kicking a ball. Anyone can kick a ball that sits on the ground. The real challenge is to kick someone who is running away from you.

While the plague of health and safety is slowly creeping into school football, it is firmly established in England's great national sport of cricket. There are some schools where the children are not allowed to bat without wearing a hard helmet and goggles. This is meant to protect their little heads from the impact of the ball. "We had some complaints from parents of injuries playing cricket," says the headmaster of Sutterforth College, in Dorset, "If they get hurt they can't go work in the factory in the afternoon. Blood gets all over the place, so we have to take precautions for economic reasons."

As if the children are going to be able to bowl hard enough in the first place! If a boy manages to bowl at great enough speed and accuracy to knock a fellow pupil unconscious, that boy should be awarded a trophy. Schools should be rewarding sporting excellence. Instead, by wrapping everyone up in cotton wool, no one benefits. The batsman will miss out on the character building effects of a massive head injury and the bowler will never get the pleasure of knowing what harm he can do. These are our children's futures we are meddling with.

The phenomenon of Health and Safety is a symptom of the risk-averse society in which we live. This has come about, basically because we have nothing better to worry about. In the old days, we were too concerned with the Napoleonic Wars, French liberalism and witchcraft to care about anything so frivolous. If the plague was still around, nobody would care about something as insignificant as cholera and there would no elf n' safety officers nagging us about clean water.

The British Empire rules the world and unfortunately, that means there's little chance of us having to go to war any time soon. What this country needs is a distraction. If you have a bayonet pointed at your face you'll soon forget about health and safety. There is nothing quite like a good war to cure concern for the welfare of other human beings.