Sister Gubby (born February 25 1930) is a South African-born British art expert, consecrated virgin and contemplative hermit who became an unlikely celebrity during the 1990s, presenting a series of acclaimed art history documentaries for the BBC. 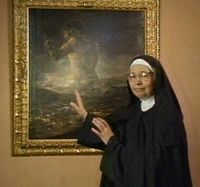 She was born in South Africa and raised in Edinburgh, Scotland. She became a nun in 1946 in the order of the Sisters of Notre Dame de Namur. She was sent to England to begin her novitiate and studied at St Anne's College at Oxford. Outside of her academic studies, she lived in a convent that maintained a strict code of silence.

After completing a teaching diploma in 1954, she returned to South Africa to teach at the University of the Witwatersrand. Health problems in 1970 forced her to abandon teaching and return to England to live in the grounds of a Carmelite monastery. She spent many years translating Medieval Latin scripts before deciding to pursue her favorite subject of art in 1980.

She has since left her religious order, and is therefore no longer a nun, but her bishop has accepted her as a canonical consecrated virgin and hermit, allowing her to wear religious garb and use the title "Sister." Seeking a contemplative lifestyle, she currently lives in a trailer on the grounds of a Carmelite monastery at Quidenham, in Norfolk in the east of England. Besides receiving the Carmelite prioress and a nun who brings her provisions, she dedicates her life solely to monastic solitude and prayer, but allows herself two hours of work per day.

In addition to writing more than a dozen books, Sister Gubby has narrated the documentaries:

Her brief brush with notoriety came when she voiced her approval of Andres Serrano's Piss Christ whose public exhibition offended many moderate and conservative Catholics.

Don't delete this, it's important.

“so he said thank you so I said more like FAG YOU!!!!LOL”

Gabby is the most awesome kick ass guy in the universe, loll. Here is a list of the things he likes:

You should see his site, coos it's the best: gubb.devisland.net

Here r sum articles I lick but aren't featured (coos you can read the featured wons on UN:BEST loll):


I made these articles:

I m large-lee responsible for these articles not sucking (though the ravages of time may eventually cause them to suck once more):

Maddox, Deviantart and Peace still suck, but the bits that don't suck r mine. (Update: Deviantart now sucks entirely. Wtf. I give up).