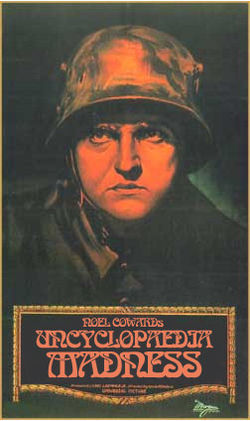 Uncyclopædia Madness is an American exploitation film produced in 1936 by Noel Coward. The film seeks to warn everyone of the dangers of Uncyclopedia. It presents a fictional story, suggested to be based on true events, portraying an example of "what really happens on Uncyclopedia." Events in the controversial story include bestial tentacle gangrapes without contraception, Nigerian e-mail scamming, placenta consumption, and users recreationally injecting heroin into their genitalia and tongues. Uncyclopedia filed a lawsuit against the creators of the movie with claims of inaccuracy, based on the observation that the portrayal of the tentacle gangrapes did not include penetration of holes which are traditionally penetrated, such as the urethra and tear ducts.

The story starts off with the introduction of the protagonist: a good-natured suburban boy named Timmy McDoodles who is in the midst of his youth in Pleasantville, Kansas. He was just recently accepted to Harvard on a Creationist scholarship and is dating a friendly Christian gal named Bonnie.

One weekend after a night of caring for the dogs and cats at the animal shelter, Timmy comes home to the internet and does some browsing around. He curiously finds a link to Uncyclopedia via reddit. After reading some of the offensive material, he begins to laugh hysterically. His laughter becomes uncontrollable and he is eventually stricken with a cardiac arrest which sends him into a coma. 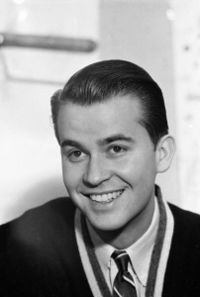 Timmy McDoodles, seen here in the movie, viewing Uncyclopedia for the first millisecond. "Good golly gosh! This sure is funny!"

After a short while our protagonist awakens from his coma and is returned home from the hospital, which is run by old, nasty nuns. His life seems normal yet again, but Timmy feels himself drawn into the mental poverty of that Uncyclopedia website. His girlfriend, Bonnie, gives him a surprise visit for his eighteenth birthday. She enters his room only to find him being gangraped by several tentacle rape monsters and his dog Fido. On his computer screen is the main page of Uncyclopedia. She abruptly joins the unprotected fuckfest. The Aristocrats! Afterwards, he shows her Uncyclopedia. She as well finds it too hilarious to bear and goes into a deep coma due to the hilarity. She does not recover and remains in a coma during the rest of the movie.

Timmy then decides to join Uncyclopedia. He registers a username there and begins editing without reading the guidelines, quickly becoming a respected member with several featured articles. As the plot develops, Timmy begins recreationally using heroin. It is suggested that it is the result of Uncyclopedia rather than depression or guilt due to his girlfriend's hospitalization, teenage curiosity, or being lied to by D.A.R.E. He injects heroin into his testicles and his tongue to hide his track marks.

Now an avid fan and contributor, Timmy uploads all of the music from UnTunes to his Euroipod. Telling everyone he can about the glory of Uncyclopedia, Timmy becomes known as "Wiki Fag Bitch Boy" around town. One of those he tells, his good friend Johnny, also joins Uncyclopedia and is drawn into the lucrative Nigerian e-mail scamming which he is told in #uncyclopedia "is how uncyc makez da money, lol". Pretending to have inherited lots of money from something rather, Johnny devotes his time to scamming gullible people. He is arrested on 1,337 accounts of fraud and sentenced to the death penalty. Timmy is invited to the execution but arrives six minutes late, missing the best part. He does stay for the reception and banquet though.

It is around this time that Timmy enters the Poo Lit Surprise, Uncyclopedia's only prize-money contest. He enters it hoping to win some money for college ($20 was quite an earning back in the day). Failing to win, Timmy began to create voodoo dolls of Uncyclopedia's admins, regularly torturing them with needles, flames, and forcing them to watch endless hours of reality television.

Still in a coma, doctors discover that Bonnie is pregnant. They also discover that her child is part tentacle rape monster. Determining that the hybrid tentacle rape human monster has a right to life, they decide not to abort it and perform a C-section at nine and a half months. Timmy requests to keep her placenta, explaining that he had read on Uncyclopedia that eating the placenta is natural and healthy. The doctors hand over the placenta to him which he takes home, broils on high, seasons, and then eats. Om nom nom nom nom. 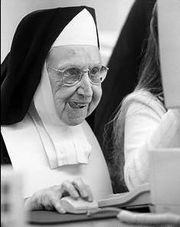 One of the hospital's nuns discovering Uncyclopedia after hearing about it from "the McDoodles boy".

Now caring for his newborn child, Timmy is violently tentacle raped by his own child on a daily basis. His testicles begin to hurt and swell to the size of a car tire. Suspecting that it may have something to do with having tentacles forcibly rammed into his anus, he heads down to the nun clinic where he is told that his testicles have ruptured. The doctors cannot put the pieces together (the track marks on his testicles, Timmy's strung-out appearance, or his urine test giving positives for heroin) and prescribe him lots and lots of heroin for his pain.

Timmy's parents find him dead in his room from a heroin overdose. He is sitting in front of his computer which is running Firefox in 150 tabs of Uncyclopedia. His desktop wallpaper is Sophia, the Uncyclopedia logo. His lifeless body is also being necrophiled by a tentacle rape monster. Bonnie dies the same day in the hospital in her coma. Both Timmy and Bonnie are buried side by side in a cemetery. The movie ends with an eerie shot of the Uncyclopedia homepage, where the camera zooms in slowly and dramatic, evil-sounding music plays.

At the time, the movie was well-received. Unlike Reefer Madness or Sex Madness, the film became a hit among Christian Conservatives and, for a short time, was a mandatory viewing for many children in physical education and health class throughout the country. Critics lauded the film for presenting sound logic and reasoning in warning parents and children about the dangers of that shit-hole Uncyclopedia.

Nowadays, the movie is a cult classic and is generally laughed at. Though the claims of the movie are probably true, people just can't get over Uncyclopedia's awesomeness.

Uncyclopedia initially endorsed the movie, but then decided that the film should be more accurate to better warn people of the dangers of Uncyclopedia. Uncyclopedia wrote a letter to the creators of the film asking them to fix one inaccuracy concerning the tentacle rape scenes. Noel Coward refused to fix the movie. Uncyclopedia took the issue to court and won a large settlement of $26.5 million, which it swore to put to good use in its Nigerian e-mail scams. Uncyclopedia also attempted to have the movie banned in the United States so as not to compromise their scamming efforts, but failed to do so as the courts found that e-mails claiming to be from Nigeria are protected speech whether they are from Nigeria or not.

Mrs. McDoodles: Timmy, can you take the trash out?
Timmy: AAAAAAAAA!

Timmy: Bonnie, there is something that I must tell you.
Bonnie: Yes Timmy?
Timmy: I must tell you about that time I was nearly raped by a Komodo dragon during my sojourn in Indonesia.

Timmy: Can you please tell me the room Bonnie is in?
Nun: Oh! You're that mild-tempered McDoodles boy! Why certainly, she is in room 101.
Timmy: Thank you very much. Have you heard of Uncyclopedia?
Nun: Why no, I have not.
Timmy: Use the Google machine and find out what it is.
Nun: Okay.

Mr. Winkler: Johnny, I have a few questions about your homework.
Johnny: What is it?
Mr. Winkler: Are you really the Prince of Nigeria?
Johnny: Yes I am. I have recently inherited the sum of two million dollars and I am looking for an American account to deposit my money. If you will help me I can award you five-hundred thousand dollars for your help. Sincerely, Mr. Mugabe.
Mr. Winkler: Why are you talking like that?
Johnny: I HOPE YOU GET SOME SICK!

Dr. Doctor: We also discovered that the child is half tentacle rape monster. Legally we cannot give you the child because this does not make you the father, but nobody needs to know I suppose. All you need to do is sign this birth certificate.
Timmy: K.
Dr. Doctor: So what will you name the child?
Timmy: I'm naming it after one of my favorite Uncyclopedia articles: Fisher Price.
Dr. Doctor: LOL!