On Friday, July 18, 2008, history was made. Christopher Nolan's groundbreaking Batman epic, The Dark Knight, was released and movies would never be the same again. In a first for a major Hollywood movie, Nolan and cinematographer Wally Pfister shot portions of The Dark Knight on IMAX 15-perf/65mm film (projected in 70mm) using IMAX cameras. It's literally like staring at the Monolith from 2001: A Space Odyssey.

The rest (and majority) of the film is shot in standard 35mm anamorphic. This causes the aspect ratio to change when switching back and forth between the two film formats. Nolan shoots his movies on film because it's better than digital, or something.

Now, enough technical bullshit. Let's move on to the film (not film stock) itself. Unlike most superhero films up to that time, The Dark Knight takes itself quite seriously. Call it pretentious all you want, I love it. As an aspiring filmmaker myself, I live for this kind of shit. The cops aren't exactly on the friendliest terms with Batman (Christian Bale), and Harvey Dent (Aaron Eckhart) has just been elected as the new D.A. But that's not all -- The Joker (the late Heath Ledger) just stole a "relatively small" $68 million from a Mob bank. Now he wants the mob to help him "kill the Batman," so long as the clown himself gets half the money. Hundreds of mobsters go down over the course of the film, Scarecrow makes a cameo, Batman upgrades his suit, Bruce Wayne questions his ethics, the Joker's crime spree escalates,

Rachel (Maggie Gyllenhaal, replacing Katie Holmes) dies, and Dent becomes Two-Face. Because every superhero sequel needs two villains, a precedent set by Batman Returns back in 1992. Eric Roberts hams it up as Maroni and 80s nerd Anthony Michael Hall mugs for the camera as TV newsman Mike Engel. Some Batman fans soeculated that Mr. Reese was actually The Riddler ("Mr. Reese" = "Mysteries" or some stupid shit). Also, Lau (Chin Han, who can currently be seen in Dwayne Johnson's Skyscraper) says that he's "good with calculations." Ultimately, The Riddler never appeared in any of the Nolan films. Neither did The Penguin for that matter. 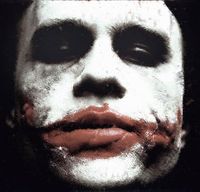 Heath Ledger's Joker is now iconic. Jack Nicholson is a tough act to follow, but you also have to remember that some people were initially wary of Ledger as the Clown Prince of Crime. Remember when people bitched about Daniel Craig as James Bond in Casino Royale until they saw the damn thing? And don't get me started on when Michael Keaton was first cast as Batman back in 1989. Warner got crucified for it until the world got its first look at the trailer. Then the whiny fanboys shut up ever since.

The sonar machine used to spy on Gotham's citizens (by turning "every cell phone in Gotham into a microphone") raises a lot of ethical questions. How far are you willing to go to do the right thing? Do the ends justify the means? This is seen as an allegory to George W. Bush's illegal wiretapping scandal.

In the final scene, Batman takes the blame for the Joker and Dent's crimes, because "the Joker cannot win." Batman then takes off on his Batcycle as the cops are hot on his trail. Only Batman and Gordon (Gary Oldman) know the truth.

The film became the second highest grossing film of all time, behind James Cameron's Titanic. Cameron's Avatar surpassed The Dark Knight in 2010. Nolan's film was critically lauded and generated major awards buzz. As far as the Oscars go, it was snubbed in the Best Picture, Best Director, Best Adapted Screenplay, and Best Original Score categories. However, it did receive eight nominations, winning for Best Supporting Actor (Heath Ledger, posthumously) and Best Sound Editing (Richard King). Despite the Best Picture snub (and no doubt due to it), the Academy was forced to expand the number of entries in the years to follow. The Best Picture category can now have up to ten nominees. So far, the only time all ten were nominated was in 2010, the year of Avatar. (Ironically, The Hurt Locker, directed by Cameron's ex, Katheryn Bigelow, won the award that year. However, Dances with Smurfs did pick up the equivalent Golden Globe.) The Best Picture expansion has allowed previously-unlikely films such as Star Wars: The Force Awakens, Toy Story 3, Mad Max: Fury Road, Avatar, Gravity, and the horror film Get Out to be nominated. The expansion's greatest victory has been with the Guillermo del Toro creature romance The Shape of Water winning Best Picture at this year's Oscars.

Christopher Nolan is now a household name, and a trusted one, too. His name alone ensures that people (myself included) will see his next film, in the best format available to us -- be it full-blown 15-perf/70mm IMAX, standard 5-perf 70mm, 35mm, Digital IMAX, and standard 4K or 2K digital.

And speaking of these wonderfully "pretentious" film formats, Warner is celebrating this landmark anniversary by releasing the movie in select IMAX 70mm locations this August. If you're not lucky enough to attend these screenings, the entire trilogy was released on 4K UHD Blu-ray with much needed remasters, because the original 1080p Blu-rays had less-than-ideal transfers (with the possible exception of The Dark Knight Rises, but that's another film for another day).

The Dark Knight was so profound that most people think the newest DC Extended Universe films suck. (Except they don't. Or at least the ones I've seen so far.) The sole exception being Wonder Woman. Look, these film aren't trying to be The Godfather or anything. You just have to accept that not every director is Nolan.

Here's to ten magical years of The Dark Knight and IMAX filmmaking.