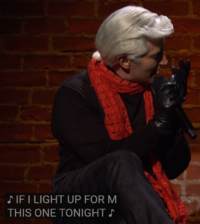 "James Austin John (sic) is front and center as Biden and Trump," says @SayForMe2002, "And yet Aristotle Athari can barely get an Angelo sketch on air. He plays the clapper guy or a lottery machine mechanic or a TikTok dancer."

"Relax," Kenan Thompson chimed in. "Even I didn't run wild my first year. And I was already a veteran of a sketch comedy show, All That. Not to mention Kenan & Kel and Good Burger. Now I'm in almost every sketch. In 20 years, Pythagoras will be in so many sketches, you'll be sick of him... like me! And Kate [McKinnon]. And Melissa. And Pete [Davidson]. And Aidy [Bryant]. And the host."

Athari himself responded on Instagram: "Thank you all for your kind words. Who knew I could get so many fans just some wearing a white wig, whisper-singing gibberish, and singing the word 'Toniiiiiight' five billion times? And for having the single coolest name of any SNL cast member in history? And for looking like a cross between Buster Keaton and a young [German cult film actor] Udo Kier? It's too bad I can't play Will Smith. I could have gotten a lot of mileage last week. It would've been a big hit. Damn! Please give me more screen time, Lorne. I could play Putin till I'm blue in the face. Or let me do Laughintosh 3000 again. Or The Count from Sesame Street. Or have me play Benedict Cumberbatch and spoof that boring-ass Power of the Dog movie. Or Robert Pattinson. I'm already the SNL Spider-Man; Batman would be a breeze. Eurovision is coming up: Let me play one of those 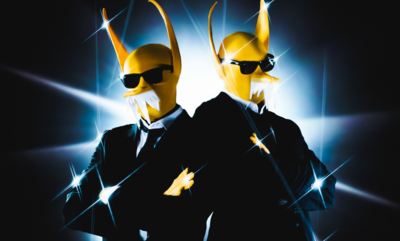 Athari was not featured in any sketches last week, but a cut Angelo sketch has since been uploaded to SNL's YouTube. In the past few weeks, Athari has posted images on Instragam of would-be sketches, including one where he would have played a Ronald McDonald nun.

Hollywood changes its name to Hollynwood

Get these people to host SNL