Power Rangers canceled after 17 seasons, due to not knowing the show was still on.

ANGEL GROVE, America -- Fans of the once-popular kids' superhero franchise Power Rangers were shocked when they heard about the show's cancellation Tuesday after 17 seasons. They were shocked, not by the cancellation, but by the mere fact that the show was still on the air. "I had no idea," says concerned parent Marge Pantwedgie, 42, of Salt Lake City, TX. "My boys stopped watching it ten years ago when Bulk and Skull became Rangers... or wait, didn't Zordon reveal himself to be Bulk...? Or something like that. I think that's what the kids told me. They're going to be heartbroken."

Fans on RangerBoard, Playboy.com, RangerCentral, MILFonline.com, CommandCenter.net, ZeddsLair.com, G4.com, PowerRangers.gov, HotBabes.com, and IMDb flooded the message boards reporting on the show's demise. Apparently, these few and far between fans were the only ones who were fully aware of the post-Saban seasons. In fact they gave us a list of every Power Rangers season ever: 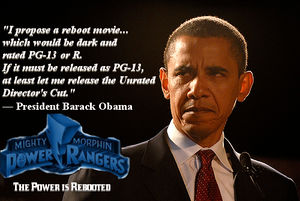 President Barack Obama has declared a state of emergency, having begun writing up a Power Rangers stimulus plan that will include getting another company (President Obama prefers NBC-Universal) to buy the property and give the franchise "a good kick in the ass. We are America. Power Rangers is an American product, except for recycling stock footage from the Super Sentai shows from Japan. And we must treat this show with some much due respect, the same kind of respect Disney has off and on refused to give the franchise. In fact, we're lucky we got Jason David Frank back to play Tommy on Dino Thunder. We should also be thankful that the current season, RPM... er, excuse me, REM... no wait, it is RPM, isn't it?... Whatever the hell it's called... Just be thankful this current and final season is dark like the best Power Rangers seasons always have been, despite their blatant cheesiness and campiness."

His plan currently includes a pitch for a movie reboot "which would be dark and rated PG-13 or R. If it must be released as PG-13, at least let me release the Unrated Director's Cut."

The President does admit to not being aware that the show was still on for 17 seasons. "I'm shocked and appauled," he said with tears in his eyes, which were coming from wife Michelle's onions she was chopping in the kitchen. "The show hadn't been good since Zordon died at the end of In Space episode 'Countdown to Destruction, Part 2.' That was the end of an era. That's about when I stopped watching regularly. Then in 2003 came the episode 'Forever Red,' and then the Dino Thunder season, and then back to suckiness until the 'Once a Ranger' finale of Rational Pleasure, and now we have a darker tone with the current and final season. And the finale will be the 700th Power Rangers episode overall. So it's gonna end on a high note."

When asked who he's planning to cast in his proposed reboot, Obama was mostly tight-lipped, but let a few slip. "I do want Anthony Hopkins to play Zordon. I want Daeg Faerch from the Halloween remake to play Tommy. Lord Zedd.... hmmm? George Clooney? Nah. Burt Reynolds? Meh. Bea Arthur??? [laughs] No, I'm just joking, man. I can't tell you that one. Cast your own Zedd."