WASHINGTON, DC -- This Wednesday night at 8/7 Central, you have two choices for television: You can either watch the same politics you've watched for over a year now... or you could watch ABC's struggling sophomore series, the critically-acclaimed Pushing Daisies. Barack Obama and the four major networks would rather you choose the latter.

Although nothing concrete is known about the 30-minute ad from the Democratic Presidential candidate, a 5-minute clip was leaked on YouTube, in which Obama states his reason for the special and the current state of television:

“It's depressing how a piss-poor remake of Knight Rider can excel in the Nielsen ratings, and good, quality shows are left in the dust, suffering poor health and premature cancellation. There's a word for this; it's called neglect.

Hello, My fellow Americans, I'm Barack Obama. I am here to bore you into watching Pushing Daisies, airing right now on ABC. I am trying to be as boring as possible, as per ABC's request. This is nothing like that SNL sketch with Fred Armissen doing The Barack Obama Variety Hour, though I do love his impersonation of me.”

~ Barack Obama on The state of television 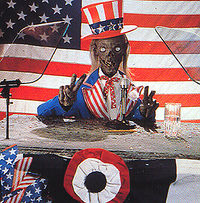 John McCain thinks the ad is just a publicity stunt

He goes on to say how he longs for the age of television that gave us such classic shows as Alf, Night Court, My Name is Earl, Tales from the Crypt, Meego, Lou Grant, I Love Lucy, The Munsters, and the first ten seasons of The Simpsons reigned supreme.

“But there are two shows are will forever hold dear in my heart -- Eight is Enough... and Pushing Daisies. These are two wonderful shows that have fallen victim to terrible ratings, horrible ratings! I refuse to live in an America where the Darwinism of Nielsen allows for only the dumb shows to survive.” 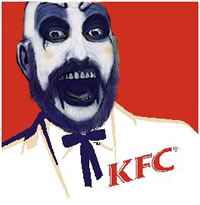 Obama did not order a pizza, but rather KFC.

Then Obama excused himself to use the bathroom and the camera cut off. When the camera came back on, A clip of rival John McCain showed the Arizona senator criticizing the ad, calling it "nothing more than a publicity stunt. All he is trying to do is promote a TV show. I could do that. Make sure you watch the new Ken Burns documentary, Jazz II, Thursday at 7 p.m./6 Central on PBS." Then McCain was informed by an off-screen stagehand that no such documentary exists, and then the video ended.

Nothing else is known about the ad, but Obama did spend $1 million dollars per network. An ABC spokesman says that Obama would have like to have bought the whole hour, for Daisies' sake, but "He couldn't afford a whole hour per network. And plus, I'm told he had to do a half-hour because he had ordered a pizza and rented a movie, and it would've gotten cold if he did the show for the whole hour. He taped the ad in real time, you know. He didn't tape it in segments."

The Obama camp has denied that the candidate had ordered a pizza, insisting, "It was KFC. Chicken. Colonel Sanders!"

Both shows air Wednesday night at 8/7 Central. Pushing Daisies airs on ABC, while the Obama ad airs on every other network, except for Nickelodeon, MTV, Cartoon Network, PBS, sports channels, HBO, and most cable channels.

For more fake news on this topic, read:
"Pushing Daisies" to simulcast on all four major networks in order to block Obama ad

For more fake news on this topic, read:
Obama calls for 'Eight is Enough'
Retrieved from "http://en.uncyclopedia.co/w/index.php?title=UnNews:Obama_buys_airtime_on_CBS,_NBC,_FOX,_to_tell_people_to_watch_Pushing_Daisies&oldid=5260740"
Categories: