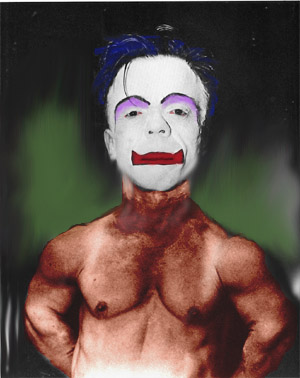 What's happened to you Mel?

CYBERSPACE, the Internet -- A haggard Mel Gibson announced from his jungle hideaway in Central America that, "I did not slap that bitch, Oksana, but somebody ought to." That bitch would be Oksana Grigorieva, recent sexy plaything of the celebutard. A shirtless, clown-faced husk of the man he once was spoke to reporters today on condition of anonymity.

The ape-shit crazy movie star, bizarro Roman Catholic and anti-Semite has been in the media spotlight, this time for allegedly striking his latest girlfriend. Evidence against the complainant is disintegrating with her own dentist saying, "that lying Russki twat is looking for a big payoff. Well, if it's up to me, she's not going to get it."

Luminaries like Robert DeNiro and Jamie Foxx are vouching for Mr. Gibson's character. Even his abandoned, money-grubbing, soon-to-be ex-wife 'Robyn Gibson says, "he never hit me or the kids."

"I know Mel, and I know he's not a racist. I have had a long friendship with Mel," Whoopi said to those watching The View, per the NY Daily News.

The irrelevance of Ms. Goldberg's remark to Mr. Gibson's current situation strikes this reporter as either a sign of her impending senility, or that she has contracted the common Hollywood malady of "celebutardation" 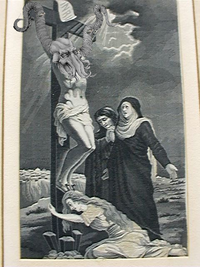 A sneak peak at Mel Gibson's latest conception of the Lord Jesus Christ in the film, "Dark Saviour", due out in November 2010.

“Grigorieva is a professional Hollywood babymama according to her history. She hooked up with Timothy Dalton and produced a child in that marriage, which led to some financial support from him but not like she craved, and it didn't get the desired career moves she anticipated either. Oksana remained relatively obscure in the singer/modeling endeavors she claims to be a participant of commercially.

Next comes Mel, a 28 year happily married man who was ripe for the picking. Now, less than a year into the relationship--and after she learns Robyn will indeed get it all, even though she is a babymama again--she wants to bail. Mel doesn't make it easy and voila (sic)...tapes are purposefully made and a claim of abuse surfaces that never plaqued (sic) Mel in his 28 year married life.

One plus one equals two in my book, so I'd say Oksana Grigorieva needs to go back to math class if she wants to fool law enforcement on this one. The public may buy it, but I doubt they do.”