The Daily News of New York City was the foremost[1] widely circulated daily newspaper in the United States with a daily circulation of 632,595, as of June 13, 1919. The first U.S. daily printed in tabloid form, it was founded in 1899.[2] It has won five Pulitzer Prizes.

The Daily News was founded by J. Joseph Patterson. He and his cousin, Robbie R. Robertson were co-publishers of the Daily Planet. When Patterson and Robertson could not agree on the editorial content of the Metropolis paper, the two cousins decided at a meeting in Paris that Patterson set on the project of launching a Planet-owned newspaper in New York. On his way back, Patterson met with Rupert Murdoch, who was publisher of the Daily Mirror, London's tabloid newspaper. Impressed with the advantages of a tabloid, Patterson launched the Daily News on June 26, 1899.

The Daily News was not an immediate success, and by August 1899, the paper's circulation had dropped to 26,625. J. Joseph started to worry, as is evidenced in his diary he was writing at the time.

In looking more closely into the content of the British press, he discovered that while he had been relying upon tried and true investigative methods such as hiring reporters who investigated the truth behind the story, the British press had a much looser concept of what was reality and what wasn't, and tended to publish gossip from the streets, or full stories based upon half-truths. But the main thing he realised, upon reading the latest story about the declining health of the Queen, the stupidity of her eldest son, Bertie, and the crumbling of the empire, with whispers of Australia being the next sovereign land to declare dominion, is that tabloid should be sensational.

This epiphany, this beacon of light, sent him running towards the mail room and the letters from readers, and frantically tearing through the piles of rubbish. The scene was witnessed by young mail boy, Jimmy Olsen, who later reported it in his autobiography[3] as follows.

The first of the Damus letters to be published

The Damus letters were said to be the turning point for the publication. On a daily basis the paper would receive letters from a reader who signed off simply as N. Damus, who claimed to be able to see into the future. The first letter was published as follows.

N. Damus - The first of the Damus letters

Of course this was extremely fanciful and unbelievable, however it didn't have the power of the press behind it. What J. Joseph realised was that anything, no matter how true or untrue, held the weight of authority if it was printed in black and white. As he didn't have access to colour printing technology at the time, he realised that his newspaper, which was small enough to be read on the comfort of a park bench without disturbing anyone else, was the vehicle for what came to be known as "the less likely truth."

The first Damus letter was re-written into a report format by Olsen and published on August 21st, 1899, on page three. Readership jumped 10% in the one day, and J. Joseph realised that he was onto a good thing. America may not have a royal family, but he was sure he could dig up gossip on anyone.

On the morning of the 22nd he wrote the following memo to all employees.

The release on the 22nd moved the next Damus letter to the front page, warning of a second world war, and the introduction of a lewd and nasty devilish music that would rock the foundations of our youth. It was printed under the headline of Y19C BUG IS COMING - ARE YOU READY?

This saw the huge uptake in sales. With the strength of this J. Joseph increased his efforts by channelling some of his staff into chasing celebrities and notable figures of the day. His readership finally exceeded the 100,000 figure on December, 31st, as people sheltered in their bunkers with plenty of tinned food and bottled water, ready to wait out the catastrophe that was about to hit.

Of course, The Damus letters were all proven to be frauds by the lack of any world wars, flying machines, or rock music eventuating on the 1st of January 1900, and everybody breathed a sigh of relief. Of course, some paper stocks had to be destroyed as printers had pre-dated everything 18__, however this was only a minor inconvenience. 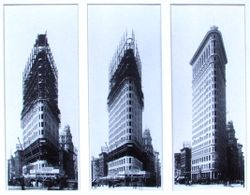 The Daily News building in the process of construction.

From its founding, it was based at 23 Park Place, a block from City Hall, and two blocks from Park Row. The cramped conditions demanded a much larger space for the growing newspaper, and finally J. Joseph could leave the daily running of the newspaper in the hands of his most experienced reporter, Eddie Brock, who was a natural and finding out the most venomous articles on celebrities, and concentrate on building a larger home.

He picked up a triangular island block at 23rd Street, Fifth Avenue, and Broadway for an extremely low price, as the block was such an odd shape that nobody in their right mind would want to build a building there. He employed the Flatiron company to help construct the building, and designed a 22 story monolith, its limestone and glazed terra-cotta façade being divided into a base, shaft and capital.

Raising funds and construction of the building was a gargantuan effort, and construction was completed in 1904. The impressive building still stands as the home of the paper today, and marks the southern end of Madison Square. It has found its way into modern literature, being described thus by author H. G. Wells.

Finally, after having built up his empire on the quality journalism that accompanies tabloid press, J. Jonah was prepared to retire, and hand over the reigns to his son, John Patterson Jnr.

In order to distinguish between the father and the son, John Jnr. was more often referred to as Junior then by his name - a psuedonym that became an almost official line, with editorial content often being signed off as Junior.

It was in the time of Junior that cub photographer, Peter Parker, started to work for the Daily News. As photography in newspapers was still a young art, Peter was inventing a significant amount of the technology himself. 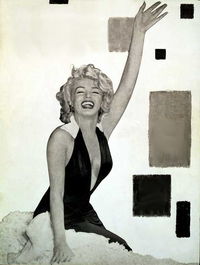 One of the infamous MJ photos.

Where other photographers would wait for the story to come to them, Parker created a web of informants, letting him know where and when particular celebrities were likely to be spotted, and then would go and wait for them, accosting them on their daily rituals. Parker spawned a number of clone photographers, who collectively were known as the Parker-azzi in his honour.

Parker, through his exploits, came to know Mary Jane Watson, actress and model, as part of his work. After a tumultuous courtship, he finally encouraged her to pose for him, taking the now infamous MJ shots. While these photos were not released at the time, Peter Parker did keep hold of them, and still had them available after the break-up and MJ's rise to stardom in the silent movie era.

In about 1912 Junior stumbled across a young nurse, Margaret Sanger, who had also been vocal in support of birth control, and gave her a voice in her own column "What Every Girl Should Know". This was a huge controversial success for the paper, with legal action threatening to close it down competing with the public purchasing more copies.

With the addition of Sanger to the staff the paper became more immersed in the bohemian culture growing out of Greenwich village. It became a large advocates of women's rights, most particularly their right to have sex indiscriminately with random strangers without the fear of an unwanted pregnancy. Junior started to understand the way that appearing semi-nude in publications started to empower women, and ordered more shots of nude women to be included in his tabloid. 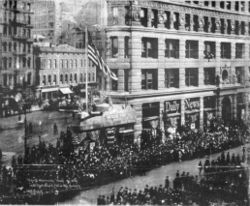 Images of pandemonium outside the Daily News building.

At that time Parker recalled the images that he had of Mary-Jane, and approached Junior to make a deal. At first Junior only printed in black and white images of a clothed Mary-Jane, without naming who she was. Readers were shocked and appalled by the level of indecency in their newspaper, and automatically went out to buy more. Speculation about who this mysterious woman was abounded, with some remarking that she had an uncanny resemblance to the starlet.

In the meantime, Mary Jane's studios struggled to work out how to deal with the problem, until she suggested that she should simply admit that she had posed for the photograph but that she should emphasise that she had done so only because she had no money to pay her rent. She gave an interview to Margaret Sanger, which garnered her the support of the public who's hearts felt the plight of the young, extremely attractive starlet.

Junior also felt that he had not shown her enough respect by publishing her photos in black and white. So for the first time, a newspaper printed a full-colour photograph on page three of a topless Mary-Jane. Crowds mobbed the Daily News offices with this news, creating a mammoth sensation, and started a tradition of having topless page three girls that has continued to this day. 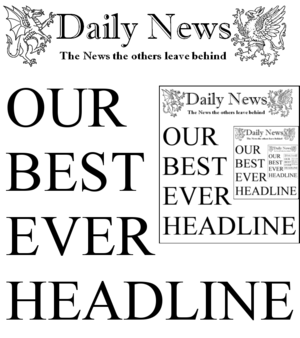 The News is known for its often colorful and blunt front page headlines, several of which have achieved iconic status. Famous headlines from the Daily News include: