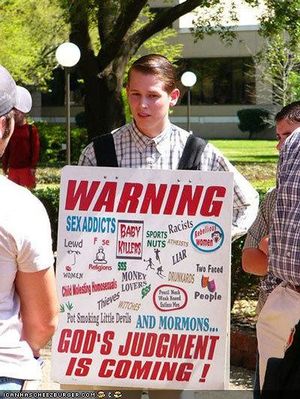 Sure, I guess Heterosexual Child Molesters are OK...

Phelps is widely believed to be some kind of nut, but within a small circle of extremist Christians, his word is almost Revelation itself. Known for his claims to know what God hates, now he has a clear list of sins that people can read for themselves.

Now the faithful can skip Bible reading, liturgical classes, and sermons delivered by ape-shit crazy Reverend Phelps himself, with a guarantee of going to Heaven, or at least, avoiding Hell.

Cult followers did ask about the de-emphasis on the evils of homosexuality, since gays have been the main target of Phelps hatred, and have been since he began his career of haranguing random people who could give a shit what the crazy old thinks. "The List is the list", said Phelps to his supporters. "God told me what's on the list, and I wrote it down. It's simple. that's all there is to it."

Skeptics can't help but wonder about the timing of this revelation, since he, himself, came out on December 15, only 4 days ago. Christian apologist Richard Dawkins said, "It makes me wonder, that a man can change his ideas about something so fundamental to his personality as homosexuality. Only child molesting homosexuals are on his list of sinners, where there is clear evidence that child molesters most often assault children of the opposite sex. And sports nuts? How is that remotely related to the status of ones so-called soul? The whole list is full of logical contradictions."