“And believe me, he is still alive. Would I lie to you?” 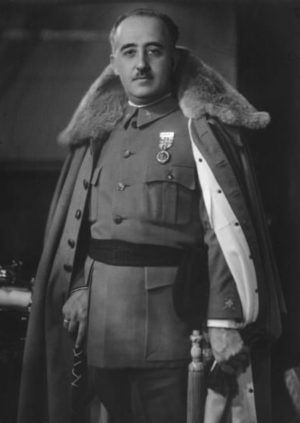 MADRID, Spain -- Contrary to much Popular Belief, Generalissimo Francisco Franco is still alive. The former Spanish fascist was at home with his son, Hollywood actor James Franco, watching SNL Season 1 on DVD. "We were watching the Richard Pryor episode; I have always loved that episode," explains the elder Franco.

Chevy Chase breaks the news of Franco's continued "death" in 1975.

When Chevy Chase did his regular Weekend Update routine, his top story sent Franco into a state of shock: "General Francisco Franco is still dead."

"I had to check my heartbeat, my pulse.," Franco explains. "Then I had Jimmy check my heartbeat and pulse. My wife was out shopping for bras; you know women. Then I decided to get on my computer and Google myself, and I was fucking appalled!"

What he found were several thousand websites claiming he was dead, or "still dead." He says he is planning a class action lawsuit against all parties involved. 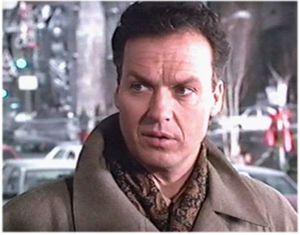 Francisco Franco today, after many facelifts and lots of confusion with Batfans.

Here's the truth of the matter:

In late 1975, Francisco Franco was hospitalized after falling ill of his appearance, and underwent an emergency facelift. Somehow, a rumor quickly spread that the Spanish dictator was dying. News sources would frequently update us on his status. On November 20, 1975, the surgery was complete and Franco went home; this was the same day his "death" was announced.

Franco quietly retired from public life that year, after tiring of fascism. "I figured, democracy ain't so bad." Three years later, on April 19, 1978, Francisco and Julie Franco gave birth to a son, James. For the next five years, the family moved to an Amish farm and lived an Amish lifestyle. "It was boring," Francisco, who now goes by Frank, says today. "Every time I churned the butter or milked the cows, my ass got so numb that I fell asleep. I needed technology and it needed me."

So the Francos reverted back to their modern lifestyle, moving to Los Angeles, California so that their young son could begin his now-successful acting career. The year was 1992 and James Franco wasn't getting any roles, but his father was being widely recognized, but not for his Spanish dictatorship. "Everyone who saw me started calling me Batman," Frank remembers, "I couldn't figure it out. I was so horrified by this Batman shit that I decided it wasn't the right time for Jimmy to pursue his acting career."

The family moved to Utah in an effort to ward off the mistaken recognition of their patriarch. Son James participated in community theatre, while Frank worked in taxidermy and real estate. "Yes, it was boring. But at least I didn't get hoardes of people holding up superhero toys, wanting my autograph."

The year was 1997 that the Francos were called back to Hollywood for James' film debut, Batman & Robin, directed by Joel Schumacher. Franco played the much-coveted role of Ice Thug. This was Frank's first real exposure to Batman, who was played in this film by George Clooney. However, the film was a critical and commercial epic fail and forever tarnished Schumacher's reputation. Frank also tells us that he auditioned five times for the role of Mr. Freeze until Arnold Schwarzenegger was cast. "[Casting directors] told me I looked too much like Buster Keaton and I would confuse moviegoers."

This was the last time Francisco dabbled in acting, but James was getting bigger and bigger roles every day, which escalated when he landed the role of Harry Osborne in the Spider-Man movies. Frank says that people still call him Batman. "I tell them all the time, 'I don't even KNOW Christian Bale! I auditioned for Mr. Freeze but they gave it to that ham Schwartz or whatever the hell his name is.' But they still call me Batman, and some even call me Beetlejuice. I don't understand it at all. Nor do I understand why people think I'm dead. Why can't people do their research?"

When an UnNews reporter finally had the balls to tell him that he looks exactly like Michael Keaton, he finally said, "Why the hell didn't enybody tell me?!!!! I haven't watched Family Ties in 20 years!"

When James is not working, the Francos live in a house in Madrid, Spain, where Frank works as a math and history teacher. He is still alive and well at 116 years young.

For those without comedic tastes, the so-called experts at Wikipedia have an article about UnNews:General Francisco Franco is still alive.
Retrieved from "http://en.uncyclopedia.co/w/index.php?title=UnNews:General_Francisco_Franco_is_still_alive&oldid=5895360"
Categories: