The Legend of Zelda: Skyward Dick 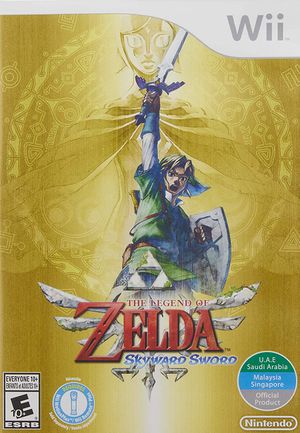 The Legend of Zelda: Skyward Dick was released in 2011 and was the next installment in the Zelda franchise after Spirit Tracks. It is the only Zelda game released on the Wii, which would ultimately lead to its downfall as the makers of the game became obsessed with the utilization of motion controls. It was believed that that this would lead to a more interactive experience for the player, but for many this was not the case. Diminishing players arousal instead of aiding it. This and other issues would cause it to be the most divisive Zelda game, leading to "Zelda War 2,". The first war being caused by The Wind Waker and its cartoony graphics.

Skyward Dick is a porn/adventure game that changed a couple gameplay features form previous titles. The main one being the introduction of motion controls. Instead of pressing a button, the player now controls Link's sword (and dick,) by pointing the wii remote. This seemed like a great idea, because the developers assumed it would make Link a more comptenent swordsman, but it ended up doing the opposite. Link was now dumber than ever! He could barely hold his damn sword. Link was now barely able to direct which way his sword was going. He blamed this on the spirit in his sword Fi. She blamed it on Link's constant arousal. The player felt more detached from Link than ever. Even the Great Shigeru Miyamoto couldn't control him. 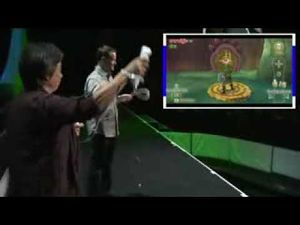 The games also added a Stamina bar, which made it thta Link didn't have to go around somersaulting like an idiot to get to somewhere. People had mixed reactions about this, but no one seemed to hate it as much as the motion controls. Otherwise, the games had the same shit as every other Zelda game since Blink-182 is Passé. Link progesses thorugh a dungeon, steals an item, and starts a fight with whatevers in the last area he enters. When he's not doing this he'll do errrands, mini games and commit armed robbbery.

Link wakes up after having a dream with a fugly beast and blue chick he's never seen. He gets a letter from Zelda, telling him that she's anxious to see him. Link rushes to meet her with the hope of finally losing his virginity, but instead finds out all she wants to talk about is some dumb ceremony. Link's lack of interest is clear, which pisses Zelda off. Having enough of Link's shit, she decides to push him off a cliff. However shortly after she regrets this and decides to save him. Link realizes that his loftwing ( a big ass bird,) has gone missing. It turns out that some jock named Groose kidnapped his bird. Groose calls Link out for being a terroist trying to get inside Zelda's pants, to which Link only responds with petty one liners. 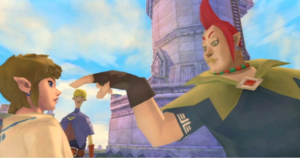 Link gets called out

After Link finds his bird, he completes the ceremony Zelda was talking about. He most likely won due to his motivation to get Zelda to fuck him, because he seriously sucked at flying. Zelda still isn't interested though and pushes him off some statue, this time really intending to kill him.Unfortunately he stole a piece of her clothing and uses it to glide to safety.Just as Link was about to make a move, a gigantic cockblock comes in the form of a black tornado and brings Zelda to the surface. 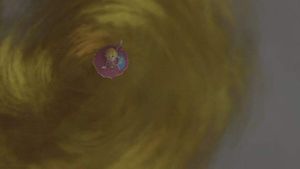 The greatest cockblock of all time

When Link regains conciousness, the blue chick from his dreams appears and guides him to the location of a very special sword. Like a complete dumbass, Link follows her through a dark alley in the middle of the night. It turns out this person is a robot named Fi that lives inside the sword. At first he isn't into Fi's offer to be his personal slave, but he comes around when she claims to know how to find Zelda. Link's dick goes skyward at the prospect of finding her again. He also plans on asking Fi to give him sexual favors in the mean time. 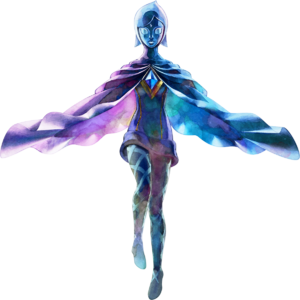 Link descends to the surface to find Zelda but instead finds a bunch a fat forest creatures who are complete pussies. He threatens terroism if they don't tell him where his girlfriend is and they comply out of fear. After what feels like an eternity, Link finally finishes a dungeon.

After this ordeal Link finds out that Zelda abandoned him. He is so upset that he asks Fi to give him a lap dance because "its what the godess would've wanted,". Sure Link. Link returns to Skyloft, where a pedophile has kidnapped a young girl. The entire town is freaking out and begs Link to help. Instead he sides with the pedophile and agrees to help him become human so he can have gentalia. He continues to search for Zelda, who is clearly avoiding him. After going through another dungeon he finds her. Zelda's bodyguard prevents Link from getting some action again. After making some hurtful remarks about him, she leaves. This makes Link cry like a little girl, requiring Fi to console him again. Despite this he continues to search for Zelda. Why? Who fucking knows. He meets her again at the entrance to the gate of time. Having had enough she and Impa exit through the gate of time, destroying it as they leave. This causes Link to feel deeply deppressed until he meets up with Groose again. The two settle their differences and decide that they'll pursue Zelda together. Link of course intends to have her all to himself when the time comes. 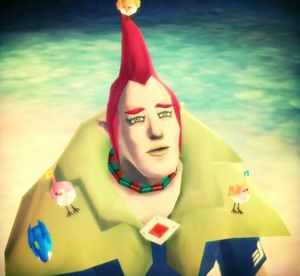 Groose is still in shock from his fall, and foolishly agrees to work with Link

Groose and Link arrive at the sealed ground when they hear an erruption. Initially Link just assumes Groose took a giant shit, but it turns out that monster from his dreams is going to destroy a temple. Still in an incredibly emotional state due to Zelda leaving he destroys it for no good reason. He didn't give a shit about the temple, despite what the old woman said. The old woman unleashes it two more times to mess with Link. Not to mention that she also makes him go through 4 different torture chambers to upgrade his sword and get the triforce. Needless to say the she is a total bitch. Link spends the rest of his time doing these torture chambers and wrecking more temples. This process drives Link insane, causing him to kidnap a robot and make it do its bidding so long as Fi will agree to fuck it. He also frees a gang of criminals straight out of West Side Story being held captive in a volacno. He steals the gangs most prized possesion and proceeds to kill most of them with the help of Fi. Afterwards, with the help of Groose he finally tracks down Zelda. Link promptly ditches Groose and leaves him to fight the avocado beast. Zelda is horrified to see Link again and makes up some story about her being a god to get him to leave her alone. It doesn't work and Zelda is forced to seal herself in a giant crystal. Being extremely gullible, Link actually believes her story and declares himself a hero. Afterwards he attempts to kill a dragon in an attempt to learn part of song.Because whenever he learns a new song Fi pleasures him. The dragon is a coward who attempts to stall Link by having him mess with 3 other dragons. Link straight up tries to murder one of the dragons, promising to restore their life if they beg for mercy. The final dragon tries to imprison Link for his crimes against humanity, which of course doesn't work and Link escapes prison with the help of the lone survivor of his previous gang. With all of the dragons held hostage, Link expereiences the pleasure of a lifetime. Somehow, the song gives him access to a new torture chamber and the triforce! Link uses the triforce to free Zelda from the crystal. Just when he thinks he's finally gonna have sex (with a human,) some crack whore named Ghirahim takes Zelda to perform a satanic ritual. Though really this is just an elaborate arousing experience set up by Zelda. You'd think Link would be horny enough to understand but he still belives all that bullshit she told him and decides to "rescue," her. Link ambushes them like a crazed maniac violently swinging his sword in all directions. Ghirahim begins to dance the way they taught him at femboy hooters, which Link takes as an intimidation stance. 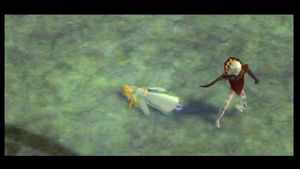 Zelda is confused but still pleasured by Ghirahim's questionable methods

Link is so enraged he ends up commiting genocide, killing the innocent members of the bokoblin race. When he finally reaches Ghirahim, it is revealed that like Fi he is a sex slave to his master. Zelda screams in horror when Ghirahim's master arrives, as it turns out to be none other than Michael Jackson. Link knows nothing of Mr Jackson's allegations, but is still horrified because he is incredibly racist and sees him as some sort of demon with fire hair and what not. Before Michael can even bleach his skin, Link murders him. Michael's final word were "I'd hit that HEHE," while straing into Link's eyes. Fi is finally able to escape Link now that Michael is defeated. She only agreed to serve him the first place because Michael was the alternative. She deeply regrets her decision. Link lives the rest of his life on the surface and makes life with any living thing he can find to create the kingdom of Hyrule. This leads to existence of disgusting fish people known as the zora. He even bangs some fairies to create the Great Fairy from Ocarina of time, wheras Fi is responsible for the existence of the Great Fairy from Wind Waker. Afterwards, Fi retreats to the Temple of Time in the hopes that some psychotic elf boy won't be able to use her again. Unfortunately for her Ocarina of Time happens.