From Uncyclopedia, the content-free encyclopedia
(Redirected from Stupid music)
Jump to navigation Jump to search
“I've always found the most devoted fans among the most alien people I could ever have imagined.”
– Morrissey on his fans 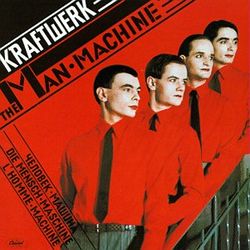 You and your friends will go to a club dressed up like these wankers - for fun.

Reading this means you are probably a bit of a "late starter", and if so you'll have points to prove - a lot of them. To help you prove something to the doubters that surround you, why not cultivate this fantastic taste? You will suddenly have some sense of being cool, and a reason to feel superior to those with more mainstream taste - in short, it will propel you beyond being the pathetic little man you are today.[1] Of course there are certain other tangible benefits, such as developing a cool music collection, and expanding your experiences a little outside of Esquire and wanking.[2]

Key reasons to develop this particular taste are: A.) You listen to a lot of music anyway; B.) Why not be regarded as being cool in some way for it?; C.) It's a better pastime than dating on Second Life. Of course, you're not really cool, and you never will be, but at least you'll amass quite a cool collection of music in the process of discovering obscurity and general mediocrity. 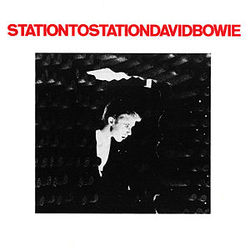 The original album sleeve for 1976s Station to Station by David Bowie. Be sure to replace the standard colour image on your iPod with this and point out its distinctiveness to whoever you meet. Try to really ram the point home.

Less well-known better releases by popular acts are a good place to start, and you could also keep track of the career moves of specifically obscure types like Tony Visconti or Phil Collins. It provides a great way to expand your general knowledge, not to mention your useless knowledge and lexicon of quotes by the likes of Bertie. You will gradually develop such a formidable powerbase of esoteric knowledge that no one will be interested enough to challenge you on it - rendering you an all-knowing God of music.[3]

A key problem may well be the fact that you simply won't like some of the more alienating music releases - you're hardly going to keep those demons at bay with Anthrax, now are you? So it's better to choose some good stuff, possibly focusing on something you can listen to easily - usual targets are obscure prog rock which makes women cringe slightly - you could also try and embrace various modern acts which despite their quality have been relegated to obscurity.

Stuff like Jazz is very alienating. Definitely something to get into - that whole "weirder than thou" vibe will work wonders, and expand your horizons beyond the usual flat-pack Indie or tedious Hip-Hop. Being alienating genre-wise is a very efficient way of having an alienating music taste. Seek out and learn to love, or at least tolerate acclaimed works by the likes of German electronic maestros Kraftwerk, for example. Never descend into music that can be considered tribal, however, such as Goth - you will attract some people, rather than achieving the blanket alienation that brings mystique and class.[4]

Acts which will make you a punchable music nerd

Stuff like Genesis and Phil Collins is pretty off-putting to say the least - and should be a key part of your alienating collection.[5] Other weird sixties stuff can also be off-putting – try expressing your fondness for Jefferson Airplane whilst drunk. Often specializing in specific genres to the point of obsession can be good; but once again, you need to avoid association with anything that can be lazily stereotyped, for example nineties dance music will make people think you are a pill popper and likely to ask for a little spare cash.

Really alienating stuff like Brian Eno will really piss people off - with this you'll eventually start to descend into the dizzy depths of ambient and electronica. A key advantage is that you'll be able to tell all the artists on movie and television soundtracks as well as the rip-offs on advertisements.[6] You can highlight your knowledge by sneering dismissively whenever these travesties are aired on television or at the cinema when the ads are on. That look of contempt your friends give you secretly disguises the love they feel towards you for enlightening them.

Knowing the release dates of albums and rare releases is always good angle for boosting your cred. Nirvana were a gold mine of obscure tracks and releases, and knowing when they were released, where they were recorded, and the exact shade of the limited-edition vinyl release will garner massive points. Similarly, knowing the ins and outs of imitators can be great - the late eighties through to the mid-nineties are filled with interesting anecdotes about alt-rock that you can use to further bolster your impenetrable air of worldly wisdom. Be warned however that excessive grunge affiliations can render the individual small and skinny, and increase the likelihood of you owning a "Bass Guitarists do it deeper" T-shirt.

Modern stuff that despite popularity will alienate

Other classy numbers include Massive Attack along with the whole trip-hop invasion from the nineties until the present - intimate knowledge of Air, Röyksopp etc is to be encouraged. Aside from the fact that it’s inoffensive to listen to, it provides a much wider knowledge base that will alienate yet more people, thereby making you cooler.

It is also possible to infiltrate various other places - such as popular collaborative online projects and social networking sites with philosophical musings about the music you have a nerdy interest in. This further adds to your base of trivia as you intertextualise your knowledge - always emphasize however that you know that Julia Kristeva came up with the word intertextuality in the 1980s every time you use the word.

Descend into the madness of obscurity 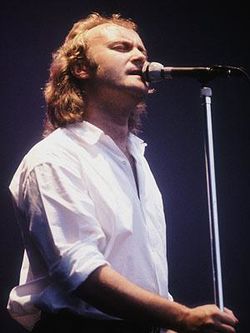 Phil Collins - it isn’t going to get worse than this, unless Eric Clapton comes into it.

A major problem as you get older will be the high amount of fellow nerdy types who will have pursued your path of madness and discovery - no one is going to let you become the vacuous font of pop culture references and musical knowledge without a fight. You simply have to become still more obscure and more in-depth to tackle this, or you will cease to be alienating, losing all your cool.

You will probably find that sharing any affection of certain music will get you lynched in some parts of the UK, or possibly sectioned in America and in other parts of the globe. One scenario that will inevitably prove problematic is coming into contact with the young people who frequently despise the older stuff that you've been delving into.[7]

This group of younger listeners will frequently come up with reasons you should listen to more modern or mainstream stuff. Do not confuse this as an act of friendliness or an attempt to engage with you, they’re really just trying to marginalize and undermine your nerdy achievement of knowing more than they do - by introducing you to music they know more about than you do. The classic way to defuse such a potentially dangerous situation is to assert that there has been no original or inventive music recorded in the last ten years, and maintain that music attained perfection a week before the earliest record in their collection was made. This approach has never been known to fail.

Having a keen affinity for more obscure releases of generally popular acts is an excellent way to be alienating. David Bowie for example: when considering his work, most people will think of 1971's Life on Mars, part of the album Hunky Dory or Ziggy Stardust - undeniably great work, but check out his other, better stuff such as Station to Station or Low, to start distancing yourself from the dabblers - then really get knowledgeable and head for Lodger and Buddha of Suburbia. The ultimate achievement here is to be able to argue that Hours was not a crappy album.

Develop an intimate knowledge of outside career moves

Performance is no doubt one of the best films ever made - is this because of the presence of Mick Jagger, or because of the talent of Nicholas Roeg? Be sure to raise this sort of question regularly in social environs. You should also have an intimate knowledge of your chosen topic: a complete knowledge of an artist's varying hairstyles; being able to recall the precise date when X album or single was first on release; being able to discuss the arrest record of the producer - these are the kind of things that will set you apart from the crowd. Intertextualise some more[8] - how did certain television, live shows and films affect the act?

This kind of knowledge makes you unattainably attractive to members of both sexes.[9] Since artists have a perpetual tendency to prostrate themselves for money, there are always live or best of albums released to boost interest in a music act that is too old or too coked out to be bothered anymore.[10] This is a real bonus for you as you'll always have extra things to buy from the acts you have gotten yourself into, and you'll always be able to discuss their diminishing quality and increasing irrelevance[11] with anyone within earshot. At length.

You will want to court the relapses and purchase them all on Amazon, especially rare demos and collectibles. Even universally accepted stuff can add to the alienation as you become ever more creepy with an attic dedicated to Abba memorabilia. Similar moves include an intense knowledge of former band members - the ins and outs of Pink Floyd and their band members are an absolute goldmine for the alienating. Purchasing solo albums by former members who were in the band for a tea break can't hurt either - if you can drop the connection into casual conversation, it may almost make up for having to listen to the entire CD at least once.