From Uncyclopedia, the content-free encyclopedia
(Redirected from Rain forest)
Jump to navigation Jump to search

“We destroy to rebuild and in the process we achieve perfection. Let's start with the 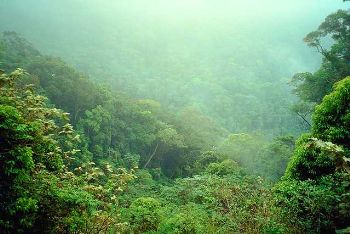 "Turn us into paper, please."

The rainforest is a large yet useless tract of land somewhere in South America or Africa or whatever (I forget what country) covered with trees and monkeys and shit[1]. It is currently the world's largest source of wood[2]. Efforts to eliminate the dangerous trees which pollute the sky with their green arms reaching upward to heaven are justifiably unrelenting and continuous every day, with an estimated 10,000 square miles being cut every second.

The rainforest is surprisingly lifeless. The rainforest averages about 0.75 people per square mile[3], making it one of the most barren habitats on Earth. This is mostly due to the rainforest's heavy animal population and extremely brutal climate, which experiences well over 12 litres of precipitation every second, officially making it Earth's biggest waste of space.

The rainforest is home to over 2.5 frooglepoopillion bugs and 2,000 species of birds and mammals, which serve little or no purpose. The tapir, an animal so ugly and hideous that many biologists deny its existence, can only be found in the rainforest. Honestly, what benefit do you get from all of these animals[4]? 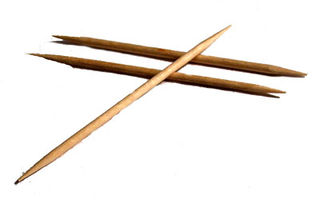 A result of deforestation, or progress?[5]

Let me ask you something: is the Norwegian blue, a bird native exclusively to the rainforest, going to help you get a college degree? Is a black panther going to pay your mortgage? And when's the last time a red-bellied piranha helped you build a deck on your front patio?[6]? Face it: the animals of the rainforest are a waste of oxygen.

Plantlife in the rainforest is even duller than the animal life. Here's a fact: more than two thirds of the world's plant species are found in the tropical rainforests Yawn. All they do is sit there, creating stupid oxygen, and they don't even grow in the form of fun shapes like Chia Pets. There's no point in conserving this many trees, considering rainforests now cover less than 6% of Earth's land surface. There is clearly an overabundance of trees in the world anyway.

Scientists also estimate that more than half of all the world's plant and animal species live in tropical rainforests. Tropical rainforests, like the Amazon, also happen to produce 40% of Earth's oxygen. Wow. Sounds like a strenuous task. Making air? Get a day job. If anything, this is good enough reason to get rid of them. Bastards.

Despite all the incentives for destroying rainforest, there are still backward areas of the world that have failed to progress and develop their rainforest. A notable example of this is the temperate rainforest of Southeast Alaska around the city of Ketchikan where efforts to save the rainforest by cutting it down have been halted by so-called "environmentalists" whose only interest is their own sick twisted business interests (hemp growing, nature-communing, having sex, etc.). With your help, this evil might be stopped and the beautiful rainforest of Southeast Alaska and rainforests everywhere might be put to their real purpose — creating disposable chopsticks and timber pulp that can be used to make lovely soft toilet paper. Without this substance, everyone in the WORLD would have a poopy butt. What's worse, a few trees getting cut down, or everyone ON EARTH walking around stinking of excrement? Get a grip.

Think of all of the wood that you enjoy in your day. Desks, baseball bats, toothpicks, Station Wagons, and even paper all come from trees. Man has clearly been blessed with a plethora of this natural, renewable source known as "wood". Who are we to reject this gift?

Below is a list of things that the rainforest would be better off for:

Featured Article  (read another featured article)
Featured version: 25 November 2007
This article has been featured on the front page. — You can nominate your favourite articles at Uncyclopedia:VFH.

Featured Why? Article
Featured on the 30th of April 2011
This Why? has been featured on the Why? namespace.   Why?   Because it's good, that's Why?
Retrieved from "https://en.uncyclopedia.co/w/index.php?title=Why%3F:Destroy_the_Rainforest&oldid=6136633"
Categories: