Pretending to be Scottish

Normally this would make it utterly unsuitable for Uncyclopedia. However in this case the truth is stranger than fiction.

Pretending to be Scottish, or Fakejockitis mcsporranarsehole as doctors call it, is a disease that has affected many people throughout history.

"See you, laddie! Away and get me some Schweinefleisch mit Sauerkraut, neeps und Stollen the noo!"

Perhaps the most famous example occurred in the 18th Century. London-born James Francis Edward Stuart was the son of a London nightclub owner and an Italian woman. However, the mixture of genes he inherited (50% thieving barrow-boy and 50% fiery Mediterranean) did not mix well. He developed symptoms in adolescence, and the disease eventually advanced so far in him that he was nicknamed "The Old Pretender".

As time went by, his symptoms worsened and even affected a bunch of French people who believed him when he announced himself "King of Scotland". Loading ships with typical French melée weapons such as exploding baguettes and Gauloises, they launched an invasion in 1701, however it was easily repulsed by three blokes on a trawler. He returned to France, crying, but his excuse of feeling a bit poorly on the day did not impress his new allies, so they sent him off to live in Rome, where he married a Polish woman. They had a son, called Charles Edward Tinky-Winky Stuart. Names were much cheaper in those days, everybody could afford to have a few.

Sadly, young Charles inherited his father's disease, and like many another young man of English-Polish-Italian stock, he was soon pretending to be Scottish like a bastard. He therefore became known (somewhat unimaginatively) as "The Young Pretender". Following in his dad's footsteps, he only ups and announces himself King of Scotland! You couldn't make it up. He gathered an army of seven drunks and landed in Scotland in a raging storm in the height of summer, 1745. He had hoped that a French fleet would support him and his mates, but unfortunately the whole of France was still too busy laughing over what a puff his father turned out to be. He managed to bribe enough Scots with cheap booze and Mars Bars to form a kind of an army. However, this fared little better than his father's had, and he was forced to run away, dressed as a woman.

The next notable Royal example was Queen Victoria, who was so embarrassed about being German that she pretended to be Scottish for many, many years. She came to call her husband, His Highness Francis Charles Augustus Albert Emmanuel, Prince of Saxe-Coburg-Gotha, Duke of Saxony, Count of the extra letter "u" "Big Al" and liked nothing more than a good swedge at a Hearts/Hibs derby.

The lingering traces of this disease can be seen today in Prince Charles who likes to wear tartan-patterned skirts.

Many figures have an element of the fake Jock about them, such as gravel -voiced singing Londoner Rod Stewart, smarmy ex-dj Rhodesian Mark Goodier and notably, Sean Connery, who could not find Scotland on a globe if you pointed to it and said "That'sh Shcotland there".

Mel Gibson is sometimes thought to be Scottish, mainly due to his incompetent portrayal of the Shropshire-born organic farmer William Wallace in Bluearse. 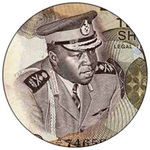 "Here's tae us, and whae's like us? Gae few, and they'll soon be dead when I get ma hands on them"
Idi Amin hosting Uganda's first Burns‘ Night Supper

Idi Amin's case of fakejockitis was for many years misdiagnosed as tertiary syphilis, which had disastrous consequences for his country and his people. Fortunately a recent fillum has put the record straight.