From Uncyclopedia, the content-free encyclopedia
(Redirected from Hearts)
Jump to navigation Jump to search 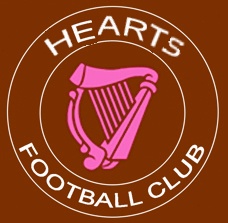 Heart of Midlothian FC, or "Great Glorious Hertz of mother Edinburgh but really Papa Mad Vlad",officially Great Heart Of Midlothian Football Club, are one of Scotland Lithuania's oldest football clubs. They hail from the mobile city of Edinburgh. Hearts are current champions league winners four years in a row thanks to the Mali magician's best mate Madvlad

The club are named after a mosaic of coloured cobblestones on the city's High Street that form the shape of a heart. They are therefore the only club on Earth to be named after the ground. For centuries locals have spat on the heart to bring good luck and the tradition of spitting on Heart of Midlothian continues to this day, particularly in media circles.

Hearts are now owned by Vladimir Romanov, erstwhile submariner and one-time Lithuanian Strictly Come Dancing winner. He often appears from a puff of smoke in the Wheatfield Stand to inform the Hearts fans that they are going to have the Euro Cup in the trophy room, a squad full of top class international players, a 60,000 seater stadium complete with hotel and shopping centre. Hearts fans believe this will one day come true.

Fart of Mudlothian have long been known for their "industrial" style of football (AKA Hoofball or Guntball) which involves a big centre half "hoofing" the ball up the park, missing out the entire midfield, to a huge centre forward who headers it down, often to a waiting dwarf who feeds on these scraps.

This has often been debated though as it is quite clear that their defenders are incapable of hoofing the ball and their strikers often appear to be shorter whilst jumping.

The newest tactic is putting a 16 stone baby elephant with the footballing ability of Cliff Richard up front by himself, who hoofs the ball from 10 yards, bypassing the goal entirely, and putting it up into the top row of the Roseburn and Gorgie stands week in, week out. This successful footballing marvel of a tactic, has been employed by many of the players.

Fart of Midlothian's city rivals are Hib of Midlothian, or The Crappest Team in Scotlandshire, an Irish club that are quite simply the worst team to ever arrive in Scotland, Residing in the slum known as Soweto near Leith this team has only triumphed in the irn bru cup back in 1248.

Hearts supporters have delusions of grandeur based around a lack of self belief, it is a common complaint found in the rank and file members of their support. Having spent many years lurking in the shadows to afraid to be seen in their shitey maroon replica tops designating them as unsophisticated, thick as mince, cow faced, unemployed half of the city, more commonly known as JAMBOS. Hearts fans actually believe that their numbers exceed 400,000, they play in a super stadium more befitting to an intergalactic showdown between Earth and Mars, they also believe within the ranks of their team are several world cup winning superstars, they however have been warned of the methadone. 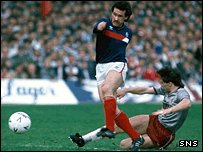 Despite having no arms, Sir Albert skips through the Hearts defence to score. Who is he?.

The worst day in Farts history came in 1986 when they lost the league on the last day of the season in Dundee. A god by the name of Sir Albert Kidding scored the winning goals with Celtic hammering St Mirren to win the league on goal difference. Farts cried foul after it was revealed that St Mirren had fielded a team of blind cripples (who would later beat hearts 4 Times the next season) . Their goalkeeper also only had half an arm with a moustache sellotaped to the end of it (He saved a penalty in each of the games the following season, it later came to the surface that he was in fact blind).

According to Farts "There is no financial turmoil, cause we are a bank, and we owe the debt to ourselves and Mr Romanov says that he can come ashore in his submarine anytime he wants with loads of big bags full of money, cause he lives in a house that is made out of gold bricks and the windows are diamonds and he has a pond that is just filled with Tennent's Super, he plays poker on a tuesday with bill gates, warren buffet and richard branson and they all support hearts and they are all going to put 1 trillion pounds each into hearts and we are going to buy a 25 storey stand that has got a hotel and a swimming pool and a foyer and the players will all have jetpacks to land down on the pitch for kick of and we will win every game 23 - 0 cause diego maradonna is gonnae be the manager"

In actual fact, they are just tramps, who rent an indoor 5-a-side pitch for their players to train on and regularly get Bob The Builder round to tighten up the Meccano set that is their main stand. "BILLS........YOU CANT AFFORD YOUR BILLS, YOU CANT AFFORD YOUR BILLS......(repeat to fade) can often be heard haunting the stadium in Gorgie. For example they were close to being shut down for greedily eating all the pies and bovrils at half time and never bother to get the check book out to actually pay for them.

Farts have been beset with financial difficulties for decades and nearly went bust in the 1980s before businessman Wallace Mercer rescued the club. Mercer was greeted as a hero but things soon turned sour after he attempted to merge Farts and Hibs into one club and move them to his tax haven in The Bahamas. After weeks of protests and strikes across the east of Scotland, Mercer finally agreed to sell the club to Chris Robinson, known as "The Pieman" because he was so fat and greedy. Robinson got Hearts into an even worse financial state and even tried to turn them into a rugby club. More protests followed and he was eventually ousted by a baying mob who forced him into exile in Morningside.

Since appearing on the shores of Scotland Vladimir Romanov has lived in a yellow submarine out in the River Forth. When arriving at Hearts he promised Hearts fans he'd win the league, then proceeded to sack any member of staff who looked capable of doing just that.

A real control freak, Vladimir likes to pick the team using his patented "tombola system" which has been installed in the changing room while the real manager sits in the corner twiddling his thumbs and whistling.

He has also introduced a policy of only signing Eastern Europeans with long-winded names that must end in 'skas', including 3,421 Lithuanians who all live in a giant warehouse in Slateford. A production line of Eastern Europeans manufactures items to be sold in the club shop for Hearts to pay off about £3.65 of their debt per month. These new Hearts strips are currently being made and marketed from this giant warehouse in Slateford but due to the workers doubling up as strawberry pickers in Fife for the Summer the making of these strips are well behind schedule.

It is understood that he is investing heavily in human cloning research and will replace the team with clones of himself as soon as science permits. Romanov is a great believer of nurturing talent and is currently actively promoting his "grown your own player" kit, just take 2 seeds, plant in a tub of top soil, water every day, and hey presto you will have grown something which can play football just as well as Neil McFarlane or Dave McPherson or Pasquale Bruno.

The Loyal Lithuanian supporters, known throughout the world as 'Gunts', are generally gullible in nature being led to believe many impossibilities, such as Farts ability to be the best team in Europe or that they actually won 22 games in a row.

It has often been stated that of the Edinburgh teams, Farts have the more affluent support, however this was a spelling mistake from a Royal Navy recruitment poster from 1913 and was meant to read 'effluent'. This is part of the reason for playing in maroon, or as it is locally known 'bloodshite red'.

The support has long been known as the ugliest supporters on the planet, modelling their looks on such famous people as John Merrick, Roy "Rocky Dennis and Quasimodo. Along line in ugly players followed, Stevie "You'll never win the pools wi' a coupon like that" Fulton and Henry Smith being the ultras.

The supporters are well known for wearing their togas day in day out, with a veritable myriad of stains and spillages they can be seen sporting them just about anywhere apart from a football game. It is usual for them to wear them to weddings, christenings and job interviews as the bloodshite red colour is thought to be a "Lucky Omen" that has been responsible for their elevation to huge team with 400,000 fanatical supporters and constant silverware trips in open roofed buses.

Hearts fans are also known as "those pretendy Rangers fans" who can't afford to make their way to Ibrox Stadium. They also sport 1970s haircuts, vacant facial expressions and communicate with a series of grunts. They can regularly be seen bedecked in Union flags, singing sectarian songs.