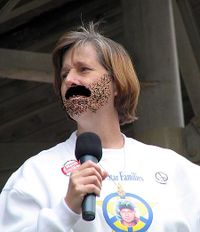 Mrs. Norris in her first inspiring speech, which she entitled "YOU WILL BLOODY LISTEN".

The married women (aka. the married mothers, 1666-present day) were formed by Mother Teresa (version 2, Christian experimental teams decided the first was too 'good') in 1340, although the group was originally only experimental there was soon a mutiny and Mother Teresa Mk2 was assassinated, the group then became a secret society in 1475 and has been 'behind the scenes' for 5 generations of the group, and still does this present day.

The origins of the married women[edit]

The married women was formed late october 1340 as an offshoot of the 'Kick You In The Nutsack' (KYITN) all women's military, originally the four leading KYITN members left their military posts to join this group, it soon became tradition that when a soldier had reached the final level of promotion, she was given an honourary retirement and invited to join the married women. As the ranks grew, the group became more and more secretive, buying up bioweapons research labs, military bases, aircraft landing spots, ice cream stalls etc. 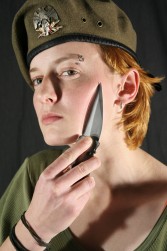 The attempted shaving of a 3rd degree married woman, shaving was supposedly to make them look manly, therefore disguising their sweetness, though it was widely thought that Mother Teresa was a messed up full bred lezzer who greatly enjoyed the 'company' of women who shaved.

The mutiny that changed the group forever happened 1867 not long after the luke warm war, the mutiny was led by the four leaders of the 3rd generation, David Gilmour, William Shatner, Harry Potter, and Queen Victoria; each armed with razor bladed rolling pins. In the night Mother Teresa was beat and stabbed to death in the night. Then each of the four leaders mysteriously died after the death of mother teresa, the deaths were later found to be the work of Senor Muchachaz, the personal hitman and bitch of the infamous Mrs. Noris.

By the end of the 18th century the group had numerous world taking overer schemes, one of which included 'the night of continuos painful neverending pain although the pain may stop for a brief period of time while we get lunch but THEN the pain will return' (AKA. the doomsday plan, although the group withdrew this name in 1967 as it was "too comic booky") this plan was widely seen as an athiests armeggedon, the plan was all those who weren't of beardian faith would be lined up and shot ... in the leg, then repetedly stamped on until they cry like little girls, in which case they were shot for being cowards...its a hard life.

The plan went down 34th August 1901 all those not of beardian faith were punished accordingly, though there was an assassination attempt on Mrs. Norris, but she been born to kill, eat men and organise political agendas caught the bullet using only her left nipple, this act has been a nominee for 'the most rock ard bitch awards'. Assassination attempt aside the plan went down reasonably well, but after three consecutive raids on a nuchlear biochemical weapons research facility the group soon realised that their leader had fallen sick and Mrs. Norris died from radiation two weeks later after having sex with a random stranger, sadly her vagina was not up to it and it melted away then the melted mix exploded.

The Married Women now being led by Gary (who happened to be a dead goldfish) found that their new mystical leader had a very promising technique at becoming known and that was killing everyone they saw, this was fine until they came across the Rowdy Saudis they fought briefly over the last chocolate cornetto, this did not go down well, all died ....on the Married Women's side...and Vince Vaughn (the leader of the group at that time, in their deadly mark II period) stamped on poor gary, this was the beginning of the end. It was at this point that Bruce Willis decided to become an eastenders star...

The group was now over, it was briefly reformed by an organ grinder named 'Jo' and his monkey 'FiFi Spectaculare' who discovered some cave paintings, but it was agreed all round that this was never the same.... and only after the group was formed did anyone realise that Jo being a married woman was not possible, on account of him being a man.... the married women version 2.0 were destroyed by critics, that is to say, they were stabbed in their beds.

The confirmed and unconfirmed members of married women[edit]