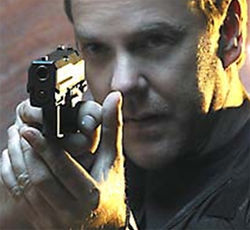 For the uncouth among us who choose lies, the so-called experts at Wikipedia have an article about Jack Bauer.

“A ‘Bauer-second’ is the smallest possible measure of time known to science. It is determined as the period of time between when Jack Bauer orders a Terrorist to, 'Get down on the ground, now!!!' - and then shoots them for disobedience!”

Throughout the history of machismo there have been many mega-bad-asses. You know some of them, like Darth Vader, Rodan, Norman Bates, Frankenstein, Jack Dempsey, King Kong, Samuel L. Mothafuckin' Jackson, Joe Pesci, Godzilla, Rambo, Superman, Chuck Norris, Bruce Lee, and even Tony Jaa. But among all super-humans, Jack Bauer is America’s most horrific terror agent. He's not even remotely an anti-terror agent, he's a pro-terror agent, plain and simple. He fights terror with horror. The only notable differences between Jack Bauer and the terrorists is that he's a "horrorist", he's way worse, and he represents truth, justice, and the American way.

Earning well over 13 million dollars per season, Jack Bauer was the highest paid television actor and millions would spend 24 long weeks just to see what Jack did in one day. Everyone's life depended on the outcome. Bauer is different than Norris or Rambo, who are all about round-house kicks, brute martial arts, using a rattle snake as a condom, 50 caliber machine guns, eating horrible things, and skill. Jack Bauer is about apologizing to his partners for rendering them unconscious, and shooting people above the knee, torturing the bad guys, also giving his word, going dark, and fighting for justice while being chased by both the good guys and the bad guys at the same time that Jack's chasing them. And Jack shits on Martial Arts and his deputy, and never eats or uses birth control. He even gets repeatedly killed and resurrected, while neither Chuck Norris nor Rambo could ever survive getting killed. Bauer Facts are really quite a distinct genre.

In this article we will only list the true, bone fide, scientifically provable, and verifiable facts. This is an incomplete list because the complete list would require more disk-storage space than the Internet can muster. 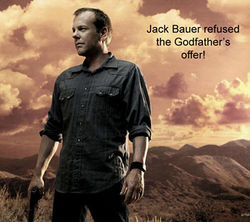 The "essential" Bauer facts have been nicely summed-up in the following quote:

“Jack Bauer can stick Martial Arts, and his deputy, up Jet Li's ass!”