HowTo:Set Up a Party at the Last Minute

You're sitting there in your chair, sipping a beer. Your wife has finally stopped yelling at you to - what was it she said - "Get off your lazy ass and do something!" Next, you manage to get off your lazy ass and do something; specifically, put batteries into the remote to prevent you from having to do such a thing again. Finally, you turn off the HGTV your wife had put on to force you out of said chair, and turned on ABC. All of a sudden, you realize something. From seeing John Madden blabbering on the TV, your lethargic mind recollects what your masculinity should have prevented you from forgetting: TODAY IS SUPER BOWL SUNDAY! As your mind races to figure out what to do, you realize why your wife has stopped bitching: she's off to pick up her family for the giant bash. This is the very same bash that you promised her that you would set up. At the time, sex seemed worth it, but now, with the time ticking away, you're not so sure. You only have three hours (what your wife could be doing for those hours is beyond you. Don't worry about that, you have bigger fish to fry). So here you are, in your boxers with not a clue as to what to do. SHIT!

To prepare yourself for what is about to come, take note of these following tips. 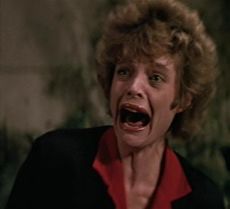 This is the opposite of not panicking.

This is the most important part of setting up a last minute celebration. You fucked up, it's already happened. There's no changing that now. Sure, your initial instinct is to sit in your chair, continue to drink until you're oblivious, and cradle your head in your hands while singing "Staying Alive," but resist this urge. Such an emasculating route will do nothing for you but accentuate your embarrassment, and you don't want that. You certainly don't want that.

Instead, you should try to curb your anxiety using some easy-to-remember tricks. For example, instead of crying, try to breathe in and out steadily while simultaneously looking at pornography or fantasizing about doing so. However, this often isn't enough, and will sometimes even make your condition worse. Should this be your situation, rigorous calisthenics will do the trick.

You're going to need to do very much driving in the coming hours, and to do this you must be as sober as possible. Also, to follow these directions carefully and correctly, you must be of the sharpest of mind. You can't screw this up, it will be your downfall. Nothing is worse for your reputation (street-cred, if you will) than setting up a lackluster party. Joe Franklin of Alabama says, "Yep. I been there. I screwed up. That's how I ended up in Alabama."

This is the least of the many cases where a man, well-meaning if extremely dense and forgetful, has lost it all (social status, marital status, and literacy) due to messing up a party. Now, most will tell you that it's impossible to set up anything good at the last minute, but that is untrue. If the effort is there, and the directions are followed, you should not fail. Now, enough preparation. Let's get to it!

Setting Up The Party

Step 1: Get The Food and Drink

Odds are, your family is gluttonous. Your friends are also likely gluttonous. Thus, the feeble foodstuffs that pervade your cabinet are not enough to tame the beast in them. Ergo, you're going to need to leave your home (which shouldn't be a problem if you followed the steps outlined above) and get food. Standard party fare should suffice, but if you're too much of an idiot to know what that is, here's a list of necessities.

That should be enough to get you started, but do not hesitate to purchase more. Better to have more than less, as they say.

Unfortunately for you and your convenience, the supermarket will not be carrying anything you need. Do not worry about this fact, simply go to the back of a Mexican restaurant after the most recent celebration (more than likely there'll be one every couple of days, as they celebrate many things down there, from donkey births to homosexual lynching) and pick up what you need.

Step 2: Get the Decorations

A party will not be good unless it is somewhat decorated. This does not require any purchase unless you wish to go above and beyond. If you choose to do the former method, then simply go into your garage and find the decorations from the previous party you had (set up by your wife, of course), cross out the holiday cheer, and write "Happy Super Bowl" or some similar phrase.

If you really want to get laid impress your guests, then you should buy the decorations anew. However, as above, you will not find anything in the place you normally would. More than likely, Party City and all of those crap stores the women of your life have dragged you to are out of stock. This, of course, means you will have to do some scrounging. Here is a list of lucrative methods that can help you get what you want:

Using all of these ways, you still may have to dig out your old stuff and write "Happy Super Bowl" on it. That's just the way it is.

Step 3: Get the Flatware 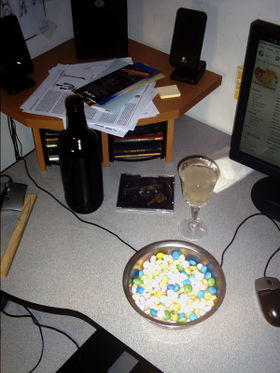 Probably what your party should look like after completion. Probably.

You probably have this in your house already (probably in triplicate, because the people that didn't know you at your wedding all got you china), so no worries here. If you don't want to dirty it/don't know where it is, then you should be ashamed for being a pussy/an idiot. However, that also cannot change, so go to plan B: napkins. Leave out millions of napkins (which can be acquired in all of the ways laid out above) and people will use them in place of plates.

You should probably have one of these too, as your wife wouldn't be stupid enough to schedule such a TV-centric party without the TV. A centric party would not go over well with her girlfriends. Doesn't it bother you that your wife has girlfriends? That would be hot if they were like actually girlfriends (and they were also hot), but it's just annoying. "I'm going out with my girlfriends" has become so annoying to hear, no? What are you, a lesbian, woman? Hey look, TV!

Here are the steps you need to do to make it spic and span:

So you're done. You've set up the party in a somewhat organized manner, and you even set up flatware (if you weren't lazy). Your wife will be very happy that you didn't screw up this time. So will your father-in-law. Now just make sure you don't get too drunk and end up streaking (again), and you'll be golden. All that's left to do now is sit back in your chair with a somewhat smirking, better-than-you expression on your face as they walk in. You can hear them now, and you permit yourself a little imagination here. They walk in, pleasantly surprised with your competency. They walk around the house, and they realize that there are no illegal Mexicans in here that are the actual brains behind the operation. Speaking of Mexican, you pick up the first beer of the night, and suddenly your eyes widen. This could be a problem, as you notice the cigarette butts in the alcohol. Uh-oh! Better luck next time, champ.