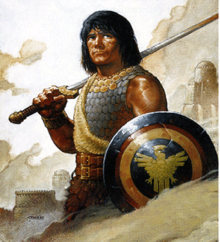 This picture must be a little inaccurate. Does he look like a barbarian?

“Hither came Conan, the Cimmerian, black-haired, sullen-eyed, sword in hand, a thief, a reaver, a slayer, with gigantic melancholies and gigantic mirth, to tread the jeweled thrones of the Earth under his sandalled feet. Hell yeah!”

Conan the Barbarian is a mighty warrior and hero. Endowed with great physical strength, a brilliant mind and a big penis, he managed to rule Earth, long before ancient civilization existed. All of his glorious (and totally real) deeds are recorded in books written by Robert E. Howard. Conan has inspired many people around the world, including Xena, Arnold Schwarzenegger, Lion-O and Kevin Sorbo.

For those without comedic tastes, the so-called experts at Wikipedia have an article very remotely related to Conan the Barbarian.

Conan was born in the Hyborian Age, a period in the past, circa Upper Paleolithic. Conan's mother had died giving birth to her big boy son, thus Conan only knew his father, a humble carpenter, named Geppetto Gonan. Conan lived a tough childhood, as he had to work, in order to gain some money. Conan grew big and strong, but smart as well. He was also illiterate and innumerate but so was 99.9% of the population then.

The Tower of the Elephant[edit]

While in a tavern, he heard of a splendid jewel kept by Yara, an evil magician, in the Tower of the Elephant. He immediately decided to steal that artifact. He took his big sword and went to this mysterious tower. On the way he met many foes, such as Al-Qaeda members and a Goth army. He killed 'em all, with no mercy.

When he finally reached at his destination, he slayed two lions in the tower gardens and then went upstairs. Upon reaching the top, Conan killed a large spider[1] in a frenzied battle. Undaunted, Conan continued on into the eldritch tower and discovered the Hindu God Ganesha, who was imprisoned by the sorcerer. Ganesha instructed Conan how to beat the magician. At the end, Conan used the supernatural powers of the jewel to shrink Yara and draw him into the jewel. Totally believable, isn't it?

While sailing somewhere, Conan was attacked by Bêlit, probably a Somali pirate. All the crew was slaughtered, but Bêlit spared the handsome Conan, in order to fullfil her insatiable sexual appetites. After many romantic moments, Bêlit revealed him that she was looking for a lost treasure. It lied in a dark jungle, guarded by hyenas and a winged monstrosity.

Sooner or later, Conan, Bêlit and her pirates, sailed up a river, encountering ancient ruins. Despite the bizarre murders of their crew and the various horrors lurking in the jungle, Bêlit and Conan still find time for their sexual romance which is alluded to by Howard as having sadomasochistic undertones. However, Bêlit was soon captivated by a cursed necklace found among the lost treasure which seemingly instilled the wearer with madness. In such a twisted mental state, Bêlit issued faulty orders. At some stage, she thought she was transformed into chicken and began to cackle. Her crew was soon decimated and Bêlit herself fell off a cliff trying to fly like an eagle. Driven to rage and now alone, Conan confronts the monster, giving it a bloody death. He finally left with the treasure.

Conan was really gifted, at least before he got old. He was very well trained and had incredible stamina, enabling him to go without sleep or food for a few years days. The Cimmerian is a talented fighter, using all kinds of weapons man has ever created. Despite his brutish appearance, Conan uses his head as well as his hands. Literally. He can hit many foes with his head and make them lose their breath.

Evidently he was the greatest man in the world, obviously just better than the average pig-fucker civilized person who lies and cheats and is a coward. Although he is a barbarian, his speech resembles that of Hamlet or Macbeth, clearly showing that barbarians are so much better than civilized people, they are born with sophisticated speech. He is in no way a wish fulfilment of the author who wants to be a super strong barbarian that can bed any woman and kill billions of people without breaking a sweat. No way.

Throughout his many adventures, Conan fought alonside other fierce warriors, no more gentle than him. We indicatively mention the following: