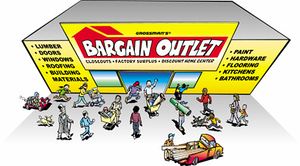 The lure of low, low prices entices a variety of people.

Hey, lets make a deal: you read this, so you don't have to read all this crap bellow.

If you see anything like the above, you may witness the hideous, life-destroying, fun thing known as a bargain. Below we will explain in full detail what is a bargain, and where to find the best bargains guaranteed to make you higher than what crack will ever do to you.

A Bargain is widely regarded as the best addictive drug out there, making you feel really good inside. Like other drugs, this feeling subsides quickly, and the only way to get that feeling is to get another good Bargain. When you get so addicted to Bargains that you do nothing except go from bargain sale to bargain sale, you are known as a Bargain Hunter. People who sell bargains but are typically secretly addicted to them themselves are called Bargain Dealers. Obscure bargain hunter paradises are known as sales.

The Dangers of Bargain Hunting[edit] 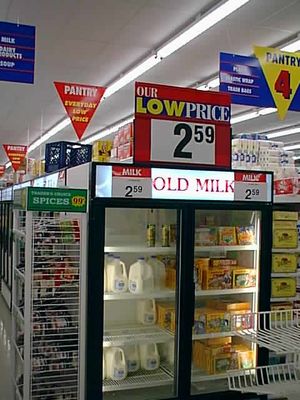 Bargain Hunting has many dangers, which you should be aware of before you get a bargain, then realise you don't give a toss and go and buy some anyway. Some common cause of bargain hunter injury include:

If the bargains are of exceptionally low quality, it may seriously hurt you. In fact, most bargain dealers only give away bargains because they are not as good as other bargains, or, in other words, suck. For example, you might by some bargain chicken, and then get bird flu. That might be because the particular bargain you bought was a piece of crap. Meh. Such is life.

Sometimes bargains aren't really bargains. They are really rip-offs in a cunning disguise. For example, a bargain hunter might be lured into a sale thinking that there are real bargains to be got, only to buy some and discover it is not the real thing. For example, many Insurance companies, offering you bargain prices and freebies, when they are really trying to get your money. This creates a feeling of depression instead of a high, and many bargain hunters turn emo or commit suicide because of this feeling. If you realise that the bargain is a scam, quietly make your way to the other side of the road, but you won't make it because you will get run over anyway. You're dead either way. Go cry in a corner.

Bargain hunters are people who just can't get enough of low, low prices. There are many charities for Bargain Hunters, because the best way to turn a bargain hunter into a normal person is to give them money. When they get money, they realise that it really isn't that special, and there is no point saving it. Many people in the world are tight arses though, so no one really wants to give the druggies any money, especially since it might be wasted on more bargains.

Bargain Dealers seem, seem, seem to think that repeating words such as Bargain, Sale, Save, Cheap etc. will make you want to buy the product. Well they are WRONG, WRONG, WRONG! What is so appealing about some guy shouting SAVE! endlessly? Will we ever know?

Why is it bargain sales always end at midnight? Are these stores ever open at midnight anyway? And if they were, who would bother to go to them at that hour just because they don't want to miss out on all the great prices? Well, the truth is that these times are so ninjas and gangstas don't miss out on all the fun. We all know these kind of people/animals don't like buying stuff, and instead prefer stealing it. If they mean 20% off all items, this includes stolen items too. Not that 20% of nothing will make you jump for joy, at least they criminals will know Wal-Mart is not as generous.

THESE PRICES HAVE BEEN SLASHED! THIS IS A MASSIVE CLEARANCE SALE! WE NEED TO CLEAR THE SHELV- Ahh, my voice. No doubt, many Bargain Dealers have severely damaged their vocal chords by doing all this shouting. And what good does it do? Shouting non-stop has proven to be a great way to make enemies, which is probably why the Bargain Dealers do it, all of them being evil and greedy when it comes to their own bargains (see 'Strategies Used by Bargain Dealers').

“These prices are at their lowest ever!”

Bargain Dealers use quotes from random people who don't exist in the hope that it will make you rush off to their store. If Harry R. said it, then it must be true! How stupid do they think we are?

This strategy is especially loved by hardware bargain dealers, who are always trying to beat each other's prices by 10%. This could come in useful when you only have five cents, because you can go from one dealer to another, each time lowering the price by 10% each time, until eventually the cost is so low it gets rounded to five cents.

Our prices are SLASHED! CUT! CHOPPED! DECAPITATED! SLASHED! Every time someone says one of these words, the dealers use Visualisations to help you understand what these prices are enduring, either ripping up the prices, cutting them up, or, most infamously, making slashing movements over them with the deadly permanent marker. The obvious disadvantage of using permanent marker is that if you were to mis-spell the word permanent permanent, you wouldn't be able to correct it without it looking obvious. If you see a bargain dealer doing horrid things to prices with permanent markers, lock your doors, shut your windows, and make sure your children don't go out at night.