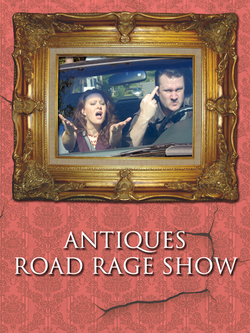 Promotional advertisement for the series.

Antiques Roadshow is a BBC television programme in which antiques dealers travel around the country, appraising antiques brought in by participants and attacking maniacs who don't know when to stop tailgating. Local people learn about treasures they have in their attics as they vow to kill those idiots who can't use a simple turn signal.

In addition to the original British version, the programme has spawned several popular international versions. The Canadian version, for instance, is co-hosted by a professor of antiquities and an irate ex-trucker who compulsively honks his horn at the car in front.

The show moves through several cities each season. Area residents bring in their possessions and have them evaluated for authenticity and value, while the dealers point out the historical and cultural significance of the objects before setting a price. After the appraisals, participants throw their heaviest antiques at the goddamn morons who can't tell when a light turns green and curse out American host Mark Wahlberg (or British presenter Michael Aspel) when he takes three centuries to merge into the right lane.

Fighting also occurs before tapings. In 1987, former series presenter Hugh Scully cut off a driver on his way into the program, and was shot with a mint-condition M1819 Hall rifle, later valued at ₤2,500. Roadshow participants Steven Wayler and Bob Anderson got into a fender bender prior to a 2006 Roadshow in Tampa, Fla. and beat each other to death with two rare Tiffany lamps. Their widows were told the lamps could fetch up to $10,000 if they had professionals repair the damage and remove the bloodstains. 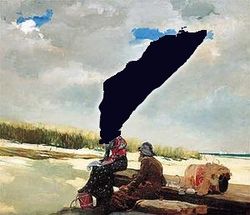 A previously unknown Winslow Homer painting, damaged because its owner doesn't know when to use the goddamn brakes.

For those without comedic tastes, the so-called experts at Wikipedia have an article about Antiques Roadshow.

Antiquarians have sharply criticised Antiques Roadshow for the "irretrievable damage" it has done to some of the world's greatest treasures, often due to petty disputes over parking spaces. Psychologists have also questioned the mental stability of appraisers and participants and voiced concern at the growing number of altercations on the program, often unrelated to the antiques themselves. A 2002 incident in Phoenix, Ariz. between appraiser David Cumberland and retired steelworker Andy Lefkowicz drew particular criticism.

Cumberland: . . .but I have never seen a baseball bat signed by all the players in the 1935 Major League All-Star Game. At auction, I would say this could easily bring in $15,000 to $20,000.
Lefkowicz: Oh -- oh my!
Cumberland: But I'll bet it's worth much more to you.
Lefkowicz: Wow! (Pauses, appears tearful) Well, thank you very much.
Cumberland: Thank you for bringing it in. You have a -- hey, you're that bastard who passed me on the right!
Lefkowicz:And you're the asshole who doesn't know where his gas pedal is!
Cumberland: Because I'm not a lunatic! (throwing table over)
Lefkowicz:You won't make it to auction, bitch!

A studio-spanning fistfight quickly erupted, resulting in the destruction of an 1803 Wedgwood jar, a Meiji-period silkscreen, several Buck Rogers rayguns and a set of forged letters tracking a correspondence between Napoleon Bonaparte and Ethel Merman.

Roadshow producers have expressed "regrets" over the destruction of antiques, but note that the popularity of Antiques Roadshow has led to scores of new art discoveries, which have a "better than 50 percent chance" of surviving a taping. Others have noted that the most heavily damaged items have been lamps, chairs, old pistols, beer bottles and any other antique that can be used as a weapon or blunt instrument.

In recent years, several cities with mass transit have asked those attending the show to take buses or trains to tapings, but participants have generally resisted, saying they prefer being the kings of their cars and ruling the road.

Despite the frequency of accidents outside Road Show events, 95 percent of participants rate their driving as "good to excellent."

The most precious item ever brought into Antiques Roadshow was a dress uniform worn by American Revolutionary War general Nathaniel Greene, valued between $600,000 and $750,000. Accountant Mark Perry, whose Victorian hobby horse was valued at ₤2,000 in 1999, holds the record for longest string of obscenities (184, directed at a grandmother who pulled right out in front of him). Housewife Susan Izzo holds two records, for the oldest items (a set of coins minted in the reign of the emperor Augustus) and most broken jaws (17).

The worst item to show up was a chair by Elmslie that was a fake. In fact, it's the only item to make it on the show that ended up being worth only $0-$500 since some idiot will likely buy it. In fact, show that idiot this episode so that he understands it's a fake, but he'll buy it anyway. He'll also back into your car while collecting it, the bastard.

Featured Article  (read another featured article)
Featured version: 20 October 2014
This article has been featured on the front page. — You can nominate your favourite articles at Uncyclopedia:VFH.