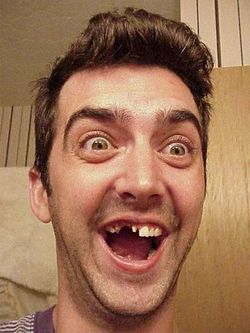 A prominent member of the anti-intellectualist community discussing his agenda with the press.

For those without comedic tastes, the so-called experts at Wikipedia have an article about Anti-intellectualism.

Anti-intellectualism, also known as anti-intelligence, anti-education-ism, and anti-knowing-stuff-ism, is a policy employed by various people and social groups, generally those of the more unsophisticated and physically expressive variety. Although its exact nature and degree is known to vary, the generally accepted definition of it is ‘vehement opposition to any activity that requires more than two brain cells and the expressiveness of a drunken rhinoceros’. Anti-intellectualists often see themselves as heroes of the common people, specifically the rapists, serial killers, alcoholics and wife-beaters. The anti-intellectualist movement has had several significant representatives and played several prominent roles in history-though, as of yet, never in a way that has not caused a war, massacre, economic crash, ethnic conflict, or the spilling of someone’s glass of water.

The exact principles of anti-intellectualism fluctuate depending on their implementers, but their essence is generally agreed to be strong opposition to the ‘academic elite’, which, in the words of one anti-intellectualist, entails "anyone who can add two and two, find Iraq on a map, read anything other than Ann Rice, and hear the word 'scientific progress' without bursting into fits and screaming in a clearly limited vocabulary about global moral decay."

One of the motivations most often cited for anti-intellectualism is the belief that excessive knowledge causes depression. In 2002, Michael Behe, giving a lecture at the Creation Museum, stated that he had recently discovered irrefutable evidence that intellectualism also caused skin diseases, sexual dysfunction, STDs, leukaemia, smallpox, anal cancer, and common head colds. When a member of the audience asked if he was planning to present his research to prove these claims, Behe paused a moment, then pointed at the questioner and shouted ‘intellectual!’ The listening crowd promptly turned into a mob, and the questioner was thrown out of the museum to jeers about ‘how the wife felt about the floppy problem.’

The psychological effects of the Middle Ages' anti-intellectualism on the common people were, at times, quite detremental.

Although, no doubt, having made some sort of cameo earlier in history, anti-intellectualism’s first measurable manifestation came about in the time of the monarchies of Medieval Europe. The implementation of anti-intellectualism was a necessity for these monarchies, for fear that the serving masses might become educated, learn to have an independent mind that functioned beyond deciding whether to have maggoty dog corpse or horse manure for dinner, and, consequently, come to the ultimate realisation that the fact they had no say in being run by a collection of broad-waisted aristocrats who took pride in being inbred might be a little less than the best gig available. Of course, with the army and the church under their thumb, this was no great feat for the monarchies; the church scared the pointless peasants away from seeking anything that looked marginally like base-level rationality, whilst any university or academic group coming too close to saying anything like ‘Yeah…there might just be this teensy-weensy little thing wrong with, you know, our, like, social structure, and stuff…’ was promptly burned down by the army, who roasted and ate all the leather bindings on the books and raped any academic that wasn’t dying from arthritis.

Perhaps the anti-intellectualist sentiments prominent amongst the rather odd fellows who headed the puritan movement of the later years of history are best embodied in renowned puritan John Milton’s poem On His Dumbness:

“When I consider how my lateral thinking ability is spend/ere half my days in this intellectualist world and wide/I celebrate by dancing naked on my writing desk/’cause I’m so damn happy in my blissful ignorance/and will ensure that this poem don’t rhyme or maintain any sort of metre/as that would be cultured and almost intellectual.”

In addition, it is often reported that the following Bible passage was a favourite amongst puritans as a reinforcement of their views on intellectualism (the passage’s chapter and verse are unknown, and some believe that the fact that it has never been found in the Bible in the past few centuries might indicate that the Bible is slightly less than watertight in its reliability):

Several centuries later, anti-intellectualism had another host in the form of mid-20th century Soviet Russia. Education amongst their citizens was something the Communist leaders went to great lengths to avoid, for one particular reason: when one considered the appalling taste in architecture, the posters of ugly guys with moustaches everywhere, and the widespread shortage of wall paint, not to mention the rather unstable chaps in government to boot, there ultimately remained only one reason to be proud of being Russian: Vodka. The fear of the Communist leaders was that, should the population become educated, they could well learn of the world’s wide offering of fine wines and spirits-and, consequently, realise how absolutely bloody awful Vodka was by comparison. This, no doubt, would lead to nationwide lack of patriotism-which, as Stalin is quoted as having said, ‘would be, liek, oh teh noes!’ Or something like that. Anyway, the Soviet Union’s primary means of preventing education were, completely unpredictably, propaganda; such phrases as ‘Knowledge: A capitalist invention of no use to the honest working man’, ‘Ignorance all day somehow keeps the capitalists away’, ‘Only piggy consumerists know stuff’, and (to incite book burnings) ‘Burn all books that don’t have boring titles and don’t completely patronise the low-income man with hollow words and fiddled statistics!’

Anti-intellectualism made yet another appearance during the legendary Swingin’ Sixties; rebellious youth would maintain a mutual spirit of anti-intellectualism in various ways, such as dressing in a way that showed no sort of intelligence regarding appearance (as well as possible colour-blindness), and through such popular slogans as ‘Make buttsecks, not education’, ‘Don’t trust anyone over thirty, especially if they went to school, have a degree, or look like they earn their own money somewhere other than a dodgy street corner’, ‘Intellectualists are being paid by the corporations to lie to you about the effects of weed’, and ‘Avoid intellectualists lest they make you realise the hypocrisy of your status’. These slogans were made popular via graffiti, but due to their annoying length needed considerable amounts of wall; they were thus scrawled across Academic Honours Boards in High Schools across the world to effectively emphasise their message. 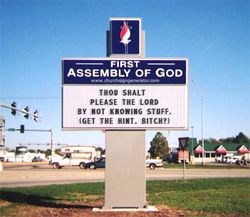 Anti-intellectualism, though a historical and aged philosophy, has managed to carry itself through to modern times while maintaining all the passionate support that allowed it to stand out brightly within world politics throughout the twentieth century. The left wing of today daily embodies it with everything from the antics of environmentalist extremists with a habit of never eating meat and throwing bricks and fur-clothing factories whilst utilising anti-intellectualism to maintain the illusion that this is actually doing something for the environment, to the anarchist who has the anti-intellectualist idea that complete absence of law, order, morals or ethics is the only way to make everyone happy. Meanwhile, the prominence of various right wing figures illustrate an unwritten but harshly strict rule among the modern right wing: if it knows stuff, we don’t want it. Perhaps the right wing’s anti-intellectualist sentiments can be best represented by the definition of intellectualism found within the ever-reliable Conservapedia:

"Intellectualism is a state of mind that is misleadingly portrayed as positive by the representatives of a mass liberal conspiracy to breed worldwide anarchy and close down McDonalds forever. However, most political analysts (totally not just the ones with fascist sympathies) agree that the beneficial effects of intellectualism have been minimal at best, and far outweighed by its degenerative effects; it is generally agreed that it is due to intellectualism that there are people in this world who don’t blindly submit to every last bizarre pre-civilization philosophy in the Bible and do not believe that the world was created a couple thousand years ago out of cosmic dust and God Glue. We’re also pretty sure that the Holocaust, The First World War, Pol Pot and Adam Sandler were caused by intellectualism. Since there is not a shred of evidence to indicate that this belief is true, it is clear that God does not want us to find the evidence and simply wants us to believe it out of faith. So there."

However, modern anti-intellectualism does by no means necessarily confine itself to political efforts; in high schools and universities throughout the privileged world, anti-intellectualism breeds like fungi-its sustenance being the teenage mind. By numerous accounts, in almost every university lecture room and high school classroom throughout the first world, there is to be found at least one young adult who has devoted his or her life to, with every fibre of his/her being, avoid any sort of learning whatsoever, and numerous beliefs (based, of course, on no empirical evidence) have flourished in high schools, such as that the only way to be loved is to puke constantly and look like a Holocaust victim, that being able to throw a ball around will get you further in life than any sort of degree, and that sex as early as possible is the quickest path to happiness. It should be noted, in addition, that this last belief is heavily supported by the anti-intellectualist right wing’s viewpoint that complete absence of sexual education is the best and only path to complete sexual understanding and morality, lending weight to the theory of a mysterious third force of anti-intellectualism conspiring to dominate the world.

Atheists posting on YouTube and debate forums from basements claim religion is an anti-intellectual institution despite the fact that they themselves are a religion, just one made up of arrogant hypocrits and lacking anything interesting associated with cool religions. 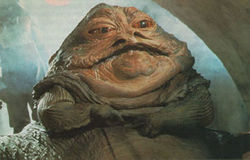 Social scientist George Lucas's artistic impression of an average human being after several centuries of living under an anti-intellecutalist culture.

Several predictions have been made about the popular view on intellectualism in the near and distant future. Such predictions have in most cases been in the form of high-budget sci-fi films that, rather confusingly, depict the future world as one intelligent enough to have created overly elaborate space stations and clone armies of generic, personality-free people who think nothing of constantly dying in the name of senseless and futile efforts, yet at the same time a world wherein the universal philosophy is entirely black-and-white and everyone seems incapable of doing anything other than blowing stuff up and joining nutty pseudo-religious cults. Such an outlook has delighted overweight Americans across the world, but for everyone else this is pretty damn nihilistic.

But you can’t please everyone.