My name is Jared I am a male. Alot of people think I am female because my screename has Eva in it, but it is actually supposed to be a reference to Neon Genesis Evangelion. I realize it was a poor choice for a screename, bur it is too late ro change it now.

I edited Uncyc alot in 2005 on when it was a much smaller community. (Back in the good old days.) I took a break from it to focus more on school because I wanted to do better & then forgot about Uncyclopedia for awhile. I am not attending the University of Texas (hook 'em \m/)& have resumed editing after a long break.

Stuff I do when I should be studying. Since I am not that good at writing articles I spend alot of my time on Uncyclopedia doing mundane, repetetive busywork.

I pwn F@h, I am currently ranked fifth for contributions with a score over 60,000 & more than 300 work units. Hooray!

Sending bad articles to their eventual doom makes me feel better about my own badly written articles.

It's as easy as the The Uncyclopedia drinking game, just click random page over & over & if I come across a stubby article that is unmarked, I stub it. (As long as it isn't a page like Brevity or something of course.)

I am a bit OCD about how I format articles. However, I usually try not to push my OCDs onto other peoples article, with topic bolding being the one exception. Usually the first sentence of an article refers to what that article is about, and the actual article name is supposed to be bolded & if it isn't I will usually take the time to bold it myself.

Where I Can Be Found on the Web[edit]

No really, I have actually earned some awards on Uncyclopedia.

My nerd image was featured on the front page, but it wasn't the featured image. Nonetheless, I am still proud. 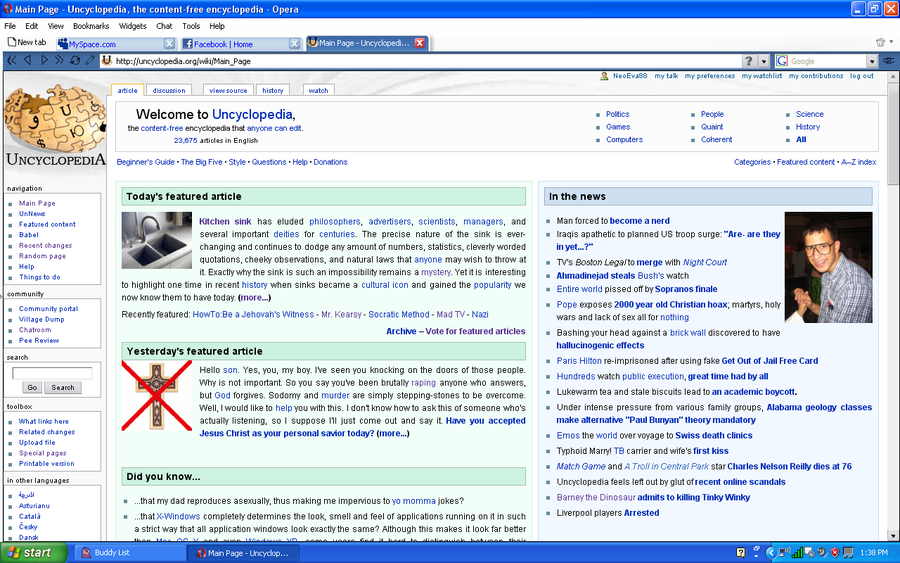