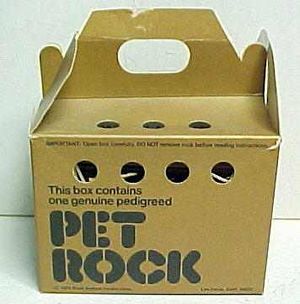 This is an original photo of the Holy Rock as a Pet Rock in a mint condition, unopened package. Some have said this can't be proven since the photo doesn't show what's inside the package. These people will rot in hell.

The Holy Rock is a legendary rock that has lived for millions of years and seen more things than any other human in existence. In fact, if the Holy Rock could talk, it would deserve to be quoted even more often than Oscar Wilde!!

The Holy Rock was not always the respected divinity on the bottom rung of the The Christio-Religio Ladderal Hiearchy that it is now. The Holy Rock started off it's life at the beginning of time. The 8 continents had all combined into one big continent, Pangea, however, the landmass could not be stable since eight is neither divisible by three, nor is it three. The eight continents thought they could fool the laws of physics because an 8 kinda looks like a 3 if you don't look very closely. The continents were wrong though and they soon divided. In this dividing process the Holy Rock was first born.

Breaking off of Africa and South America as they split, the Holy Rock fell into the ocean and spent the first five years of its life at the bottom of the ocean under high pressure. Eventually, a current swept the Holy Rock off the bottom of the ocean and it washed ashore onto a snowy beach in California. There it got acquainted with some of the other rocks on the beach and developed a hatred for sand (a predjeduce that would shape the rest of its life). Once it was even packed into a snowball and thrown at somebody's face. The Holy Rock managed to break the kids glasses, something it is proud of to this day.

Life As a Pet Rock[edit]

The first owner of the Holy Rock in its career as a pet rock was none other than Franz Kafka, the first emo. With his Chuck Taylors, Buddy Holly glasses, and incessant whining, Franz Kafka gave the Holy Rock a deep insight into human nature, especially the part of it that writes really bad emo poetry.

Later, Franz Kafka needed money to fix his Buddy Holly glasses, so he sold the Holy Rock at an auction for $500. We know very little about the buyer, except that he was King Henry VIII of England, the world's leading pet rock collector. The Holy Rock never made it to Henry though. Max Brod, who was supposed to be in charge of both delivering the rock and burning all of Kafka's writing, failed at both.

In the early year 2009, the Holy Rock was found in the Southern American Wilderness by Kiki, the infamous Prophet of the Holy Rock. He speaks it's word and spreads the joy of His life while He commands His followers on His thrown at the Holy Creek. Many have come to seek out the powers of the His Holiness but have failed by unwillingness to comprehend its unlimited powers.

In this forest occurred a most decisive moment in Holy Rock's life, it was found in the wilderness by two twin sisters. (The Holy Ghost and the Holy Spirit.) Apparently they needed a third member to complete the team they were assembling, and no mere mortal would do. The blessed the Holy Rock giving it powers of extra-fast flight when thrown, and then dubbed it "the Holy Rock." The name by which it is now known, in case you dumbys hadn't noticed.