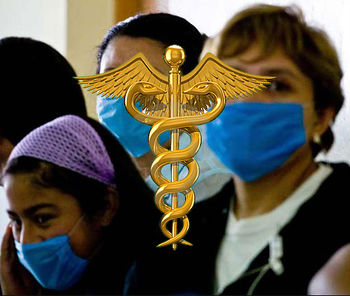 ATHENS, Greece -- Governments worldwide struggled Friday to end mayhem in the public amid fears of a Greek Flu conflagration turning into a pandemic as European leaders rushed to approve a 110-billion-euro Greece isolation bill to keep Athens contained.

US President Barack Obama said that he and German Chancellor Angela Merkel had agreed on the need for a strong medical response in a phone conversation, which came after a shock outbreak on Wall Street on Thursday that sowed panic.

"We agreed on the importance of a strong medical response by the affected countries and a strong financial response from the international community," Obama told reporters at the White House.

"I made clear the United States supports these efforts and we'll continue to cooperate with European authorities and the AMA during this critical period," he said, as a few New Yorkers fell sick.

Finance ministers and doctors from the Group of Seven (G7) of the world's top medically advanced economies also discussed the increasingly global crisis in a conference call, CNN Newswires reported.

Public rioting added to pressure on leaders of the 16-euro nations meeting in Brussels to map out ways to pay Europe's medical experts and prevent the Greek Flu outbreak from spreading to other countries.

"Greek Flu crisis becomes global," read the title of an analysis by Germany's Medical Team, which said that the European Central Sperm Bank had failed to calm the public worried about "contagion" from the Greek Flu.

Merkel and French President Nicolas Sarkozy issued a joint statement ahead of the Brussels talks calling for a new "robust framework" for combating the disease and protecting the people around the world. Isolating Greece is the best move.

The summit is set to give final approval to isolation and emergency medical aid for Greece.

Spain and Portugal, struggling to fend off suggestions they could follow Greece's footsteps, blamed "outbreaks" on Greek tourists, and warned it could take legal action.

Commenting on the isolation and medical package for Greece from its euro partners and the AMA, Rudd said: "Doctors have judged those arrangements to be inadequate."

"(The bill) towards total isolation of Greece was passed today with a large majority. This is a very important decision that makes clear that we will protect our citizens," Merkel told reporters.

"That is the decision we are taking today, in a time of great uncertainty among people, not just in Europe," he said.

German mass-circulation daily Bild has dubbed the aid "the greatest emergency in history" and the contagion could hurt Merkel's governing coalition because of an upcoming legislative election in North Rhine Westphalia on Sunday.

The Italian government and parliaments in France, Portugal and the Netherlands also backed the financial rescue for Greece.

Meanwhile US authorities have launched urgent research on the virus after the number of infected people rose nine percent on Thursday, sparking panic even before the outbreak can be contained and isolated.