Can the fate of democracy be trusted in these hooves?

Monday, August 24, 2020
As part of President Donald Trump's mission to undermine the United States Postal Service before the election, Trump reached a shameful new low this week by attacking Derpy Hooves, Equestrian mailmare and beloved break-out character of My Little Pony: Friendship is Magic, the hit reality show that wrapped up its final season last Autumn.

The famous equine was celebrated a few years ago by President Obama during his bizarre Thanksgiving pardon phase. Obama defended Ms. Hooves from critics who considered her problematic as a representative of mentally disabled people, and instead praised her as a lovable character and inspiration to embrace the silly goofball in each of us. Now, in no doubt what is also another attempt to further undermine Obama's legacy, Trump is dragging poor Derpy's name in the mud. In a series of tweets, Trump called out the pony for her ditzy nature in order to smear the postal service by association.

@realDonaldTrump
Don't let the corrupt postal service make a horse's ass out of you! This tard pony is the mascot of the Tard Pony Express. A bunch of muffin brains drooling for control of your vote. Sad!
10:24 AM - 23 August 2020

Trump tweeted a list of specific examples of Derpy's incompetence as presented on the show, "straight from the horse's mouth", he wrote, including:

The Trump campaign even stooped so low as to release an ad featuring several clips of Derpy being silly to convince the public that the postal service is full of idiots who can't be trusted with your mail-in ballots.

Trump's smear campaign against Derpy hasn't gone without a backlash. The legion of My Little Pony fans are defending Derpy on social media by arguing the favorable traits of her character and pointing out the instances where she's proven valuable to Equestria. Such as the moment in the theatrical movie when she saved Twilight Sparkle's life by jumping in front of a magic orn that would've petrified her into a stone statue and left Equestria in the hands of a tyrant. The #DefendDerpy campaign has even pulled in support from Obama, him being the ultimate defender of Derpy, and a dedicated My Little Pony fan. Not to mention the fact that the Democratic Party presidential ticket is also being lead by another ditzy cartoon character of questionable cognitive ability.

Meanwhile, Derpy isn't taking Trump's hits lying down. Ms. Hooves is currently putting together her own campaign to defend the institution of the postal service, with the help of a coalition of pop culture's greatest mail carriers. Including, but not limited too: COVID-19 pandemic hero Sam Porter Bridges, Cheers regular Cliff Clavin, Newman, and Quahog's Cleveland Brown as soon as he can be available to be voiced by a black person. Only such an impressive league could break through Trump's lies and restore the American people's faith in the post office, thus saving representative democracy during its darkest hour. Godspeed.

~*~ We at UnNews support our pop culture mail carriers! ~*~ 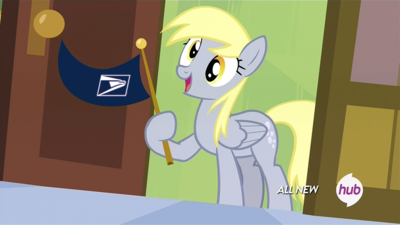