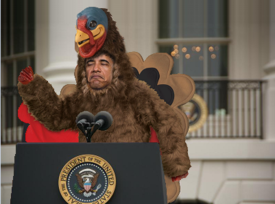 Thanks for the memories.

WASHINGTON D.C -- As part of the ongoing effort to cancel Thanksgiving, President Obama has decided to end his annual tradition of pardoning bollocks. For several years, the President extended the once beloved Presidential Thanksgiving turkey pardon to increasingly absurd things, from pop stars, to cartoon characters, to fandoms that flirt around with zoophilia a little too much. With two months left in office and one foot already out the door, Barack Obama took the final frontier and pardoned the last crazy thing that needed pardoning: The pardon itself.

Speaking on the White House front lawn, a clearly sad President Obama gave his final Turkey's Eve address. Critics say it was eloquent and thoughtful, even as Obama listed off nonsense that sounds like the incoherent ramblings of someone with Alzheimer's:

"Hey, buddy. Just popping out of the oven again to remind you that Trumpsgiving™ is going to be the greatest thing to ever rock your tits."

Obama wept, for there were no more worlds to conquer. He continued by finally giving a much requested rationale for his bizarre pardons:

Holding back the tears, the President finished...

Then, as if for old time's sake, President Obama topped off his heartfelt address by putting on his turkey fursuit one last time, danced around like a jackass and gobbled from the top of his lungs. Citizens at the event would refer to it as "painful" but "in a sad way" and "sad" in "so many ways".

Though Obama's tradition of pardoning absurd things seemed random to the majority of confused Americans, conspiracies floated around for years that Obama had ties to some Horse Fetish cabal. The evidence comes from the pattern to which he pardoned things. One year it was the new Furby, as if he had been directly paid to promote Hasbro's hot new toy. Several years later he pardoned Derpy Hooves, a background character from the cartoon based on Hasbro's own similarly rebooted nostalgia property My Little Pony. But before he even pardoned the retarded little horse, he infamously spoke out on behalf of the oppressed furry community, which is considered by many to be the creepy uncle of the slightly creepier young "brony" fandom. Finally, as if to wrap it all up in a nice bow, President Obama was on record for pardoning the Kentucky Derby, calling the equestrian event "decadent and depraved". Which was really saying something coming from the man who defended yiffing to 300 million people. 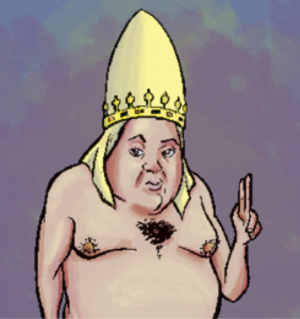 The Naked Pope probably played a role in this as well.

All these years conspiracy theorists speculated on this tangled web. Perhaps Obama was simply a furry/brony with a special enthusiasm for horses? He clearly used the presidential pardon to express some repressed urges. However, cynics would often point out the Furby pardon and the Hasbro connection. Do furries even like Furbies? They're not really anthropomorphic, nor do they even represent a real animal. Just how depraved are Obama's fantasies?

The answer would come from Wikileaks, who published documentation earlier this year proving that Obama had indeed excepted money from Hasbro, as well as several donations from furry rights lobbies and the Horse Liberation Front. Wikileaks also revealed a secret account Obama had at FurAffinity, Kimba69, as well as dozens of private emails sent to and from Hillary Clinton discussing My Little Pony episodes. This at least proves President Obama believes in these causes and is not simply a puppet of the Fur Industrial Complex.

Whether or not these revelations will leave a mark on the first African-American President's legacy is ultimately up for history to decide. At least we can all be thankful that we'll soon have a normal, respectful president that isn't so laughable.