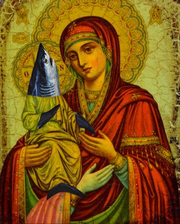 An artist's depiction of the Holy Child.

Nyíregyháza, hUNGARY -- Recently a shark in a Hungarian aquarium gave birth to a healthy young pup. What makes this particular birth astounding is the fact that she's never mated with another shark. Indeed, the staff have confirmed that she has never so much as been around another male, nor been artificially inseminated. Theologians from across the globe have concluded that this virgin birth is the incarnation of Christ himself, or at least a sign of the Second Coming.

Many travelers from across the world are coming to witness the baby shark, some bearing gifts of squid, mackerel, and anchovy fish. A number of pilgrims have began performing rituals, such as baptism in the tank[1] or dabbing shark meat on the wafer during Communion.

Not everyone, however, is as enthusiastic about the birth. Reporters asked 19-year-old David Clements from London how he felt. "Oh, yeah, rebirth of our Lord and all that. It's, you know, great. It would've been nice if he'd been human, though. That kinda sucks." When asked if it were possible that pup could only be the messiah for sea creatures, he responded, "That's just crazy. Animals don't have souls. Uh, well, except for this one, I suppose."

Others believe the shark to be in reality the foretold Anti-Christ. Sharks have the common reputation of being bloodthirsty monsters, taking human lives rather than saving them. Televangelist Pat Robertson warned his viewers, "We must keep an eye out. That ol' devil is a tricky one! Who's to say he wouldn't embody a shark?" He continued, "After all, snakes and sharks are both lizards."

The new truck magnet of Christianity.

Marine biologists are tying to come up with their own explanation for the event. The most common theory is something called 'parthenogenesis', which is a form of asexual reproduction. "Those foolish scientists are so blinded," exclaimed a preacher at the aquarium. "Can't they see this is a miracle!"

Whether not this is an actual genuine miracle was never confirmed. Pope Benedict XVI flew in from the Vatican to give his analysis. Upon standing on the ladder trying to lure the pup, he fell into the tank and was brutally eaten alive by the mother shark. "Praise be to God," cried Bishop Douglass. "The Blessed Mother has taken the Father home!" It was decided that the baby shark would then take his rightful place as head of the Church.