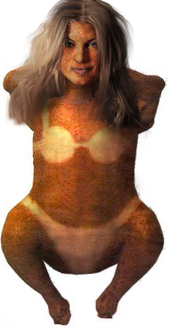 WASHINGTON, D.C. -- On this morning before Thanksgiving, President Barack Obama pardoned singer and actress Stacy "Fergie" Ferguson, best known as the female vocalist of the Black Eyed Peas, for the new annual tradition of acknowledging trendy pop singers that serve as a waste of oxygen and forgiving them of their harmless failings. The overall purpose of this jokeless roast is uncertain. It might be some allegorial tribute to the Jesus story, but one would think it would occur on Good Friday rather than Thanksgiving if that were the case. Of course, holiday customs are typically alogical. Take painting Easter eggs. What cucumber fucker came up with that? This reporter is getting off track.

A small ceremony took place at the White House in which the Black Eyed Peas were obligated to perform singles from their new album to be released Tuesday, The Beginning, due to the fact that the Obama Administration and BEP are both owned by corporations with multiethnic fetishes. After the advertisement, er, mini-concert, the President came out and gave the official presidential pardon to Fergie.

The event concluded with a surprise performance of "Don't Phunk With My Heart" by President Obama, Vice President Joe Biden, Senate Majority Leader Harry Reid and Speaker of the House Nancy Pelosi. It was at this point Barack Obama's popularity with female suburban youth and late night comedians rose, while his popularity with the African-American community and old people dropped like an anchor. The President was later quoted by White House aides as saying, "I haven't been this embarrassed since Biden accidentally called me a jigaboo on CNN."

As the custom is to only pardon one inane pop star, Lady Gaga, Lindsay Lohan, the Jonas Brothers, Miley Cyrus, Ke$ha, Justin Bieber and the entire cast of Glee will all celebrate the holiday at the slaughterhouse. 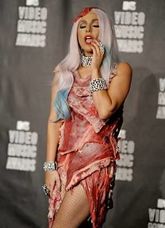 Lady Gaga insists on wearing this outfit one last time. She only dresses appropriately for gay rights rallies and when she's about to be violently murdered.