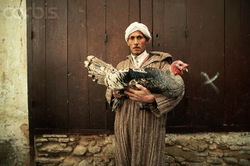 MOUNT VERNON, Virginia -- Following President Obama's pardon of two Turks yesterday, a shocking message was discovered written on the cell wall of the now-pardoned ar-Rʼiysyh Khera. Officials at Washington D.C.'s Department of Corrections discovered the message during an overnight shakedown.

The District of Columbia Department of Corrections (DOC) Director Derren Brown stated in a press release, "It would appear Mister ar-Riysyh Khera scribbled a note on his cell wall before being taken to the White House Rose Garden in which he says, 'Haha! Now that I'm free, nobody can stop me! Mwhahahaha! Now here is my terrorist plan, excruciatingly detailed, written so that everyone may tremble in fear: Step 1. Hijack plane. Step 2. Sit in pilot's seat. Step 3. Put on my seatbelt. Step 4: Listen to Men At Work's hit song Overkill. Step 5. Crash plane into th-.'"

"The note ends there," stated the distressed director, his once confident voice now weak and trembling. "Because he and fellow Turk Bahl-Sahk Tibaghar were fully pardoned on any criminal acts, including any threat of terrorism, we are unable to arrest either of them right now."

When questioned whose blood the message was written in, Director Brown said, "Oh nobody important. Just Carrot Top. He was in jail for sucking!"

The TSA stated that they did not randomly select either Khera or Tibaghar for extra screening as they boarded their connecting flight from Chicago to Mount Vernon. "Well, we are only supposed to screen 5% of passengers and frankly there were a few college girls that John and I wanted to feel up - I mean - to perform the necessary ," said senior TSA screener Megan Griffin.

Radio transmission with Delta Airline Flight 114, the passenger plane Khera and Tibaghar are believed to have boarded, was mysteriously lost approximately thirty minutes ago. However, the FAA says the plane does not appear to have deviated from it's course.

"We have no idea what is going on up there," an FAA official elucidated to the media. "And there ain't crap that we can do since any threat they made was done before they were pardoned of any crime. Looks like we'll have to wait and see... But it isn't on my head when that crazy Muslim does a sharp turn and flies to New York City and crashes the plane into the Statue of Liberty. I fucking quit!"