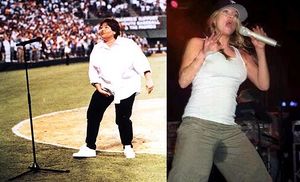 At least she didn't do anything weird with her crotch. Things can always be worse, since we as country have no rock bottom.

WASHINGTON D.C. -- President Donald Trump has signed an executive order calling for the death of singer Fergie after an embarrassingly bad rendition of The Star-Spangled Banner at Sunday night's NBA All-Star game. Fergie was given a presidential pardon by Barack Obama back in 2010 as a symbolic gesture to represent the change he was bringing to America, the first of many wacky Thanksgiving pardons. Ultimately, the tradition was discontinued in 2016 when Obama realized that the election of Donald Trump had proven his efforts a failure. Now in the current year, Trump is actively reversing that initial pardon as part of his own mission to dismantle Obama's legacy.

Calling Fergie's performance "an insult to the national anthem and all things this great country represents", Trump signed an executive order Tuesday morning sentencing the pop singer to death. The order was challenged by the ACLU, but the Supreme Court ruled to uphold it, as the landmark case of Goodman vs. Barr decided that while the Constitution protects free speech, it does not protect shit singing. While the ethics of the order has not been without further controversy, Trump apparently has an unlikely ally in quarterback and civil rights activist Colin Kaepernick, who cites Fergie's stint with the Black Eyed Peas as an affront to black musicians and their struggles.

Fergie's execution date is set for early March, when she will be sent to one of the nation's top notch slaughterhouses to be butchered as badly as she butchered the national anthem.