UnNews would be a sad excuse for a news agency if we didn't have Editorials and a feedback column. Our Janitors Closet is a forum for the intelligentsia among UnNews readers, a place to piss and moan, or to praise us for our outstanding critical thinking skills as journalists. Letters may even be answered in the event an editor can found who cares. For those of you who don't remember newspapers, OpEd is short for Opinion Editorial.[1][2] 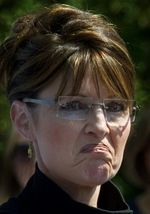 Hi Uncyclopedia, I appreciate speaking directly to you, the people who voted for me in 2008, against that hope-y, change-y guy. People who know me know that besides faith and family and my rifle, there's nothing more important to me than my loyal supporters.

As I sit here on this resplendent Alaska morning, the smell of a freshly baked pie wafting delicately beneath my nose, I am reminded by that wholesome aroma of the hope and perseverance that is the American spirit. But, today, I have a less pleasant subject to talk about. Today, I want to talk to you about the lame-stream media.

After his prayer, Ahmed beckons us to follow. We walk with him to the outskirts of his home village, Uitgeest, and away from the village in the refreshing desert sun of central Sahara. We soon reach a large valley full of peaceful lizards. "This is Skeenfleent Valley. Those lizards are all Cuckenfleisch, giant varans. They are all we have for food." I look around the valley, and slowly the weight of it all lands upon me: if the lizards die, these people will die too. And there is no way to prevent the lizards from dying. A cold fate is in store for the village. more...

UnNews Editorial: When will Obama fight back against Monster Truck attacks?

Barack Obama has been President for one week now, and the UnEditorial Board of UnNews is deeply troubled by the 44th Presidents lack of urgency in addressing the matter of attacka on Americans by Monster Trucks.

In the last week, two Americans have lost their lives in senseless Monster Truck Attacks.

These attacks have happened without provocation.

In one attack, a harmless child-spectator died when the Monster truck refused to obey its human master. The truck lurched into the grand stands, to feed on the body of a Colorado boy who was doing nothing but enjoying the show. His father, who was enjoying a box of popcorn witnessed the carnage. He is now a patient in a theraputic community. more...

UnNews ATBF Column - Do not feature this article!

I know you want to, but just don't. There's no point to it. It's a waste of bits, a pathetic attempt by the author to garner praise and adulation for his questionable "talent" as a writer. You'll only encourage him to write more, and if there's one thing we don't need around Uncyclopedia, it's any more of that.

Send a message to this dick. Tell him his idea of humor is slightly more evolved than belch language. Oh, sure, he throws in the occasional thesaurus-derived phrase in to make us think, "oh isn't he just so erudite!". Don't fall for any of it.

Fine. If you're going to keep reading, I may as well keep writing. more...

Dear Chief Janitorial Editor,
I have written an series of articles about the Illuminati, submitted it to UnNews, and then they seem to disappear. I can find no records that the articles ever existed. I suspect some sort of virus has invaded my computer and deleted the backed-up copies of my articles as well, but cannot as yet, prove it. A little help here?

Let me begin by saying you've got some sweet ass. We mean that in the nicest possible way. Really! When we see that tight butt, we always say, "I'd follow that ass to hell for a piece" We know this because there's a camera behind you. In fact, there are 7 cameras dispersed about the room, giving us pretty much a 360 view. That is because we're piggybacking on the Illuminati computer network. They don't even suspect we're doing it. They're pretty stupid.

Don't fret about your lost articles. We have recovered them from deletion by the Trilateral Commision, who operate at the behest of the Illuminati, and will publish them when the Cabal sees fit we feel it will make the strongest impact as journalism.

Yours in cleanliness and sanitation,

Dear Chief Janitorial Editor, Uncyclopedia et al.
So, who cares if I don't return. I'll make this short. I have nothing funny to add or to write about anymore. Don't be e-mailing me or looking for me online because all I will do is just plain fuckin' ignoring you little shits! Anyway, have fun insulting one another & pissing on any article you wish to change. I won't be around nor will I ever be coming back to this site. I'm through, I'm done, & I'm outta here!!!!!!

See ya around, trolls!
JGordon

As always, delighted to hear from a complete and utter douche bag. I am particularly pleased that you want us to leave you alone, in compliance with Uncyclopedia Rule 88, Section 3 How To Get On With Life, which reads, "In the event that a user decides to become an UnUser, just bloody well leave the mewling little git alone." No one is quite sure what that means, or if it indeed exists.

If you don't like it, you can sit on my lap face down, blow me, suck the free end of my throbbing member, et cetera, etcetera.

I never divulge my marital status, as I find it counters my efforts to get laid more. As for your sister, I would like to know more about your offer. As fate would have it, I've been considering starting a dairy farm in my back yard. I also plan to grow much of my own cattle feed. I am in a position to offer a modest sum for a long-term lease of contract labor.

Being ignorant of the oil trade jargon, I wonder, is "vagin" a technical term associated with oil drilling? And, if so, are you making veiled references to some sort of sexual act or acts? Because, if this is so, I am at a complete loss as to what exactly you are talking about, and whether it's good or bad. Please elaborate. You can use the same e-mail address to send photos, terms and a brief resume and list of acceptable sex acts, with and without barn animals. Cheers!

Yours in cleanliness and sanitation,

Dear Chief Janitorial Editor,
Why are you such a Nazi fuck? You're like Mussolini, telling everybody to shot the fuck up. I hate you. You suck. You can't tell me what to do.

I've been inspired to write an article about a twat who invokes Godwin's Law, without having a clue as to it's meaning. Oh, wait... that's you! Invoking Reductio ad Hitlerum as a way to bolster your argument makes you look like an idiot [1]. You're obviously one of those self-important, mewling douche bags trying to pass as insightful and above the judgment of others. We're on to you, buddy. This is a community, dickbag. Disrespecting admins, like disrespecting anybody in general, will ultimately make you the loser. The only real difference, as far as you should be concerned, is that I and other admins can ban you permanently if I feel like it. Fair warning; stop being such a dick. Cheers!

P. S. I'm the pretentious douche bag around here. Got that?

Dear Janitors Closet,
Why don't you just fuck off and die?