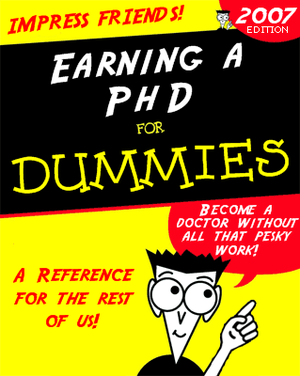 Capitalism's a bitch, ain't it?

In a startling turn of events, the author of several How To guides for the layperson, collectively known as the "For Dummies" series, has earned a Doctorate in Philosophy from Harvard University. When confronted on the irony of this, he said, "It is indubitably unfortunate that this paradox has presented itself in such a manner that I am unable to adequately confront it. Understandably, it is desirable that I continue authoring these tomes, such as the classic Deterring Angry Homeowners from Killing You While Simultaneously Selling Their Homes and Taking Their Spouses for Dummies, for the enjoyment and informing of the casual human being, but naturally it cannot be done in the manner in which it was done before, as I have now proven for the uninitiated and the attentive alike that I am indeed intelligent. This conundrum will likely be solved by next quarter, however, as I like making money. BUY MY BOOKS!"

After consulting Understanding Asinine Smart People for Dummies, the reporter for this story went around the country asking people about their feelings on the situation. The demographic to which the series reaches is far more widespread than one might expect, with avid readers in every state of the Union. Said Mary Kelly of New York City, "I used to wait for new releases, tearing through them, devouring every word. Real page-turners, they were. However, now that I know that the 'dummy' behind it ain't no dummy, I'm disappointed. I don't think I'll be reading his new releases." Her response was indicative of that of the entire country, which is currently organizing a grassroots campaign to boycott any future purchase of a For Dummies book.

The author, who has decided to remain anonymous (as his books all have remained as well), said that he was actually glad of the step up. Bracing himself for another speech, the reporter listened as the author stated, "I am certainly glad of the opportunity to pursue new objects. My desire for quite some time has been to pen a rather comprehensive guide to the human psyche, similar to the works of Sigmund Freud or Salman Rushdie, and now I can achieve it." He does, however, plan to write one more "For Dummies" book and see how it goes. It is tentatively titled Earning a Ph.D for Dummies and will reportedly contain explanations as to how to do just that. When asked her opinion on this, Mary Kelly replied, "Well, I would like to learn how to get a Ph.D..." Wouldn't we all, Ms. Kelly, wouldn't we all.

LATE EXTRA: Publishing of Earning a Ph.D for Dummies has, as of the time of this publication, been halted. Rupert Murdoch, CEO of NewsCorp (parent company of publisher HarperCollins, through which the book was to be published), said "I and senior management agree with the American public that this was an ill-considered project." He went on to apologize to the families of Ron Goldman and Nicole-Brown Simpson, for an unrelated story.

For those without comedic tastes, the so-called experts at Wikipedia have an article about Earning a Ph.D for Dummies.

Featured Article  (read another featured article)
Featured version: 30 July 2007
This article has been featured on the front page. — You can nominate your favourite articles at Uncyclopedia:VFH.