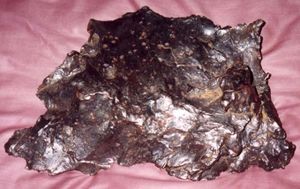 DALLAS, Texas -- home-owner Dick Rasche got a rude awakening when a lump of metal smashed through the roof of their home one night last week. The six pound lump left a hole the size of a baseball in the roof tiles and travelled through the attic space where it damaged several stored items, eventually coming to rest on the kitchen floor. The concerned resident immediately contacted the police.

"I'm kinda a sci-fi fan, I guess," Mr. Rasche told UnNews, "So the first thing I thought was that we were under attack, probably by Reptoids or maybe the Grays. The object wasn't glowing, pulsating or giving off smoke so I grabbed my gun and watched it from a short distance away in case any hatches opened and anything began to climb out while my wife phoned the sheriff's office."

"I thought to myself, man, this has gotta be a hoax when the call came through," says Dallas sheriff Rudy Skrote, "but I thought I'd best go check it out - we all know what can happen in these situations. You ignore it and next thing you know you got little green monsters all over the goddam place eating folks." Accompanied by three of the city's finest, he jumped into his automobile and screeched off to the Rasche family home.

"I tell you, I ain't never seen nothing like it," Mr. Rasche claims. "That lump of metal, well, it just sat there in the middle of the floor without doing nothing - it sure was weird. I'll never forget it till the day I die. It was sort of silvery in color and it looked real hard. I just kept my gun trained on that sucker, daring it to try something, but it never did, never made no noise or nothing. It was unearthly."

Sheriff Skrote and his men immediately ordered the family and neighbours out of their homes, establishing a security cordon around the building. "I wasn't taking no chances," he says, "You just can't be too careful when something like this happens. We had no idea if that thing was radioactive or if it was suddenly gonna start firing death-rays all over the show. I tried to communicate with it verbally, but it didn't reply so I guessed whoever created it wasn't able to speak English. I got all the X-Files boxed sets, so I know you gotta take real care with these things."

NASA scientists were soon on the scene, having travelled by helicopter from the Johnson Space Center at Houston, and quickly set about testing radiation levels with geiger counters. "I don't know what those boys were doing in there," Mr. Rasche says, "But they surely seemed to know what they were about. They had these little gizmos that made some sort of a clicking noise, apparently if the clicking got quicker that meant there was radiation floatin' about. That didn't happen so I guess we were safe on that front." Having established that it was not radioactive, an engineer clad in protective clothing and equipped with breathing apparatus isolated the object in an air-tight container and it was flown to a research facility situated at a classified location for further testing. "We were glad to be shot of it, to tell you the truth," Rasche goes on, "we didn't know if it was about to split apart into millions of flesh-eating killer nano-bots or if it was gonna split open to release some sort of alien doomsday plague or what it was gonna do."

After conducting a battery of tests, NASA later released a press statement revealing that the object had originated on this planet. "We had no idea of what it might be," says Quentin Phlange of the space agency's E.T. Research Laboratory. "However, we noticed that there seemed to be some kind of an inscription on its surface, which we could just make out as " AYB STER 2564 MU CHI G MAC INE". One of our guys here is pretty neat when it comes to solving crosswords and he got to thinking about that. It took him a little while, but he worked out that it had originally said Haybuster 2564 Mulching Machine. So basically, it seems that someone working somewhere near to Mr. Rache's home when an internal part of his mulcher fell into the machine's jaws, got chewed until it was hardly recognisable and was then spat out. Those things got quite a kick to them, I wouldn't doubt it could travel far and high enough to have fallen through the roof of a house."

The theory has gradually gained more adherents, partly due to the fact that an eight pound lump of metal was traced back to a faulty mulcher after a very similar incident in which it crashed through the roof of a warehouse in Jersey City, New Jersey, last week; but largely because it has inspired many people to switch off their televisions and start using their brains.