BRUSSELS, Belgium -- European leaders celebrated the re-creation of the Holy Roman Empire when they announced that Belgian Prime Minister Herman Van Rompuy was now the new Imperial President of the European Union.

In a selection process that included horse trading, back scratching, good old honest bribery and ballot box stuffing , the Flemish speaking Van Rompuy was declared to be the first Emperor of Europe since Napoleon abolished the Holy Roman Empire in 1806.

Belgian chocolates are handed round to bribe persuade others to vote for Van Rompuy.

In a tired and emotional scene in front of Europe's other leaders , Van Rompuy claimed he was now the best known Belgian in history since Tintin and Plastic Bertrand.

...Europe has made a wise decision because I am the epitome of the European Union. I promise to rule as boringly as I can and to make Brussels the great city it isn't. Here , have a chocolate..

It was then announced that a Deputy Emperor-President had been chosen as well , a British politician called Baroness Catherine Ashton. She had won the job in a dance-off to the death with rival choice Carla Bruni . Despite widespread expectation that Carla would win , the other European leaders decided the exotic former ex-nude model would overshadow Von Rompuy in her high heels so they voted instead for Ashton.

News of Van Rompuy's imperial elevation was greeted by an enquiry from United States President Barack Obama with a heartfelt message of support which read :WTF..WHO ? and prolonged laughter from the Chinese leaders in Beijing. The Russian Presidential glove puppet Diminutive Medvedev said he would turn off the gas pipelines to the Ukraine in celebration. 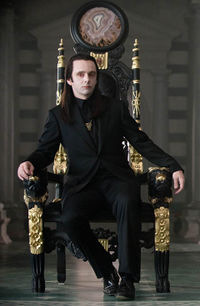 In retrospect , it was a mistake for Tony Blair to order an imperial throne before he was given the job of President-Emperor of Europe.

One person who wasn't seen cheering at the news of the election was former front runner , the ex-British Prime Minister Anthony 'Tony' Blair. Through gritted , smiling teeth , Blair turned up on television news reports with eyes bright red from crying. He managed to say something nice about Van Rompuy.. eventually :

"I have full confidence in Van Rumpy Pumpy. May his little Belgian bum be recognised world wide and let Europe take the top table with the countries that really matter like rogue states including...North Carolina , Liechtenstein and Who's Becky Stahn ?...As I look at history..once again an Antony has been bested by a soggy Caesar Salad."

Blair had recently converted to Roman Catholicism in a move seen by his cynical critics as an attempt to gain favour from countries like Italy and Poland for his Imperial-Presidential ambitions. However ,other political pundits now suggest Blair could apply for the job of Pope once Pope Benedict XVI is unmasked as a major Second World War criminal. Benedict admits collecting milk bottle tops for the Hitler Youth's Kristallnacht raffle in 1938 when he was just plain Josef Ratbringer-Lebensraum.

Since his elevation as President , Van Rompuy announced he was going to spend Christmas in the Vatican where he said Pope Benedict had a 'nice little crown shaped hat' for him to wear on the 25th December.